Snakes are such fascinating creatures. They smell with their tongues! Their ears are internal! And, as any Nokia owner could tell you, as soon as they eat something, they instantly gain another segment of an ever lengthening body. Okay, that last one may only apply to virtual conductive snakes, the kind that stars in Coil, the tiny puzzle platformer that's the latest in Nitrome's initially-icon-sized-but-enlargeable series of games. And, like Flue, Turnament, Ice Beak, and J-J-Jump before it, Coil is sure to have you wrapped around its little finger. You know. If virtual conductive snakes had fingers. And good thing they don't, because we probably wouldn't have the pixels for 'em here. Coil takes the concept rules of Snake and gives them an electric side-scrolling twist. Move your snake wire with the [WASD] or [arrow] keys, attempting to get to each level's goal. 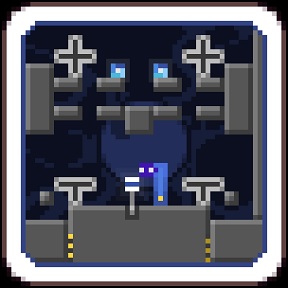 Note your snake wire's special behavior: it is affected by gravity, but will not fall if even a single segment of it is supported. Unlike most video game snakes, it can crisscross itself without injury. And, of course, when it munches on a glowing pixel, its length is extended, allowing it to stretch further and reach new areas. Your snake wire conducts electricity, so if it is in contact with a blue charged platform or battery, it will transfer energy to the uncharged platforms it's touching, something that can help or hinder your progress. Move away from the charged platforms and the disconnected platforms will lose their charge, naturally. There are blocks to be pushed around and length slicing enemies to avoid. Coil is just as intriguing and well-constructed as its icon-sized brethren, if not quite as intuitive. It took a couple of go-rounds and a few screen enlargements for me to work out the electricity mechanics, making one wonder if these tiny games have reached such a level of depth, that the lack of documentation is really starting to become a hindrance. No matter, though. While it takes a little perseverance to understand, Coil has quite the high fun-to-pixel ratio. So go out there and zap to the extreme!

Oh my gosh I am having so much trouble with level 8. I have a feeling that

but I just can't figure out how it's done!

Don't allow gravity to take over. Just step completely off of the saw block and onto the generator block with the same step. Precision is key.

"Ingen ko på isen så länge rumpan är i land!" (Old Swedish proverb: No cow on the ice as long as the rump is on land)

Valid for this game too ;)

I loved this game. Wonderful mechanics, and limitless possibilities.

I'd kill for a full-sized sequel.

> So go out there and zap to the extreme!

I will! Thank you, Tricky!

I'm completely stuck at the last phase of level 13, where

there are two saws and four plain block in a grid, and two big puzzle pieces to slide around. I can turn off both saws, but the snake dies no matter what I do.

I have not enjoyed a nitrome game in a long time. The gameplay had become so frustrating. I did enjoy this one however level 16 needs at least one save point to be more enjoyable for a final level.

It was nice to finally have one that wasn't so frustrating.

silent george,
13 does not have any pieces to slide around. We might be able to help if we knew what level it is.