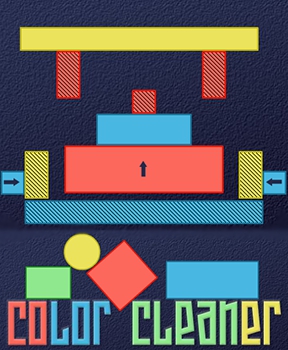 Clicks are a precious commodity. It will only be a matter of time before some enterprising individual finds a way to speculate in clicks. For the time being, however, the number of clicks you're given in the physics puzzle Color Cleaner is going to be strictly rationed.. Developer Mars Yong knows that clicks don't grow on trees. He knows exactly how many clicks you'll need to clear a level of its brightly colored shapes, and that's all the clicks you're going to get. On second thought, it would be morally wrong to go to a black market for your click needs. That's the kind of thinking that loses wars, civilian!

The game is played totally with the mouse. You'll be shown a number of squares, rectangles, circles, triangles, etc, color coded for your convenience, with some of them solid, others marked with diagonal lines, and still others bearing arrows. The shapes marked with diagonal lines are fixed in position and cannot be moved by anything. Solid shapes are affected by normal, downward gravity and can also be moved by momentum or being pushed. Shapes with arrows on them push in the direction of the arrow but can also be acted upon by other shapes. When you click on a shape, that shape and all shapes that currently touch it of the same color disappear. The object is to make all the shapes disappear with the limited number of clicks that you have.

The gradually slowing down music box that forms the soundtrack of the game is admittedly creepy, but thankfully can be muted in the pause menu or by pressing [m]. It's rather incongruous with the straightforward, plain shapes in the art of the game. The level design is where the game shines. The levels do require timing but this is not a game that will have you flailing about with the mouse or cursing your luck. The skill it requires is much more a matter of spatial logic and planning than reflexes. If that sounds up your alley, give it a try.

Ok, there is a mute button, but please put it on some intuative place. (And its a fault of adobe not having some common hardcoded place for mute)

I enjoyed this game. Fairly easy, I was able to beat the whole thing in less than half an hour I'd say, but still fun! A lot of it was just guess and check for me, but with unlimited lives that's no problem. Fun little diversion to break up your day!

Nicely challenging, and I like the cute little 'yay' on successful completion of each level. Mixed feelings about the music though...
Great walkthrough :)