Coming later this year from Hailstorm Games for PC, Mac, and Linux, the indie horror game Claire, currently up for voting over on Steam's Greenlight service, shows a lot of promise. The story follows a girl named Claire, who has spent her entire life being plagued by horrors and nightmares, and now, as an adult, finds herself trapped with her loyal dog in a twisted world full of things that want to do her harm. There, she also encounters people who she can possibly "redeem"... but might have a greater connection to her than she could possibly imagine. 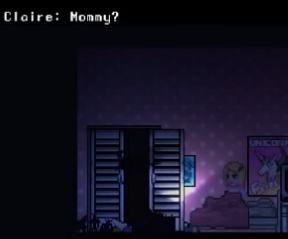 The game itself will be a survival horror adventure with a few twists. You'll play as Claire throughout multiple stages of her life, and in addition to finding items to restore health or caffeine to stay awake, the game is tied to Claire's panic level, which means that the more frightened she gets, the scarier the game gets in response. Throw in the promise of multiple endings and even multiple modes, as well as the possibility for player made levels, and you have a game that looks like something horror fans should be keeping their eye on and give the ol' thumbs up if they'd like to see it on Steam. And why wouldn't you, since the game's other selling point is Claire's trusty constant companion, her German Shepherd, who can help you find things and stay alive? It is a true fact, as classics like Secret of Evermore have proven, that games are approximately ten times better by the inclusion of a stalwart doggy companion.

Hopefully in the near future we'll see more details begin to appear, such as pricing and a better idea of the gameplay, preferably through video, but in the meantime you can check out the Steam Greenlight page to learn more and give it the thumbs up like Kronk always wanted.