Redshirt, the upcoming RPG-sy sci-fi simulation game from Positech and The Tiniest Shark, is basically a love letter to all of us who desperately wish we had been born on a Federation starship instead. A love letter, and a wake-up call, since the game is less about you being an interstellar butt-kicker and more about being the sort of expendable floor-cleaner that made those big ships run behind the scenes, which, let's face it, is probably the most likely scenario for a lot of us.

Taking place entirely through your ship's social media network (Spacebook), it plays a lot like a space-themed Kudos title. You manage your life, relationships, and your career as you grow and advance in all of them... but you primarily do so via your interactions with your fellow crew members through Spacebook. You plan events, everything from holo-deck adventures to parties in the crew quarters, you schmooze your bosses, your Spacebook-stalk your crushes, maybe induldge in a little "vaguebooking"... and... stumble across a secret conspiracy nobody wants you to know about? Hmmm... 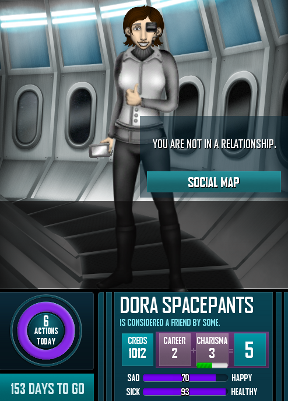 If you're like me and only maintain social media connections to make sure you remember family birthdays, the concept of an entire game set around liking status updates and and tagging your coworkers at parties sounds... less than stimulating. And yet, surprisingly, Redshirt manages to make it not only fun but addictive. A large part of this is due to how much personality and character the game packs into every aspect, from the various distinct alien races to the quirky details that make up all the little jobs that make the ship run... all of which you can apply for, right up to perhaps, one day, becoming Number One. (I wouldn't try for the beard though. Only one man can pull that off.) Each day, you'll go to work, interact with your friends and coworkers, and increase your skills through a variety of activities to improve your character. Who, incidentally, can be any one of a number of species, sexualities, and even genders... Redshirt allows to to pick male or female, but you can also simply use a slider between the two without settling on one, or choose to make your gender private. 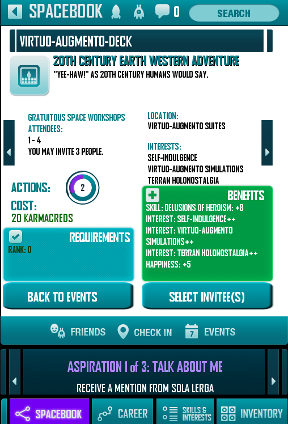 The downside is that because so much is randomised, your Spacebook friends wind up having zero personality. Sure, their chatter is entertaining, but it's also largely meaningless, and as they all spout from the same pool of lines, they start feeling like, well... bots, and as a result it's hard to care about them beyond another stat to be accumulated. Which, of course, might also be seen as a commentary on social media in general. The other more obviously satirical aspect of the game you'll come to dread as a character are the away missions, which... rarely go well for any of the people you're sent out with (more literal guts than glory) and can be a real downer for your character if you don't have the funds and friends to cheer yourself up after. But with an enormous amount of replay value, a snarky, silly sense of humour, and that one-more-turn addictiveness we all crave, Redshirt should definitely be on your radar. Hit up the official website for the trailer, more screenshots, and to pre-order the game... which also grants you instant access to the beta version!