Have you all gotten your daily recommended value of Vitamin C yet? No? Then how about a big ol' dose of Cover Orange to perk you right up? Johnny-K and VladG are here to roll out the latest addition of their scurvy-preventing physics puzzle game series. The cutest fruit on the Internet (and the iOS and Android marketplaces) is going West, young orange, going West in Cover Orange Journey: Wild West, but as always, they're being dogged by the meanest, spike-ball-spittingest storm front this side of the OK Corral. So much for "The skies are not cloudy all day"! It's your job to get these little doggies to safer pastures by pushing them, bouncing them, and, of course, covering them up by dropping objects into the stage with the mouse. When Mean Mr. Cloud does come a-calling, make sure every orange is tucked somewhere safe they can weather the storm! 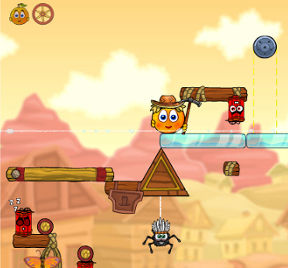 One helpful feature the series has is the fact that you do not have to play levels in order. No matter which levels you play or skip, there are always three levels open to you, and you can tackle them at your leisure. If you get too stuck on your current selection of levels, you even have a small number of hard hats you can use to pass levels and come back to them later. It's extremely handy, especially because the puzzles in this installment are tricky and many require out-of-the-box thinking. However, Wild West isn't without changes to the Cover Orange formula. The star ranking system from the other "Journey" entries in the series is gone, as this game takes things back to basics with a simple numerical score given for each level. The simplification of the scoring helps the game feel a lot more focused, and you don't have to constantly scan the background for randomly appearing stars like you do in the other installments. Within the puzzles themselves, the new feature this time around is bouncy drums that you can ricochet items off of. They give the new puzzles a more fast-paced, "action-y" feeling, and the physics of the actual bouncing work consistently well. The particularly tricky puzzles here means this one might not be a good fit for newbies to the series, so you might want to acquaint yourself with the previous Cover Orange games first. But for the old (ten-gallon) hats, Cover Orange Journey: Wild West provides some juicy new challenges.

7,262 Views
7 Comments
chrpa— Jayisgames needs your help to continue providing quality content. Click for details Few months ago we played a nice little game by Seal Dog (WE N°319) and could be seen then that the dev is promising. It wasn't just...  ...