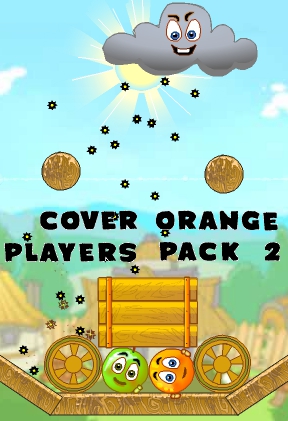 Knock Knock! Who's There? Orange! Orange who? Orange you glad that there's a brand new pack of levels for Johnny-K's physics puzzle series Cover Orange? Hey, I know I am. And while Cover Orange Player's Pack 2 might not have the prize money backing it up as the first one did, but it's a concept that's still quite fruitful when it comes to fun.

Not-broken gameplay isn't fixed, with mechanics the same as previous entries, backed up by the box2d physics engine. Using the mouse to direct and click, you drop variously shaped objects from the top of the playing field, trying to place them such that they cover or push to safety all the oranges and apples on the screen. Once all the objects have been place, Mean Ol' Mr. Cloud will come to rain spiked balls on your picnic. A few hits from those will ruin the easily-bruised fruit, so make sure they're prepared for the storm! Also, be sure that you prevent them from falling off the screen or getting to close to a bomb: we like our fruit visible, unspiked and unexploded. Sometimes its about skillful placement of objects, sometimes its about timing and sometimes it's about speed. No matter what the time is though, it is quite enjoyable.

There is very little I can say about this second pack of Cover Orange player-created levels that hasn't been said in previous reviews. The visuals are as bouncily cute as ever, the puzzles range from the amusing to the tricky, and the fifty levels should keep you entertained for quite a while. The lack of hand-holding means it's not a particularly great jumping-on point for those new to the concept (though I would certainly recommend the previous installments!), but fans of the series, or physics puzzlers in general, will have a fun afternoon with Cover Orange Player's Pack 2.

how to pass the 50th level?