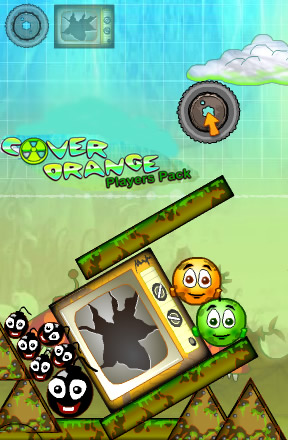 joye's journal, April 5, 2010. Fruit in the alley this morning, spikeys on its rotten skin. This player's pack is afraid of me. I've seen its true face—the acid one, not the sweet facade. The background is a sewer and the sewer is filled with an evil green glow. The spikeys will rain down from the evil laughing cloud in the sky and all the apples and oranges will look up and shout "Save us!"... and I'll whisper "Okay, but just one more level."

Aside from an optional "acid" reskin, Cover Orange: Players Pack keeps the same mechanics as its predecessors. That's because this game contains the winners of a level design contest. There were $4000 in prizes, including a $1000 prize for the top level, which is something pretty cool to think about when you're playing it. "This single level cost $1000. Wow. I had better have a really good time."

And you will, because the variety and creativity of the levels has something to challenge and delight every style of player. Using the mouse, you click to drop various objects onto the field, manipulating the things already on the field so as to place the fruit in a position where the spiky balls of death from above can't hurt it, keeping in mind that falling off the screen or being too near to a bomb when it goes off will also kill the fruit. There are levels which are about finding that perfect place to set off a chain reaction. Other levels require rapid clicking the moment the level loads. Still others require patience and timing.

With eighty levels total, there's plenty of game time here as well. That just leaves one question: who covers the coverer?

And the answer to that is, my blanket. *snuggles*

any help on number three?

Holy wow there are a lot of levels! I got to level 38, but 80 levels is a bit much for one sitting for my casual gameplay. It may be a while before I get to try this "$1,000 level". But it had better be one darn good level!

The timing might be a bit tricky, but you have to drop the crate from fairly high up onto the far left end of the pipe as the orange is rolling to the right. This will launch the orange and get him to bump the cart, which will keep him safe in the hole on the bottom right.

I love this strategy game. I got to level 5.

When I've gotten stuck on a level, I look at the solution just to move on, and I have noticed that some of the solutions do not look like the level that you play. On level 56, you get 4 wheels. In the solution, they show 6. Would be nice for the designers to fix this, since 4 wheels isn't enough to get past the level.

Some very creative levels here. Several have nice red herrings to mess with you.

Only ones I don't like are the instant-death ones, where you have to quickly do something. Sadly, there are a whole bunch of them in a row around level 26 or so. I'd probably go back and change my vote to a 4 because of that, if I could.

First 34 levels and no major problems. I think I even prefer these levels to the official ones. And I do not mind the instant-death ones, since timing *is* an integral part of the game. Not to mention that the instant-death levels so far are rather easy.

I do worry if levels further down the line are unsolvable, though, if what the upper poster says is true...

It's a mixed bag...I think it gets a little too twitchy in the insty-death levels, myself. I liked to think the game was about planning, not "drop two barrels in the right locations in .2 seconds", which is what some of them turn out to be. I now hate opening a new level and something is already moving; that's a bad sign.

On the other hand, in some levels you don't really have to do anything. Drop one wheel in the only obvious location and you're done.

Oh, and level 56 did have six wheels for me---which even then seemed like barely enough.

Finished! Really enjoyed the game! Some of it is just dumb luck that it worked, but the strategies are great for getting the mind working! Thanks everyone for creating such great game levels!