Resurrected from 2007 where it rested in relative obscurity, Crazy Machines: Inventor Training Camp is a follow-up to the original Crazy Machines game that features more Rube Goldberg-like physics puzzles. Use a variety of objects to assemble crafty "devices" that accomplish different tasks. The setup is something you might see in The Incredible Machine, though Crazy Machines streamlines the process with much simpler building mechanics, fewer pieces to fuss with, a better visual presentation, and more directed goals. 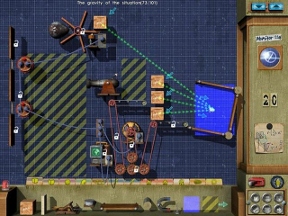 Each level has a specific task you need to accomplish, usually something simple like knocking a basketball into a container, pushing a box across a shelf, or knocking over a few dominoes. Accomplishing that task is anything but simple, as you'll be employing tons of crazy contraptions to get the job done.

Everything is still to begin with, allowing you time to pick up pieces from your inventory and drop them on the playing area. You can control the direction, angle or function of many objects by clicking them and choosing from the array of options that appear in the overlay. It's most useful for lining up planks of wood to serve as smooth platforms for balls to roll down, or setting magnets so they pull in the correct direction. Once you think you've got everything in place, click the big green arrow button to set it all in motion.

Well... how'd it go? Did you open the trap door, set the mice running, knock the marble onto the frog which caused it to leap to the tower and knock down the box that activated the robot which pushed the crate to the goal? No? Good thing you can try it again! Pause and tweak your inventions as often as you like, but keep in mind your bonus score ticks down with each second.

Crazy Machines: Inventor Training Camp includes a personalized "lab" that allows you to create and experiment with your own puzzles. Everything featured in the main game is at your disposal, so go nuts with boilers, gears, gravity-altering devices, bombs, fire-based things, and cannons. Yes, all of that is in the game and yes, it's as cool as it sounds! 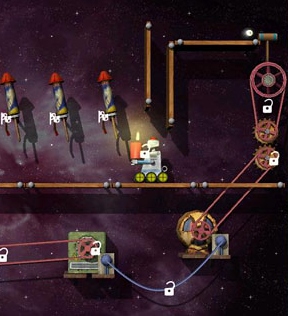 Analysis: The Incredible Machine, Armadillo Run, and even Eets are just a few of the milestone building/physics games released in the past few decades. Each one sticks to the same basic formula but adds some new gameplay concept to make the experience unique. Crazy Machines adheres to the notion that creating realistic Rube Goldberg devices is an awesome thing to do. It's correct, of course, and the presentation allows you to enjoy that to its fullest.

Physics in Crazy Machines: Inventor Training Camp are superb and mimic real-life behaviors remarkably well. While I admit I've never used a magnet to pull a falling pin across the room to pop a balloon, it would probably happen something like Crazy Machines illustrates it.

Crazy Machines: Inventor Training Camp is often referred to as Crazy Machines 1.5. And for good reason, as it's not a proper sequel, more of a hefty expansion pack that features loads of new levels and a few new features to play around with. There are just over 100 stages to complete, the first third or so being more tutorial in nature while the latter really crank up the challenge and complexity.

I don't think it's possible to have too many physics puzzle games, especially when they're as quirky, well-crafted, and fun as Crazy Machines. You won't regret spending time with gem of a game, especially when you discover you can turn the professor's annoying remarks off in the options menu!

Special thanks to Walzar for this fabulous walkthrough!

Well, crazy machine II has released for long. It is way better than this.

Special thanks to Walzar for this fabulous walkthrough!