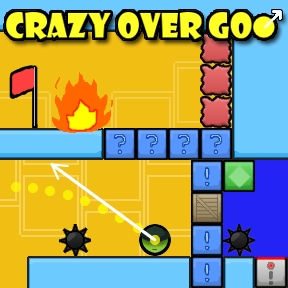 In this physics-based projectile platformer, you play a malleable but mostly rigid ball of goo on a mission to find another goo ball with a pink bow. Your quest will take you through six worlds (plus a bonus world), each with nine unlockable levels. You control your ball's trajectory by dragging and releasing the mouse. Like golf, the object is to get to each level's flag in the least number of jumps. To make things interesting, some jumps can occur in midair, requiring nimble mouse control (head's up, laptop users).

Practically every platforming element from other games is here in Crazy Over Goo. You have your midair jumps, ninja jumps (off sticky walls), and jumps onto spinning throwers. There are special gravity-affected areas and switches that flip the screen upside down. Some levels are dark, with illumination around your goo ball. Other stages have pushable buttons and keys that unlock closed-off areas. Deadly spikes and firepits dot the landscape.

While much gameplay is familiar, however, there are some new elements as well. Some levels require you to set your goo ball ablaze to burn down wooden barriers, though you'll need to quickly find a water area to extinguish the flame before you burn up. There are also interesting levels containing various sections that restrict or challenge your goo ball's leaping ability.

Overall, Crazy Over Goo is a challenging but fun break game that will keep you entertained. Fans of the original and newcomers alike will appreciate this update's simple but slick-looking visuals and fun sound effects. And with its new levels, game modes, medals, unlocks, customizations, and a comprehensive level editor, there's plenty of gameplay to go around. At the same time, some levels are indeed tough and may lead to a small measure of frustration, but all are beatable with a bit of persistence. So ask yourself: Can I save the pink-bowed goo? Fulfill the cliché and find out!

Anyone else notice that the ball makes the same noise as in minecraft when you shoot your bow?

Is the world running out of sound files?!

Fun concept, but it's got some poor execution. first and foremost is using mouse for game controls, but requiring me to go back to the keyboard for the reset button. Several of the gold medals require pixel-perfect jumps and take way too many attempts, even after you've "solved" it in your head.

I really want to play this game, but the slight delays that come up when the ball is swinging make it more frustrating than fun. In addition, when the screen moves as the ball swings, my eyes and cursor don't know what to focus on. I'd like to enjoy this game, but it's making it hard.