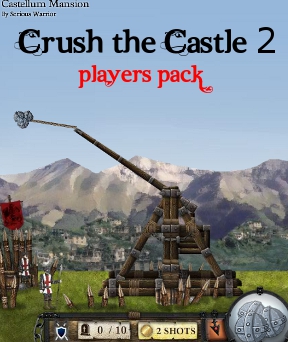 You may have felt a little bad about laying waste to vast swaths of castles during the previous three iterations of the Crush the Castle series. After all, for the most part, the princesses, kings, knights and so on just seemed to be standing around in their extremely drafty homes, minding their own business, only to explode into a fine red mist thanks to your physics-powered projectiles. But in the newest game from Joey Betz with artistic collaborators Con Artist and Jimp, Crush the Castle 2: Players Pack, you have a totally legitimate reason for killing without mercy: there's a zombie plague going on! And if there's one thing I learned from living in Pittsburgh, it's that when the zombie plague starts, put bullets in heads first and ask forgiveness later. In addition to many levels of user-submitted goodness, there's an "undead" mode exclusive to registered users of ArmorGames where you must use your mighty catapult to keep back the hordes through ten days of defense gameplay.

The basic control scheme is simple as always: click once to start your trebuchet's arc, click again to release its payload. In regular levels, the camera will pan over the field giving you a view of your target, and you'll need to use this information to time your release. You start out with a number of different projectile options, from the simple log to a trio of iron shells, and as you progress through the game you'll unlock more options, either through regular gameplay or through special achievements. There's a way to unlock a certain enraged avian, for example.

In Undead Mode (which you need to register a free Armor Games account and login for), you'll start with just the log, and you won't have the luxury of carefully lining up your shots, as a shambling mob is coming ever closer. It's important to remember to click to reset while playing in this mode so that you can fire faster. Between days, you can spend money buying better projectiles, ending with an enormous rock that with proper release basically steamrolls an entire screen's worth of zombies, which is very satisfying.

So... You're a Pittsburgher and a Zombie fan... Awesome! Do you attend ZombieFest?

I no longer live in Pittsburgh, D. Walter, having fled for the Great White North after marrying a Canadian. But Pittsburgh is still one of my favorite places in the world.

It's pretty fun, but it suffers from the typical problem of user-made puzzles: fake difficulty. While some levels were genuinely challenging, many others simply devolved into attempt after attempt at hitting one tiny little spot. I gave up after around my 100th reset on the King's Den. Also, there's a glitch on "Use the Force". The author claims to have fixed it, but the level was still impossible to medal for me.

Seem the game is eihther glitchy or exceedingly generous: I opened a castle but then had a phone call, before I could make a shot. After about 5 minutes I hear the fanfares - and see that the castle's crushed... All by itself apparently...

Did you try bouncing a remote bomb under the wall? Worked for me.

1. Do you get a tax break if you make a zombie game? Is that it?

2. Why does every browser on my computer seem to dislike Armor Games?

Is there some trick to the level "Use the Force"?

I can get the shot with the lightning weapon on the metal bit at the pinnacle dead on, but one of the knights refuses to fry! D:

@Onyx Mouse: I'm having the same problem with "Use the Force".

According to the video walkthrough, you use the lightning weapon, and one knight then survives. Then the author of the video seems to just wait around for about a minute, and suddenly one plank starts moving by itself to crush the remaining knight (thus 'the Force', I suppose). It is unclear whether the video's author is doing any hidden key combos. For me, just waiting after the lightning shot didn't trigger the Force...

Good series. The only thing that annoys me is how so many levels have the same easy solution, you just throw fire or acid at the very top of the structure and wait.

I get a lot of enjoyment from hearing the people scream in pain.

Is there an explanation of what exactly will kill a figurine? As I see it seems pretty random. Sometimes the guy tipping over on the ground is enough kill it, but sometimes heavy stone parts falling on him from the 2-3th floor won't make him die... As I see, it doesn't matter what kind of gus it is - a queen, a peasant or a knight in full armour... I had a peasant holding 2 floors of stone that had fallen on his head and lived, while his buddy was done in by the wooden plank tremoring under his feet...

There is a way to beat "Use the Force" in one shot - the key word is patience:

just crush it in as many shots as it takes, to beat the castle. No matter if it's not from 1 shot. Then go on and complete the game. If you crushed all catles, you'll get some kind of special potion. Go back to the "Use the Frce" level then and use that potion. If you hit the castle, it'll get the job done.

Otherwise I agree with the others: the level seems buggy. I did what is supposed to be done about 5 times and the knight always stayed there, refusing to get fried - and even waiting for minutes didn't help like in the video.

Is there a way to shut off the music? Maybe I'm just not seeing it. But at the risk of seeming petty, that seems like a pretty standard option these days. If you happen to be doing _anything_ else on your computer and don't want to listen to bombastic synthy war music...

Found an easy way to clear "Use The Force" in one shot:

Clear it out in any way you want first, forgoing the gold medal. Once you clear the game, you get a new weapon. Go back and use it.

Ancient weapons and hokey religions are no match to a good black-hole-inducing potion at your side, kid.

I've completed the game last night and got all the achievements but one: Can anyone tell me where the Armor Games flag is?
I need to destroy it.

Hey Ambisinister-- there's a few flags lying around in there, but I don't remember where offhand. Luckily, if you're just achievement hunting, bear in mind that achievements can be successfully unlocked in the user submitted castles (accessible on the main menu under "Citizens Empire"). And so if you were to go to, say, this castle, you'd be able to hit a flag pretty easily.

Only place I saw the Armor Games flag was on "Barrel Balance" back behind the rock formation. Only way I can think to hit that is with the parachute-bomb.

...I tried, tried, and tried some more on Barrel Balance, but I just could not get the flag. >> Parachute bomb doesn't go that far...maybe you have to suck the whole thing in with a

and then you can do it? Dunno since I haven't completed the game yet.

I found out how to get Rock & Roll Achievement!

Get all gold medals on all castles. You will get one big rock. Destroy (any?) castle in one shoot with it. I get it when I 1 hit destroyed "Let's Roll" castle.

Just give up trying to hit the Armor Games flag in "Barrel Balance". Hit the one in "See Saw". They're both Armor Games flags. Hint: You can get the achievements also in the Castle Builder.