When a maaaaaaaaaaan loves a woooooooh-muuuuuuhn... he does some very stupid things. And when that man is a king with more boulders than sense and that woman is Lady Catapult, who wants him to prove he isn't a weakling, well... things start getting messy. In Joey Betz and Jimp's Crush the Castle Adventures, the latest installment in the often imitated, never duplicated projectile-based physics puzzle Crush the Castle series has arrived. Fireballs? Bee bombs? Sticky inflat-o popping ballistics? Awww yeah, now we're cooking. I cannot stress enough how entertaining hurling hives of angry bees at confused and terrified people is, mostly because I don't want to get on some sort of government watch list. 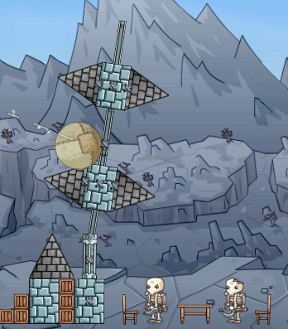 Click anywhere onscreen to start aiming, which will make the trebuchet start swinging forward, and then click again to let it fly. The goal is each stage is (usually) to get rid of all those smug jerks hiding inside their precariously built castles by bringing it down on top of them. Some stages will have bonus requirements to get the best ranking, such as avoiding smooshing a certain individual, or doing it all in only one shot, or with a certain ammo type. You'll need to think creatively in addition to aiming true, since the castles can both be made of different material types, and cleverly designed, forcing you to figure out how to use their environment against them. As you get different types of ammunition, you can swap between them by clicking on their icons.

Though Jimp's art style is certainly a drastic change over the simpler and more realistic design of the original game, for my money, it's a change for the better. Packed with detail, colour, and personality, Crush the Castle Adventures might not be simple enough to appeal to the purists, but it's also vibrant and entertaining in a way its predecessor never was. The level design is really fun and intricate, with most stages feeling like puzzles to be solved rather than just material to bulldoze through. At the same time, not only does it take a while for the difficulty to ramp up to the point where flawless victories require any significant amount of thought and skill, but, well, it's hard to deny that some levels just aren't about crushing castles whatsoever, which is sort of the entire point and draw of the series. Give it a chance, however, and Crush the Castle Adventures might just win you over with its sense of humour, piles of levels, creative design, and of course, bee bombs. It may be in some ways a different beast than what you remember, but taken purely on its own merits, it's more than a little fun, especially if you like throwing bee hives at people. Simulated video game people, I mean. Stop looking at me.

I can't figure out how to aim this thing. I remember it being much easier to do in previous CtC games.

"Often imitated, never duplicated"? Do the folks behind Angry Birds know that?

That would be the imitation, SL.

Really, Rygar? Aiming in this one is exactly like the others: extremely difficult

yeah. i hate the ones that require pixel perfect launching (middle of the undead map, the counter catapult anyone?)

These are fun but get... annoying because you need to have pixel perfectness on some of the throws.

It seems the pay to insta win concept is becoming commonplace and that really really bugs me. I honestly would rather be bombarded with ads than have to pay to be good at a game / get special items / all free-to-play like things

I had this vision of Sushi Cat crushing castles.

I'll have to play it to find out if this vision comes to pass. Lady Catapult is a harsh mistress.

Anyone else finding it choppy as hell on some stages? Doesn't matter what level you have the graphics set to.

benjabby, yeah, not a fan of the pay for extras model.

Anyone else notice that you can pass a level without getting all 3 coins or whatever, say you need to score 100,000 points to get a coin, you can go back get the coin while breaking the other requirements, like only taking one shot?

Well, the choppiness issue seems to have been solved, but now a whole new problem has cropped up: whenever I clear a level, the fanfare that plays

The only way to get rid of it is either to mute (and it comes right back when I unmute), or restart the game.

Lovely game, but super laggy and crunchy, even with the graphics set at the lowest option. And with real precision required at some levels this stutter makes it almost impossible. And it chews up loads of local memory.

I'm sorry to hear everyone is having lag issues. :( I experienced no lag or stuttering whatsoever while playing on the highest setting or I would have mentioned it.

I had no lag or stuttering issues at all.

As far as the lag issues go there is a screen that pops up saying that this may happen and to upgrade your Flash player, blah, blah, blah and you can also disable some things like blood and gore which does help cut down on the frame issues.

It's a fun game. I like the comedy style, and the game play is a lot of fun. One thing that I like about the other CtC games that is lacking in this one is getting more powerful weapons as the levels unfold, and then being able to take those weapons back to earlier levels and kick the ever-loving crap out of them. Especially on those levels that gave so much trouble earlier on because you needed a near pixel-perfect hit to make things happen with the weaker weapons available at the time. That, and them wanting me to shell out $7 for a more powerful siege weapon is quite steep. I could see $1, but not $7. Overall, I'd give it a 675158973 out of 1000000000.

It kinda sucks that the Temple Sacrifice stage in the Bubbling Burrows level cannot be completed in 2 shots. So I'll never upgrade past King now. :(