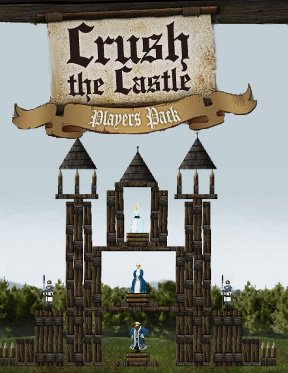 There's something satisfying on a primal level about rampaging through a playground, kicking over the painstakingly built castles of sand and blocks while their toddler creators shriek in the background, their impotent fury the perfect orchestral accompaniment to your mastery over the destruction. Of course, once you get to be a certain age, people tend to frown on such activities. So we turn to games like Joey Betz's Crush the Castle to fill the void with good ol' fashioned physics warfare. And what better way to revel in your uncontested might than by partaking in Crush the Castle: Players Pack, a collection of new maps awaiting your siege skills made by players hungry for destruction, just like you.

That's right, gentle reader. The Players Pack is made for fans, by fans. While some of them have presented us with straight-forward levels, there are still a surprising number of castles which more closely resemble lovingly made Goldberg machines, brought down by a chain reaction from a single precise hit. Of course, how clever you actually find these castles depends largely on whether or not you have a case of I-Could-Do-Better-Itis. Well, the good news is the level editor is still there, so you can easily show your friends (and us!) what you can do.

The physics here are still decent, but a little shaky. One wonders where all these soldiers are trained that they can be destroyed simply by brushing up against the side of their own fortifications. At one point, one of them shrieked in agony and died a bloody mess after he teetered into the walls ever so slightly. I don't know, it does make the job easier, but it also makes me wonder if maybe their castles would be better defended if they'd stop hiring people made out of spun glass and childrens' wishes.

If you're a fan of the original, you'll probably enjoy the Players Pack as an extension of the gameplay, but you may be disappointed by the lack of any real major additions to the game. If some new ammunition and medals to earn is enough for you, then fire away. The Players Pack may not bring anything revolutionary to an already well-loved game, but it does provide a lot of enjoyment and showcases just what people are capable of building if you give them some wood, some stones, and promise to smash it to bits when they're done. That's the best kind of teamwork. Kind of makes you feel all warm and fuzzy, doesn't it?

After a few levels, it begins to lag horribly on my end. I have to reload the whole thing.

This is mine: Scout's Bunker http://armorgames.com/AOoi

The share IDs don't seem to work for me.

Is anyone else having trouble getting to a shared level?

I made another. This can be cleared with a single shot of a single small rock, and it's really satisfying to do so.

Behold the power of a high center of gravity!

Works for me Jay

Hmm, ok, now they're working for me, too. Weird. I tried narpas' link 3 times before and every time it took me to the game main menu instead.

Last one from me. This sorceress can fend off your arsenal. Gold is two little bomb clusters!

here is my level i call it reinforced it's easy to topple the first part http://armorgames.com/kGPo hope y'all enjoy

Backdoor:
http://armorgames.com/Zq8n
(Sure you could just bomb the area around him until he dies, but can you hit the back ramp with a single stone?)

Has anyone managed to destroy 'Strong Tower' on the third island (winterbale)? I have 3 very alive and well guys buried under an avalanche of stones and I'm feeling a tad frustrated :).

@Xiao sometimes the way the stones fall make levels impossible with the weapons that you have. Reset and try again!

But go crazy first and launch as many volleys of stones as quickly as possible... maybe that will do the trick. Otherwise, reset, beat, and come back later with upgraded weaponry to get the Gold medal!

Alright. Hatsworth Castle Gold. Any tips on how to bring this one down in 1 throw?

Yeah Camron I've been trying hatsworth for a while now...can never get the bottom 4 guys to fall...

how do you get the 3 large bomb cluster?

Just like samalakar, I've gotten a gold medal on all areas, but my screen says 50/2800. I even went through and got 1-shot on the puzzles that only required 2, but still nothing.

I wonder what else we're supposed to do.

@Brandon 50 gold medals and you get the triple huge bomb cluster.

Just beating all the levels gives you the single huge bomb (I think).
Makes getting all the golds MUCH easier.

I FINALLY got Hatsworth Castle on one try! I hit the guy standing on the left ledge (the furthest guy to the left not including the guy on the ground)with 1 bomb, and the other two bombs hit just above him, slightly below or at the corner where the two guys are standing above it (also on the left). I hope this helps. It took me about 100 tries to get it! Michelle

On Hatsworth castle, I got frustrated and kept making unconscious throws, and eventually, I think the bombs hit the bottommost room at the SAME TIME. The impact was so strong that the left half of the castle was blown apart almost instantly, and pushed the right half against each other. Kickass.

if you are stuck in a level... try reloading the page... I had to do it in order to pass the last levels... Amazing game!

I think it's hilarious to get all the golds and earn the three mega bomb grouping. blows the crap out of everything.

LOL @ GlayWare I read your comment and did the same thing literally next try.

A bit late here, but here's one I put together:

I've managed to take it down with just one small bomb... Once. Can't seem to do it again.

Here's a really hard level. See if you can do it:
http://armorgames.com/sRb0

I just did koslin w/ a mega bomb. A stone wall just landed STRAIGHT on the back guys head. It was really funny.

Easy way to beat hatsworth is the beat all of the castles regardless of medals. Then use the super bomb and aim at the first horizontal beam from the bottom. i got it on my first try!

First of all, great game; loved it. Had a lot of fun, although I did have a problem with the hatsworth level, but perseverance paid off and I finally got it. Secondly, I finally got all gold medals (50 of 50) and acquired the Mega (3x) bombs, but now there is nothing to do. So what was the point of getting gold on every level (essentially beating the game) just to get a fancy-shmancy projectile that really does you no further good? A more realistic approach would have been to acquire the mega bomb once you get *any* medal in all levels, then use it to get the gold for each level. But that's just my opinion. And lastly... did I mention it was a lot of fun?

great game. like others, i have got gold on all 50 levels and - like others again - have gone and ensured i've done all 50 in one shot but (i) haven't got the mega bomb cluster and (ii) still don't understand why it says 50 of 100 medals. any ideas on these two? thanks

I'm stuck on Hatsworth Castle. It is annoying me because it lags and when I press fire it reacts after and drops bombs on the floor.

I agree with cornelius from above. I got all gold on all castles just to get the bomb cluster, and have nothing to use it on! Went through and just blew things up though!! Great stress relief.

hatsworth castle. 1 big bomb has to hit the 2 floor floor (not a repeat word, literally the floor of the 2nd floor) 1 big bomb, ill try again later with 3 for fun.

Gold with 1 large is possible

http://armor.ag/hg76 (check this out) its pure sickness

It is hilarious when a guy flies up in the air and lands on another guy and kills him.