Quirky characters, dungeon-crawling RPG strategy, a sense of humour... Emmanuel Salva Cruz's Crystal Story was a surprise hit, voted Best RPG of 2011 by the community. So a sequel? Yes, please! Crystal Story 2 takes place a long time after the events of the original game have turned to legend, and begins with a boy falling from the sky wrapped in a comet. Which, you know, isn't something you see every day. Almost every day, but not every day. This is our hero, who, as it happens, is also a dragon if the scales and tail didn't clue you in, and he's been sent to see the Oracle on a mission of utmost importance!... but, uh, doesn't really have any idea what an Oracle is. Before he knows it, he's fallen in with a "treasure hunter" who promises to help him, but his journey is just getting started. 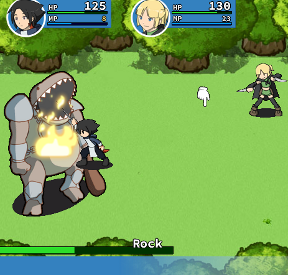 Crystal Story 2 offers a lot of control options... you can use [WASD] or the [arrow] keys to move around, or you can just click on the map to walk to that location. If you touch an enemy onscreen, you'll enter into a fight, and any other enemy that was onscreen at the time will join in! Battle is more of a Chrono Trigger/early Final Fantasy affair this time around, with characters taking turns attacking when their icon reaches the top of the meter at the left of the screen. This time around, there are no experience points and levels, and instead your characters grow stronger by equipping various items that change their stats, or by spending SP earned from battle. Each character has their own set of skill paths, and unlocking new abilities and upgrades by spending SP will not only teach them new things, but can increase their stats as well. Once you acquire all upgrades in a given path, you'll be allowed to unlock another class of your choosing, which offers more upgrades and skills of its own!

Where Crystal Story was sort of a mission-based dungeon-crawler, the sequel feels a lot more like a traditional RPG, and not just in the scope of its story. You'll wander a world map and visit different locations, though towns are still subject to the original game's menu-based interaction to shop, sleep, and slime. By visiting a certain familiar place, you can pick up various sidequests to earn a bit of extra bank and items. Additionally, you can use Alchemy to create new weapons and items by combining others, or spend scrap metal on upgrading the equipment you already have. True heroes recycle, after all! 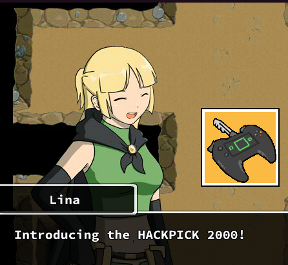 Analysis: Without getting too "back in my day" on you, I've been playing RPGs since Zelda began, and every once in a while I look at RPGs like this, available online, for free, to anyone with an internet connection, and my mind sort of boggles a little. Though it may be a little rough around the edges, Crystal Story is still a formidable game in its own right, with animated cutscenes, voice acting that's actually very well done, and a familiar but enjoyable story with a light-hearted sense of humour. The game's strength lies in its characters and its combat, since wandering around "dungeons" tends to be boring simply because the maps and environmental art are very bland. Seen one identical square room with static backgrounds and borders, seen 'em all, and you'll definitely see way more than one.

Though it might look like a lot has changed, most of the differences between the original and the sequel are actually fairly cosmetic. You are, after all, just swapping out EXP grinding for SP grinding that accomplishes the same things, and for the most part characters don't have a skill tree so much as a linear skill root, though it does occasionally offer a choice between upgrades. That's not necessarily a criticism, mind, just an observation that there's not quite the need for panic in the streets that a more substantial mechanic overhaul might have called for. The "hacking" minigame to unlock treasure chests is a little obnoxious, largely because it feels gimmicky and unnecessary. One of the more welcome changes is a greater focus on character interaction and dialogue, which goes a long way to flesh out the world and your party simply by including more talky-talky.

Crystal Story 2 is, at its core, a combat-focused, light-hearted RPG that may not provided the emotional character development or shocking plot-twists some RPG fans demand, but it still heavy on charm and fun. It's an endearing as it is addictive for fans of dungeon-crawling. The love and effort gone into crafting it is clear, and the result is a frequently funny adventure with expressive artwork and a lot of quirks and surprises. There's also an HD version coming soon to buy, with additional content, cleaner graphics, and offline play, and if you want to thank the developer for two fantastic, hefty free RPGs, you might want to keep your eyes peeled for it. As you might guess, our hero's journey winds up with the fate of the world in the balance, but with an unlikely group of people to back him up, a slime you can doll up in outfits and call into battle, and much more, the threat of the end of the world was rarely so much fun.

Anyone know where is secret quest is?
or the characters special powers are?
(both are mentioned in the achievements.)

Can somebody explain a joke to me?

The joke in question is the binary joke that Guide tells.

It would be much appreciated.

It is a joke for robots only

is there a bug or something? can't seem to load the game after restarting it when I lost to Rita.

The character's specials powers are usable after you upgrade their weapon, at weapon level 2 you get their first specials, at 3 their 2nd, and I'm assuming at 4 their 3rd, though I have not found any rubies or sapphires yet to test that. As for the special quest I currently have no idea, though it may be the doom liar that is unlocked after finishing the story.

Does anyone know how to defeat the final boss?

I can get the Dargon King down to ~10000 hp on his final stage, but I always die straight after that.

I recommend stunning him and keeping him stunned. Poison is useful too if you can get it to apply. Silence is a must as it keeps him form using any magic on your party.

I also recommend using haste/quick all to pull off more attacks and keep him stunned.

As far as i can tell you can only get the secret quest after you beat the final boss:

I order to do it you must get the generic water, stone, and wind or such that are random? drops from creatures in the prison, giant land, and sunken place. After you get these three you can go to the ice town to get the last quest. It will unlock a lake off of merc defense. It has 3 "rooms" with only the boss at the end, no monsters. Killing it will give you the achievement and generic fire. I don't know if the for items do anything after that.

Rubies and Sapphires can be found throughout the game, but a good way to farm rubies (for now, as it a glitch) it to beat lv seven of merc defense. It's repeatable.

Hobla2: this is what the binary joke coverts to:

I'm confused by the Helm equipment item. It says "Increases resistance to Magic attacks" in the description at the bottom, but in the character's stats panel it shows as "Resist Magic [negative %]". All the other equipment items seem to show positive resist numbers - for example the Water Charm says "Resist Water 10%". I'm wondering whether I'm reading the ability correctly? All I know is that I have all my characters equipped with a Helm and they keep getting absolutely KILLED by Korra's water attacks at the end of the Frost Fort.

Actually... on 2nd look, the Shield also shows as "Resist Physical [negative %]" too.

This game's version in kongregate is 1.21 now..
But, here it's only 1.01.
How can we play updated recent version of crystal story 2 here ?

@Jennifer: silence is golden. Use Silence on enemies to prevent them from using magic attacks.

@bluegriffin18, thanks for the tip - but Koras resisted all my nerf attacks and attempts at using silence. I found that casting Spirit Up to raise my party's MDEF helped... it actually seemed to discourage Koras from using her powerful water attack. Finally beat her!

@nelad ...and you don't need that anymore.

Does anyone know how to get each character's special moves for their achievements?
I've been upgrading from I->IV for a weapon and I'm still getting dragon's roar.

Any tips on nixing Rita?

@K, are you "charging" them multiple times? The first time you charge D you get Dragon's Roar, then if you charge him again (i.e. don't use Roar), the next time he's ready it'll be Dragon's Breath... etc.

nelad:
To buy a lot of scrap metals, press "Down" button in the very beginning, not "Up".

I'n stucked in on thing...I have leveled D's sword to level 3 but when I am upgrading it with the scraps metals and it puts lvl 11 (the lvl where you have to use an amethist or something to lvl it up) The item gets blocked.

I mean that when it reaches lvl 3 at the top of when you have to use 7 topaz for example I can't use them because it gots black... like it was blocked, as an object it can be used

I really think I just broke my game...it's not loading, every time I try to move the dragon-boy on the little snowboard he's long gone, it doesn't say 'play' and i'm really sad and depressed right now since this game is really amazing, but I really don't want to move on to another website to play the game...(I also keep on refreshing)

Can someone please help me or i'm just done with this website?

Hi ILifeloser, unfortunately without more information we can't help you. The game loads and plays fine for me on Firefox on my Windows PC. Please make sure your browser and flash player are updated, and also that you aren't using any ad blocking programs, as they interfere with the loading of many games.