Despite what you might think, Picroma's indie exploration-based RPG Cube World is not a Minecraft clone. Currently available in Alpha, the game focuses less (or rather, not at all) on building and more (or rather, entirely!) on roaming the world, discovering and delving dungeons, fighting everything from giant cyclopean warriors to enraged sentient radishes, feeding moles chocolate donuts to make them your pets, and dying a whole bunch because most of the world doesn't like your face. And yes, it is a lot of fun. 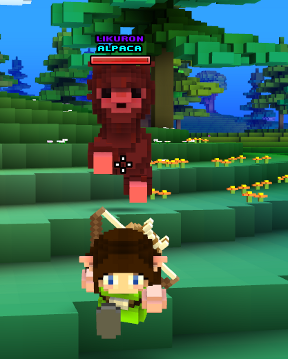 Cube World's controls are actually pretty basic. You move with [WASD] and look around with the mouse, with both right and left mouse buttons triggering your attacks. [E] picks up items, while [R] interacts with people and objects, and you can press [F1] at any time to get a rundown of the basics. After you've created a character, choosing a race and a class, you'll be asked to generate a world by choosing a "seed" (any string of numbers you want) and naming it before being booted out into the land with only the bare essentials. The world you've just created has everything from towns and castles to dungeons and daily missions (represented by crossed swords on the map) so it's up to you to get out there and discover it all. You can even climb things as long as your stamina holds out, go hang-gliding, get a pet platypus, and more. 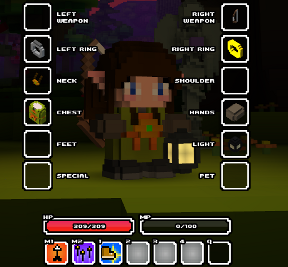 In between dying a whole bunch, that is, since friendly NPCs outside of towns are rare, and robbers, monsters, and just plain nasty wildlife want to render your blocks into bits. As you land successful attacks on monsters, your magic points go up, and once the bar has filled you can hold and then release the right mouse button to unleash a more powerful attack. Initially, your best bet is probably to spend a lot of time slaughtering hapless animals to level up, but as you get stronger, you'll be able to handle the more exotic threats. Threats like giant angry alpacas who interrupt you while you're sucking on pineapple slices. There's no penalty to respawning, so you'll want to make sure you spend time hunting down materials to craft better equipment with. From simple potions to intricate pieces of armor, blueprints for all sorts of helpful items can be found everywhere... provided you have the proper facilities to make it. 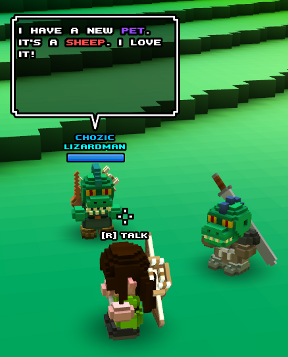 Analysis: Since the whole goal of Cube World at its Alpha stage is basically just exploring while trying not to die, it's best suited for casual expeditions, preferably with friends to tackle the really big baddies. There's no real way for you to make your mark on the world besides, well, killing things, and the game's odd balance means you'll spend a lot of time getting clobbered since it's hard to tell what's more powerful or friendly and what isn't unless you get too close for comfort. You might be able to handle a Cromling, for instance, but a Cromling +3 looks identical and would decimate you in a few hits, and if you're close enough for its name to display, you're close enough to be targeted. You need to do a lot of grinding, essentially, and the experience points don't always make sense... I can kill a mole in ten seconds for seven points, but a vampire only nets me one? At the moment, it's sort of like a less frantic Realm of the Mad God (with voices by Animal Crossing), more focused on simple adventure.

Cube World has a ton of things planned for the future, including player housing, quests, an actual story, and other things that could make it feel a lot more fleshed out. And trust me, it definitely deserves it, for despite the bumps in the road, it's a gorgeous little game. I mean, it sort of has to be since the system requirements are so high, so make sure you try the demo (which isn't really a playable game, just a test for your computer) to make sure you can run it. The care put into designing NPCs and enemies is really remarkable, and everything from the colours of the world to little touches like blocky leaves falling gently from the trees makes you want to just stroll around and admire it all. Despite how slow gaining levels can be, Cube World's mechanics and controls are easy to jump right into and makes it feel like the sort of game you and whoever you like can enjoy, and the random world generation means you're never going to run out of places to explore or things to flee in terror from. Cube World has massive potential that could stand to make it the next great addictive multiplayer RPG, but as it stands in its Alpha stage, it still presents a beautiful, addictive casual approach to adventuring solo or with friends. You'll want to keep coming back to it every time it gets an update, but don't be surprised if you find yourself wandering its wild paths for hours between then, too.

Note: Due to heavy traffic, purchases on Cube World's website are occasionally disabled. If you can't buy the game, just try back later. It's worth it!

What's the price? I can't create an account there right now to look at the purchase page.

It works out to $20.00USD, which includes updates for life and the final product.

$20 for the full game, or do you have to purchase more add-ons. Whether or not the game has add ons = $$$ to become elite really will turn me off instantly.

Any updates on when you can register?

Hi Mongolian. As I stated above, $20.00USD for the full game as well as updates for life. :)Apparently their site came under DDOS attack, which is the reason why it's so hard to grab. My advice is just to keep checking. I was able to register early the morning it was released, while one of the other reviewers was not shortly thereafter.