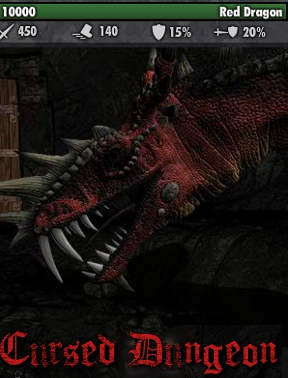 You may know a saying about laying down with dogs and getting up with fleas. Well, adventurers have their own saying: "Get into a fight with a demon, die or become horribly cursed." The hero of a new dungeon crawler from Awoker Games clearly didn't get that memo, and thus he's forced to journey into the Cursed Dungeon in search of a cure. With the entire game easily beatable in an hour or so depending on difficulty level and a streamlined and linear upgrading system, it will scratch your RPG itch without demanding you commit to an entire saga.

Create your character as either a damage soaking knight, fast moving rogue, or strong axeman. Use the mouse to enter battles or go to town, where you can upgrade your equipment using a combination of upgrade stones and gold. Your equipment is upgraded in a simple linear progression, so those of you who feel like you spend half your time in RPGs fiddling in the equipment menu and trying to decide whether the adamantine buckler is better than the angelic shield might enjoy this opportunity to ignore the question completely. In the dungeon itself, you can fight progress battles to move forward in the story (and in the difficulty) or training battles to level up or gain gold and stones. In the battles themselves, similar to Infinite Tower, your character auto-attacks with his regular attack, and you can use the mouse or numeric hotkeys to select special abilities. At the end of each of the four sections, a boss battle will ensue.

The art here is basically static and somewhat retro 3D graphics, and the plot is rather thin, but rather than aesthetics, Cursed Dungeon focuses purely on its battle system, stripping away extraneous distractions like equipment management, and thus succeeds in serving up simple battling fun that RPG fans will find addictive. Others will never understand the relaxation that we who are fans find in the hypnotic trance of battle. Monotonous grinding will definitely get us down, but a certain amount of soothing repetition, spiced up with continually varying enemies, new abilities, and boss fights, is actually fun for us, and Cursed Dungeon delivers that for sure.

I ended up playing the thief and effectively ignoring boosting my attack and mostly ignoring boosting my health in favor of jacking my speed up through the roof. It worked startlingly well; by the end, there was literally only one enemy that ever even hit me; the rest died before they could get a single attack off. Fun game.

Is it just me, or do the devil orcs look kinda like Sontarans? From Doctor Who, I mean.

Is it just me or does this remind anyone of infinite tower RPG? Except slightly better made.