I don't know why people keep saying Om Nom is a little green monster, when he's clearly a little old lady... how else do you explain his fascination with hard candies? Regardless, Cut the Rope 2 has finally arrived on iOS from Zepto Labs, and the newest installment of the beloved smash-hit physics puzzle series brings all the bugs and slimy, sticky tongues you could want!... what? Oh, and it's got all the puzzles, gorgeous graphics, unlockable themes, and quirky weirdness you could want, too. But don't worry. I know what you're really here for. 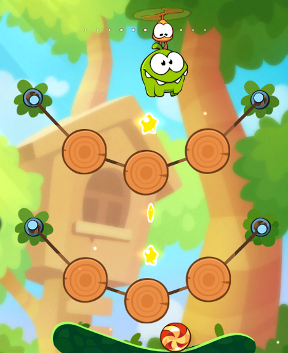 In case you're not familiar with the basic concept... Om Nom wants candy, and you have to get it to him, preferably nabbing all three stars on each level to unlock more stages, and any four leaf clovers to unlock the secret levels. To help unite monster and treat, you'll find all manner of ropes to cut (hence the name), balloons to pop, levers to... uh... lever, and more. This time, you've also got a few friends on your side in the form of the Nommies, little monsters who will help you out in stages by lending their special talents. Lick can make ramps and blockades with his extra long tongue, for instance, while Roto can lift objects (including Om Nom!) and carry them around the level on a predetermined flight path. Getting Om Nom his sweet treat is usually easy enough, but collecting all the stars and clovers on each level is another matter entirely. If you're really, really stuck, you can purchase anything from additional balloons to solutions and more via microtransactions, but successfully solving a stage on your own is vastly more rewarding.

Strangely, Cut the Rope 2 doesn't necessarily feel all that different from its predecessors. The Nommies don't shake up the gameplay that much since they're basically just additional level elements rather than something that significantly changes how anything works. I wish we could have chosen exactly where to have Lick's tongue stick, for instance, since that feels like it would have added a layer of challenge and planning to things. Its biggest problem might be that it feels very slow to add in any of those new elements, and then only in pieces at a time, so there's a distinct feeling of deja vu for a good long while. Fortunately, the game is every bit as gorgeous and polished as we've come to expect, and definitive proof that physics puzzles can still be smart and fun. Each of Cut the Rope 2's whopping 120 levels (with more to come!) are carefully designed, so while you can muddle your way through them by frantically tapping and slicing and crossing your fingers, figuring out the solution to make everything drop neatly into place is as satisfying as ever.

Cut the Rope 2's graphical changes aren't immediately or massively noticeable, mainly because the series has always been squeaky clean and gorgeously colourful to behold, and diehard fans might mostly notice some mildly different animations. Surprisingly, it ran like buttah on my ancient first generation iPad! Though it doesn't drastically shake things up, Cut the Rope 2 is still one of the finest physics puzzles around, with enough cleverly crafted stages, new elements, and unlockable visual themes to keep you happy for a good long while.

When I heard this game was being made, I was both excited and at the same time a little afraid that it might to turn out to be a repeat of Plants vs. Zombies 2: It's About Money.

Thankfully, my fears were unfounded. Microtransactions remain a small element in the gameplay that we've come to know and love from the series.