If you're in the mood for some old-school arcade fun, here's Cyber Chaser, a new trigger-happy shooter from Silen Games. Today well be fighting colourful cyborgs while collecting power-ups and coins and in general being total badasses. Our hero will run and shoot on his own, so all you have to do is use the mouse or the [arrow] keys to duck or jump. Sounds easy, doesn't it? 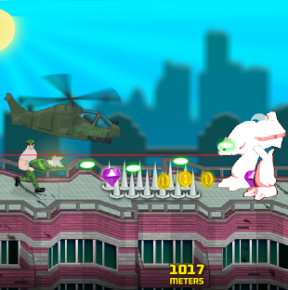 There are three main stages, each ending with a boss. The catch is that the stages are quite long, so don't expect to finish them in one go (or two, or three). You will have to be patient, young padawan, and make use of the very versatile upgrades system. The money you collect can be spent to upgrade your abilities, weapons or support (power-up drops). On top of this, you can collect fuel cans and gems, which you can exchange for bonuses before each stage. Then there are keys which unlock boxes for a random bonus. Finally, as you level up, you will unlock individual challenges which reward you with upgrades. Levels are gained through in-stage quests, and they vary from killing a certain number of enemies to collecting gems and breaking down doors.

Cyber Chaser is a fast-paced, colourful whirlwind of a game. The cyborgs will drop shiny goodies like overstuffed pinatas, sometimes making it a bit hard to see what you're doing, but in most cases this doesn't disrupt the gameplay. However, even with such bountiful drops, upgrades don't come easily. If you need more money, you can always revisit a stage and farm for it, though this does get repetitive after a while. Levelling up is mostly seamless and the quests are never too difficult; actually, you'll probably finish a lot of them without even trying, though some will require some effort. It seems the game manages to find a comfortable balance between challenges and rewards, which is why it's a pity there are only three stages. Such an addictive, cheerful-looking shooter could certainly have used a few more.

Fun game! One minor problem - although the game saves automatically, if you leave and come back then you lose your upgrade progress on items that were only upgraded partway. Fully upgraded items remain fully upgraded, fortunately.

Are you sure? Because partly-upgraded items display as if not upgraded when you don't have enough coins to purchase the next level.

This game made me lose track of time, I'm here for about 2 hours playing this! I'm on level 35.

I like the survival mode but now (and I'm still have plenty to upgrade) I'm pretty much flying through it, I can't see anything. My survival technique is to remain on the upper side of the screen and get down to grab health when it appears.

This had a weird difficulty curve for me. The first level took me dozens of tries to do, and then the second stage took me two tries, and I did the last stage in one try. And that was going from the start to the finish.

@Bill I expect you're right, that's what I was seeing. :)