[Note: Please be aware that this game contains graphic scenes and material that may be upsetting to some players.]

They say the people who graduate from prestigious Hope's Peak Academy are guaranteed success in life, but since they only accept the best of the best, most will never find out. Makoto Naegi thinks he's lucked out when he wins a lottery to become one of the students, but neither he nor the other fourteen exceptional (and eclectic) teens who step inside the doors are prepared for what happens next. They've been trapped inside by the school's... unusual administration, and told they're to live out the rest of their days behind its walls. The only way out? To kill one of the other students and not get caught. Originally released for handhelds and now available on Steam, Danganronpa: Trigger Happy Havoc is a surreal murder mystery visual novel adventure from Spike Chunsoft and Abstraction Games with its own distinct style, a wild cast, and one seriously strange plot, though a lot of tiresome and potentially upsetting tropes and stereotypes may taint the experience for some. 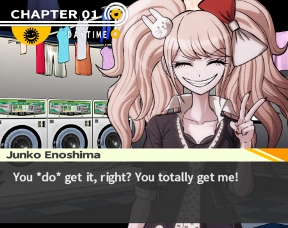 At the start of the game, you'll be asked to customise your difficulty, making the logic puzzles related to certain situations harder or easier, as well as other gameplay segments. Most of the gameplay in Danganronpa is fairly typical. It's very text-heavy, with a focus on talking to the other students, so most of your time is spent clicking through dialogue. When the game displays purple-pink text, you can right-click to choose to react to it and press that particular point. Outside of conversation, you'll use the [WASD] keys to explore the school and click to interact with various people and things. Each day brings different specific events, but during free time, you can roam about and get to know your fellow students. Choosing to spend time with them can deepen your relationship, and giving them the right gift, purchased using coins you can find at the school's store, can make them like you even more. 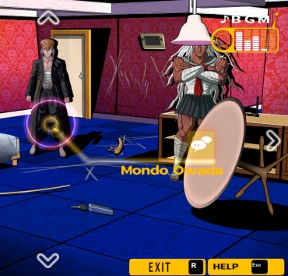 Of course, it's not all traipsing about making buddies and trying to get senpai to notice you. Before long, tensions begin to rise, and someone shows up dead. However, that doesn't mean the killer gets to waltz out the door. Once someone has been killed, shortly afterwards a trial will be held. The students will try to figure out who the killer is, and popular vote will pick their choice. If they're right, the killer is punished. If they're wrong, well, the killer gets off free, and the rest of the students are the ones who receive punishment... execution. To avoid death, you'll need to investigate the school to find all the clues, or "Truth Bullets" as they're called, before the trial begins. Get nervous? Don't worry, most of the time you can save and load your game wherever you like, so take advantage of the game's multiple save slots! 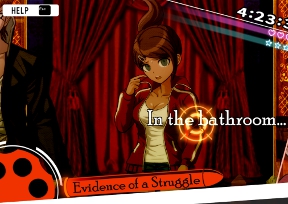 These trials aren't like Phoenix Wright. They're fast and under time limits, consisting of multiple different segments where you'll need to think quickly to literally blow holes in false or contradictory statements, assemble the proper responses, or present the right evidence. The game evolves a little as you go, adding in new mechanics with each trial to make things trickier, and all of it blends action with logical thought under a timer, albeit one that resets with each new portion of the trial. (No, don't worry, you don't have five minutes total to figure out the killer.) While the timer is an issue, Makoto's influence bar is important too, since if that runs out, it's game over, though fortunately the game will often simply ask if you want to retry rather than forcing you to sit through the dialogue and cutscenes again. You may have noticed while spending time with your classmates that you've been gaining skill points. These can be used to allocate the special skills you unlock from their friendships before a trial, which can give you an edge at certain points. 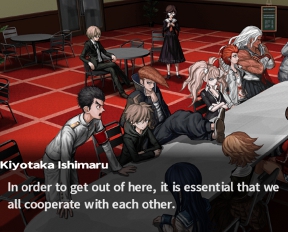 When you're sleuthing around, coming up with clues, and even chatting with your fellow prisoners, the game feels vibrant and alive... it's just a shame the map wasn't more interesting (or even interesting at all) to look at or wander around during the Free Time segments. Setting the logic on "Mean" difficulty at the beginning makes this more challenging, but also a lot more fun, since it requires paying attention to everything that everyone says and really connecting all the dots on your own. Danganronpa's strongest and weakest gameplay element is the class trial. The brisk pace makes spotting and shooting down inconsistencies as you think on your feet thrilling, as does assembling your closing arguments to get a grisly play-by-play of what happened. The game does a good job of gradually ramping up the challenging by introducing more and more elements, forcing you to think on your feet and really pay attention to (as well as memorize) facts. However, the Bullet Time Battles that make up the finale of each trial as you try to blast apart the guilty party's denials are just pointlessly gimmicky and clunky. 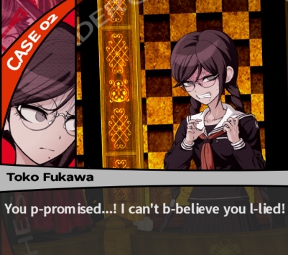 Danganronpa's portrayal of a bunch of kids trapped in a school and forced to kill one another may be a little over the top, but the game does a pretty darn good job at showing that gradual slide into mayhem. At first, the idea of killing anyone seems ridiculous, and even after Monokuma's "motivation" and the first killing, the kids are more shocked and disgusted than anything else. But as time goes on, desperation begins to set in, and people begin to turn on one another. You want to find out how everyone got trapped and why, sure, but seeing the way different characters react to everything and begin to crack or change under the pressure is what makes it so compelling. Makoto himself is a fairly bland protagonist, and it doesn't help that the game forces him to be a bit of an idiot. He spends so much time getting manipulated by other characters that it becomes frustrating, and spotting a glaring clue or making a connection he won't pick up on until the narrative wants him to is even worse. 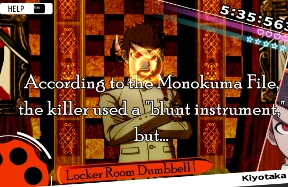 The rest of the cast fares a lot better, from a self-loathing yet wildly popular romance author and literary dynamo, to the borderline sociopathic heir to a family fortune. The downside is both some fairly one-dimensional traits to be used as plot devices, and a tendency towards some cheap tropes... the chubby pervy guy, the "crazy and dangerous" mental illness, the "mannish" girl, and, well, the "big reveal" regarding one of the characters in chapter two. That last point comes with a whole lot of gasps, shock, and some particularly tasteless comments that strike a lot of sour notes. It's hard to say why without specifically spoiling a plot point, except to say that it being used as a big twist at all is disappointing, much less the reasons given for it, which are kind of insulting. Even if you don't personally find any of it offensive, these comparatively shallow character traits used as plot devices means Danganronpa's narrative isn't as finely crafted or smart as it could be. Despite that, the way the story pulls some seriously wild twists makes even its more convoluted plot elements later on an intriguing ride from start to finish. 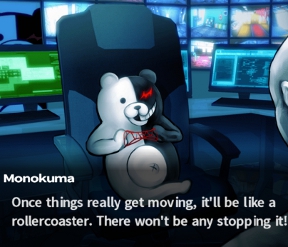 Danganronpa is actually a game people have been telling me for years I'd like, and contrary to the nitpicking you've seen up to this point, I did enjoy it. You could consider this a recommendation with a lot of caveats that may or may not mean as much to you as they will to someone else. Danganronpa is still one of the most uniquely weird and creative games you'll find. The voice acting is largely pretty great across the board, as is the soundtrack, and Danganronpa's surreal, neon-drenched style, trippy camera angles, and exaggerated artwork make it memorable, and not just because between them all the cast has enough hair to weigh more than a mid-size SUV. (Or because an otherwise sad and serious scene needs a panty crotch shot, apparently.) Once you've completed the game, you'll unlock the bonus School Mode, which is a lot different from the main game and comes with more opportunities to hang out with the characters for other objectives. While some may find Danganronpa: Trigger Happy Havoc too over-the-top, its radically unique style and own personal twist on some familiar concepts make it stand out in a big way. It's a big, meaty game whose quirks, over-the-top characters and plot, and singularly bizarre style make for one singularly outlandish spectacle. Taken as a whole, there's not much else like it out there.

Regarding the warning at the start of the review, it goes without saying that Danganronpa contains a lot of gore and graphic violence, though blood is typically shaded pink, and there's also a lot of profanity and innuendo. However, the following contains major spoilers for chapter two of the game, and details specifically the issues some people may take with the content. This information is provided for people who have specific concerns to make appropriate decisions about what they may play.

It's ultimately revealed that Chihiro was, in fact, a boy and not a girl. Chihiro is not treated as trans, but rather decided to pretend to be a girl because he was picked on so much for being weak, with the ultimate goal of one day becoming strong enough to not need the lie. The reactions of other characters towards this news is varied... they're not really disgusted, but there's a lot of shock and tasteless exclamations, as well as the immediate change in pronouns, and some people may find this particularly upsetting.

Additionally, one of the characters is revealed to have dissociative identity disorder. This is referred to as being "schizo" at one point, and they are characterized as being extremely inappropriate, violent, dangerous, and unpredictable in a negative way, in addition to the typical "crazy" behaviour. This reaction of the rest of the cast to this reveal, as well as the character themselves, while in keeping with the game's over the top tone, may be upsetting for people who are already displeased with the typical depiction of mental illness or any other non-neurotypical state in the media.

I was so happy to see this is on Steam. I was not expecting it at all.

I played this back on the PSP about a year ago. It was definitely worth the one playthrough at least - especially if you like visual novels - but I cannot speak for this port of it.