The tales most people know are only partly true, fragments of the actual stories behind the myths. As the Fairy Tale Detective, your mission is not only to get to the bottom of the facts, but to save the world while you're at it. This time around, the mythical kingdom in the sky is breaking apart causing meteor-like pieces hurling toward earth and you must join with a grown-up boy on the beanstalk, yes that Jack, to rescue it in Blue Tea Games' gorgeous, action-packed hidden object adventure—Dark Parables: Jack and the Sky Kingdom. 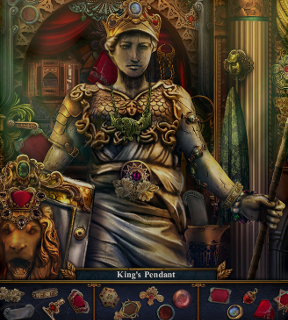 Like the others in the Dark Parables series, the story elements are strong, blending familiar plots and characters into an original, darker fairy tale. Here, Jack is like Indiana Jones but don't start thinking he'll being doing the heavy lifting in this adventure. It's all up to you to take on foe and friend alike, exploring lush environments for the objects and pieces needed to unlock new areas or fix broken ornaments. That's where most the enjoyment lies as the heart of the gameplay is finding and using items. How easy or difficult this turns out to be can be customized through three difficulty settings; at all levels, you can choose to turn on and off sparkles at any time. Even so, the challenge is somewhat inconsistent. Most of the task-based and item-use puzzles are beautiful but simple to complete, hidden objects are usually (although not always) easy to spot, while the minigames tend to be less frequent yet more involved. It is the hidden object search scenes that sets this series apart from others in the genre, though. Instead of a jumble of random objects, in Jack and the Sky Kingdom, as in all the Dark Parables games, elaborate and interesting artwork helps camouflage fragments of items. Once you find all the parts, they come together to create a single object that can be used somewhere else in the game, a bit like a magical crafting system. 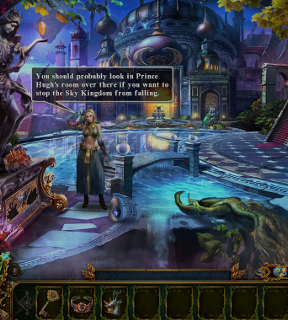 Along with the main objectives, which are kept updated in the task menu and highlighted on the map, there are a number of side quests: collect twenty cursed objects just for the fun of it and also find the various parts to a parable to open the story in your journal. The map itself isn't much use, though, as it doesn't show areas with incomplete puzzles nor can it be used to jump to a new scene. Still, while there is a wide variety of locations and areas to discover, backtracking is kept to a minimum so the lively pace of the story is never dragged down. Just as you think the story is winding down, a new twist sends it on and things really get mesmerizing once you reach the Sky Kingdom. The fantasy-themed aesthetics are truly beautiful as well: there is no shortage of eye candy anywhere you look. It's easy to sigh the lack of higher definition graphics yet Blue Tea Games' design and artwork remains superbly high quality throughout and many of the details are near photo-realistic. An amazing amount of depth in the artwork and animations, along with a well written story and talented voice acting make playing Jack and the Sky Kingdom worthwhile and entertaining. It's sure to be a favorite among fans as well as those new to the series.

Currently only the Collector's Edition of this game is available. It contains bonus content not found in the standard edition: a bonus game, built-in strategy guide, wallpapers and more. Remember that Big Fish Game Club Members pay only $13.99 for Collector's Editions (or 2 club credits), and collector's editions count 3 card punches of 6 total needed for a free game.