Dark Parables: The Little Mermaid and the Purple Tide

Eipix Entertainment takes the reins for Dark Parables: The Little Mermaid and the Purple Tide, the latest installment in Blue Tea Games' popular hidden-object adventure series, where you find yourself in Greece attempting to find the source of and stop a strange phenomenon flooding villages and killing off all the sea life. Turns out all of this is tied to the mysterious temple that's risen out of the sea, and a war fought long ago between two kingdoms, one of which had the brilliant idea to summon the Sea Goddess who promptly sank and cursed the kingdom to end the fighting in what might be the most epic fit of "I'll give you something to cry over" ever. Now the king, transformed into a hideous creature and sort of bitter about non-monstrous "Landwalkers" like yourself, is trying to use her power once more against the whole world, and it's up to you to stop him. You'll travel across one seriously big map, do battle with a persistent (and giant) poisonous eel, solve perplexing puzzles and fragmented hidden-object scenes, and fight the urge to make more fish based puns than anyone has any right to. 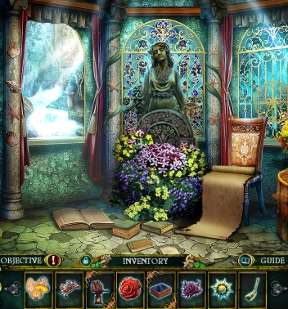 If you like unlockables and item achievements, The Little Mermaid and the Purple Tide has you covered, with little extra objects to pick up that unlock parables and more. It's a beautiful game, with its ornate environments and lush colours, but it's also almost too busy visually at times, making it hard to pick out items from the surroundings. This is definitely the sort of title for people who love to be dazzled with sparkles, flares, and vibrant, intricate doo-dads, but it might be a bit hard on the eyes for people who aren't used to games looking like a pair of magical tchotchke and craft stores exploded on them. Those keys look like you'd hurt yourself using them, man! The latter half of the game is a bit of a slog, mostly because it starts dumping piles of items into your inventory, repeating puzzles, and then sending you back and forth across a frankly massive map. If you feel like you need to go to a lot of different locations for a game to reel you in, you'll definitely get your money's worth here. There's a lot of ground to cover as you explore, with a lot of dazzling sights, and while the telling is a little scatterbrained, the story itself is actually pretty interesting and a unique spin on the classic fairytale that even combines elements from the other games as well. 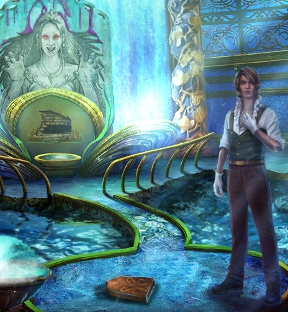 While there are definitely things to nitpick, however, Dark Parables: The Little Mermaid and the Purple Tide is still a rock solid and extremely ambitious fantasy romp. There are a lot of brilliant executed cutscenes and action sequences, and the gameplay balances classic point-and-click adventure puzzles with traditional hidden-object elements nicely. Since it's an Eipix game, you know there's going to be both eye and ear candy on display, and they come through in spades, delivering a game that dazzles from every aspect. While its story could have been better served by limiting itself to the source material at hand rather than trying to pull in other elements from the rest of the series that just confuse people who haven't played them, it's told in a sweeping, cinematic style and even sprinkles in a few well executed jump scares to really make you feel part of the action. Dark Parables: The Little Mermaid and the Purple Tide is fantastical fantasy with a few rough edges, but more than enough punch behind its content and flair to make you appreciate every hour you spend with it.

Got the game from BigFishGames and then, about halfway through, I encountered a glitch that prevented me from progressing. From other comments on the BigFish forums, it seems that glitches like this are not uncommon for Mac users, especially if you're using Yosemite. Be sure to test the game out with an hour trial before you buy to make sure everything works. Also, if you do have a glitch happen, send in an error report to BigFish. So far, I still can't finish the game, but I got a code to get a free game instead, so I'm fine waiting until Eipix makes a patch or something.
Outside of that, the game is okay. Compared to the other Dark Parables games, the puzzles are repetitive and locations and items seem to be lacking a certain spark. While I can't fault Eipix for it's cinematics and for their efforts to keep Blue Teas's style, I honestly think that, if you've played the other games in the series, there's definitely something...different about this installment. Whether that's a good thing or a bad thing is up to you.

Unlike all of the other Dark Parable games, this one actually has a fast travel feature. The game never actually tells you about this feature, but if you click on the spot you want to visit on the map, it'll teleport you there (sorry for stating what is probably already obvious). I was really happy about that, because it helps abate a whole lot of potential tediousness and time consumption caused by manual back-and-forth'ing.