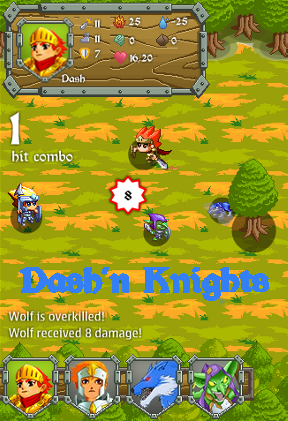 When people tell you that you have to tackle your problems head on, they're not usually being literal, and it's probably not said with the assumption that your problems are actual bloodthirsty monsters. Tempa Labs shows us that sometimes it's okay to try to go through obstacles rather than around them in their unique turn-based RPG strategy game Dashn' Knights. Control a troop of tiny bouncy, ballistic heroes out to save their kingdom from Ye Olde Monstere Invasione the only way they know how... by running into them really, really, really fast and sending them ricocheting around the screen.

The concept is simple; instead of just clicking on an enemy to attack, when it's your hero's turn, you choose a direction to move and he or she will dash that way. If there's an enemy in front of you, the push meter will pop up, and the higher it is when you hit the button, the farther back your foe will fly after you attack them. Manage to perfectly nail a push force hit and you'll get another strike, allowing you to chain up big combos. You can make use of objects on the battlefield to bounce into enemies, or even send them flying into each other for more damage. Between battles, you can spend any level skill points you've earned, as well as purchase upgrades and new heroes. You can even replay levels on higher difficulty settings to earn more rewards.

If there ever was a game that felt like it was designed to shoot Cupid's arrow straight into the heart of your Super Nintendo-ensconced childhood, Dash'n Knights is it. The bright colours and character sprites are just about perfect, especially combined with the energetic, if somewhat repetitive, soundtrack. The issues with it mainly stem from its repetitiveness, and lack of real variety in its upgrades and heroes. Having the game automatically spend points when you click on something can also be frustrating if you do it accidentally. However, that said, Dash'n Knights is still a gorgeous, creative little game that's easy to have a lot of fun with. Chaining big combos through strategic placement is very satisfying, and the gorgeous design coupled with the simple concept means it's the sort of game that's very easy to pick up and play over and over. Dash'n Knights is a great concept that would be ever better fleshed out a bit more, but as it stands, you'll find no better way to briefly satisfy your need for smashing into things with murderous force.

It's good fun, but now I am stuck facing a very difficult final level that I can't beat without lots of grinding to upgrade my characters. Part of the reason I'm stuck now is that I breezed through the intermediate levels with my chain combo skills. The game is worth a look for the unusual gameplay mechanics alone, though.

"When someone tries to block, show them you rock."
New Fluttershy approves.