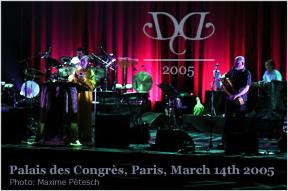 While I am conscious of the fact that this blog has become primarily focused on games, it is still my only outlet for publishing noteworthy items of interest. That is why, when scanning the archives, you will find a few entries on a variety of topics that have little to do with games. Add one more to that group.

Late yesterday I became aware that my favorite musical artists of all-time have regrouped and are currently touring the world again after nearly a decade of being apart. And while this is truly news to shout from the rooftops, it is also not surprising to anyone who is familiar with the group's history and behavior.

Brendan Perry and Lisa Gerrard are Dead Can Dance, though they tour with several other musicians to recreate their music as it is composed of many instruments from as many different lands and cultures. Throughout their accomplished musical careers, Perry and Gerrard have collaborated together to write and record, without a doubt, the most awe-inspiring ethereal music I have ever experienced. Music that is sometimes calming, sometimes moving, and yet is always emotional and soulful.

And just as it seemed they had perfected their art and were at the pinnacle of their popularity, the two would go their separate ways to follow their own passions and to become musically influenced in very different ways. Time and time again, Perry and Gerrard would regroup to combine their talents and unique experiences, and from which a new musical direction, and sound, would emerge. No two albums from the artists have ever been the same, and yet it is difficult to mistake their music for anything else.

Both Perry and Gerrard have voices that resonate within the very inner parts of my body and soul. The exceptional timbre of their voices are perfectly complemented by the richness of their lyrics. When blended together with the animation of their instruments, the resulting experience is unforgettable. They are incomparable musicians and among the most important of my lifetime.

So you can imagine my delight when I learned that they will be appearing in New York City on October 8, 2005 at Radio City Music Hall, and that pre-sale tickets were made available today. As you might have already guessed, I secured four (4) second-row seats to the concert immediately when they went on-sale this morning.

It will be an experience you will not soon forget.

I had the good fortune of seeing Brendan Perry in 1999 or 2000 (can't remember now) at Park West in Chicago...out of the dozens of shows I've seen in my life, I had never had such an experience. Unbelievable...just, transcedent. Dead Can Dance has also been my favorite for over 10 years now, and I can't believe I'll finally have a chance to see them live!! I'm just now finding out about this...so some of the *really* good tickets are gone, but there are still some left at certain venues. For anyone with even the remotest interest in Dead Can Dance and their music, and having access to the show venues, please don't hesitate to get tickets now!

Anyway, Jay, I'd been meaning to post kudos regarding your blog for some time. I'm fascinated to have found a student of gaming who also celebrates truly great music. I hope you enjoy the show. :)

ps. Just a bit of nostalgia--one of my old zine reviews. (Go easy on me, I was just a young pup.)

Thank you, Lee. I'm glad my off-topic post was not for naught. =)

From the title, the first thing that came to mind was a game involving dancing skeletons or zombies, but then I began to wonder if it was actually about a long lost dancing can, which would almost be more interesting.

Much to my surprise, it was neither, but I am sure someone will make one or both of those games later...

I'm intruiged - What album would be a good starting point?

Spiffae - It's difficult to pick just one, but I'd have to say that Into The Labyrinth is a favorite of mine. Here are my recommendations:

Jay, thank you so much for that post. I sent the link to a friend of mine. I do not think I have ever seen anyone that excited before. He got his tickets and is extremely appreciative. Well, now back to the games. Thanks.

You scored big time Jay!! Dang! 2nd row? How on earth did you do that? You're freakin' me out! heeeee!

They're playing here at the Hollywood Bowl too.

Robert - if you come to NYC to see the concert with me, I'll come out there to see the one at the Bowl with you. =)

dang! i got to see dcd perform in sf at the palace of fine arts ages and ages ago. it must have been about 14-15 years ago! (sheesh, now i feel really old.) i remember being just blown away by them. earlier that same month i went to see the cocteau twins in berkeley. the dcd show was so much better.

no way? DCD touring!? This is AWESOME...

thanks for the info, I had not heard yet that this tour was happening.
course now that I have seen the dates, I am all pissed off that they are not coming anywhere near me and I seem to have pissed off a few people at teh forum on the lisagerrard site off because I dared to bitch about it...

someone, anyone that goes, enjoy it for me.
thanks