What is the most romantic, and at the same time, most tragic story in Western literature? No doubt about it, the answer is the story of Romeo and Juliet which, since it was first staged in the 16th century, has spawned countless adaptations in theaters, movies, television, ballet, operas, and now casual games. Despite the ominous sounding title, Death Pages: Ghost Library, the latest adventure hybrid from Elephant Games, is less about ghosts and death and more about living vicariously through one of William Shakespeare's most well known works. 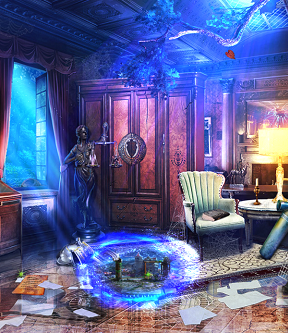 All the world's a stage, according to old Will, and all of us merely players. That is especially true for three teens who went to the library to study and ended up being captured by a psycho and his hand puppet (a duo so thoroughly deranged that they make Mr. Garrison and his sidekick Mr. Hat seem like paragons of normality in comparison) and forced to live through the romantic yet fatally tragic tale. Fortunately you, in the form of a librarian, come along to save the day, or at least try to while solving your way through a mysterious library and the living worlds of the story inside the quartos of the original play.

Point-and-click your way between the two worlds of the library and old Verona (the setting of the play), using the handy changing cursor and the various sparkles to light the way. A refillable hint feature gives hints in the hidden object scenes and the adventure scenes, and then becomes a skip feature during the puzzles. Death Pages: Ghost Library also features a delightful twist on the standard hidden object tropes, reverse hidden object scenes, where you place items back into the scenery rather than dig things out, a twist that featured prominently in the Enlightenus series of games. The mini-games are mostly variations on common adventure staples, and the adventuring features a nice mix puzzle solving and found object use. 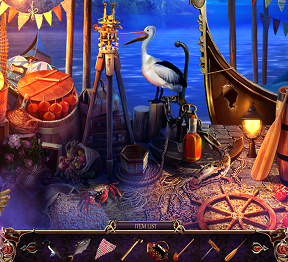 A bottom loading inventory holds many of the items you find along the way although you actually can't pick up everything that is not nailed down as the game reminds you that you only have so much room in your pockets. Instead of the standard "notebook that keeps track of the story" you are supplied with a notebook that keeps track of your goals both immediate and long term. The map feature is a marvel, a two layer section that shows both the library (in flat, blue-print form) and the world of Verona (in a charming 3D scrolling model) and highlights where you've been, places you've not seen, and goals that still need to be performed. Can you save the teenagers before they live out the tragedy? Or will the mysterious manipulator have his way? The answers lay not in the stars, but in our selves, to steal a nice turn of phrase.

Analysis: Death Pages: Ghost Library at first glance seems like the standard adventure hybrid that is so prevalent these days. Don't let the title fool you, however, as there really aren't any ghosts, although the threat of death is real enough. Instead, the story weaves between the "real" world and the world of the old bard, more fantasy than horror. Elephant Games has created not a ghost story but a lovely fantasy with a twist. Have you ever dreamed of living inside your favorite story? Welcome to the nightmare reality. 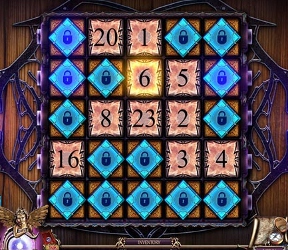 Intensifying the fantasy feel are the hyper-saturated backgrounds and dramatic music which swells in the appropriate places. Smooth animations and semi-competent voice acting (albeit in bad British accents) round out the experience. The story is engaging, the reverse hidden object scenes enchanting, and the increasingly difficult mini-games and puzzles delightful as you rush to rescue the poor hapless kids from the over-the-top (even for teenagers) angst of the tale. The best feature is that fantastic map, which not only shows every place where something still needs to be done, but allows the player to jump from one scene to the next, and one world to the next, eliminating a lot of back-and-forthing, especially late in the game.

If there is a downside to Death Pages: Ghost Library, it is that not enough time is spent in the world of Verona. The story tends to lose focus a bit, and strange things happen like Hamlet popping up out of nowhere demanding the skull of his friend Yorick. What is Hamlet doing running around in the story of Romeo and Juliet? And why does he launch into the "To be or not to be" soliloquy instead of the more appropriate "Alas, poor Yorick" speech? Who knows, and it tends to detract from the main quest and bogs down the action a little towards the end. Not a fatal flaw, but a flaw none-the-less.

Despite the lack of focus, Elephant Games (makers of the Grim Tales and Mystery Trackers series) has once again delivered a fantastically entertaining adventure hybrid that is sure to enchant and delight as you explore the gorgeous scenery and the timeless depth of Shakespeare's most famous tale of tragedy and woe. With three modes of play for everyone from noob to pro, Death Pages: Ghost Library has something for everyone. Bring along your problem solving skills (and maybe some popcorn) and give Romeo and Juliet a happier ending!