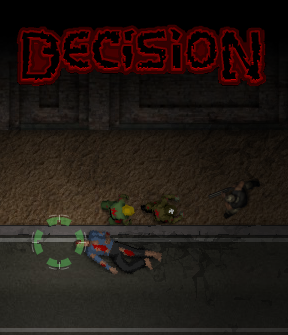 The city was overrun by them days ago. Thousands are dead, and even more, well... "aren't alive". No one knows the cause of this catastrophe, but we are the ones tasked with finding a solution. It is clear that our technology is the only way that we'll reclaim our lives: our military outposts, our generators, our factories. However, if we're ever going to get even close, we'll need to rely on something far simpler: a weapon and someone crazy enough to use it. Decision is a polished zombie action-shooter-defense hybrid from Fly Anvil, and whether you have a shotgun, a flamethrower, or a rocket launcher by your side, you're sure to have a bloody good time.

Decision offers two control schemes, one the standard [WASD] keys to move and mouse to shoot, the other entirely mouse-based, where your avatar will follow the crosshairs of the aiming cursor. In general, you must complete various missions to take the city back from the zombies, whether in the form of exploring new areas, locating and defending important outposts and machinery, putting down uprisings, or protecting others while they complete upgrades. As new areas are unlocked, there'll be increased opportunities for earning money to purchase upgrades. However, make sure that you maintain a level of security in each area. If the zombie population rises too high in a locale, you'll be facing a tough battle to take it back.

Analysis: It's been interesting to see how zombie-based flash games have followed a similar trajectory to zombie movies, albeit in a much more condensed span of time. First there were the works where zombies were portrayed as a pure horrific menace, the shambling undead horror of our nightmares. It is hard to maintain that horror as a concept becomes ever more familiar, and so zombies became fodder for the action genre; the kind of creature any hero can bloodily mow down without a hint of remorse. Following this comes parody and deconstruction, where the undead are mined for comedy, while more serious attempts at featuring the creatures focus on the realistic logistics of what experiencing an apocalypse would be like, and how humanity might fail to stack up. The culmination is in reconstruction, where developers mine the ideas of the previous eras in order to revitalize the concept through new combinations. 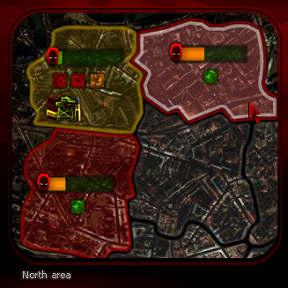 Decision is one such attempt at a reconstruction: You'll be mincing legions of the undead with shotgun bullets, but still be startled when the terrible noise of a huge boss stalks its way from the darkness. The narration is so over-the-top that one would suspect self-parody, but at the same time, much of the game is focused on the minutiae of how one would try to maintain order in a metropolis facing such a crisis. Some aspects work better than others, but it is an cool mixture none-the-less. Likewise, Decision's gameplay shows a wide range of influences. Zombie flash games tend toward the survival horror, action, arena shooter, and strategic defense genres, and there's each of that to be found here. Whether you're blasting zombies from the safety of your chair-mounted chain-gun, or attempting to protect a generator from a pack of undead dogs with nothing but a shotgun and your wits, Decision borrows from the best.

Some nagging flaws mar the experience. First of all, the game is quite dark. No, not in the "Maybe... we are the real monsters!" sense, but in the "Man, there sure isn't a whole lot of light" one. Be prepared to turn up the contrast. Likewise, it's a good thing that keyboard/mouse controls were put in, since the "recommended" mouse-only set-up, while a valiant effort at making a one-input arena shooter, doesn't quite make the grade. Standard control set-ups are standard for a reason, guys. Finally, there's are missed opportunities for greater depth in both the story and mechanics. The economic portions of the game are serviceable, but shallow, some of the mission types are more repetitive than others, and, in general, when you call your game "Decision", you'd think that there would be more of a branching plotline than the linearity there is.

Zombies are no longer the meme-tastic villain du jour that they once were. Still, the idea that something familiar and alive has turned into something dead, inhuman, and still moving will always hit a nerve in our psyche. Games like Decision show that creative developers will always find interesting ways to approach a subject, and that zombie games, like their inspiration, are really hard to kill.

Hmmm... the game isn't working for me. After I click "Play", I see the guy shoot the zombie, and then it fades to black. Nothing shows up after that. The mouse is visible, and I can hear some things if I move it around and click, but I can't tell if anything is happening.

I haven't played Decision yet, but I thought I should just mention that while there's been a recent spate of zombie games, we ought not to forget some of the most famous classics of zombie games, Half Life and Resident Evil. If it hadn't been for those, I wonder if there would be any zombie Flash games nowadays. But I've definitely noticed that in the past couple years there have been tons of Flash zombie games. At this point I'm hoping to someday see a new one that takes the best elements of these games and expands on them. From what I've personally played I think that Rebuild, The Last Stand and Shattered Colony: The Survivors are the best of them (I played Sonny but I'm not much of a fan). In particular I'd love to see the strategy elements much improved.

Now to see where Decision stands.

They really got the mood right in this zombie game, I like it. Just beat it yesterday; it was a satisfying experience and I'm looking forward to playing the sequel (which I heard is already in the works).

It's not without bugs though. In Firefox, restarting a level immediately after death kills the sound for the rest of the game. To get around this, one needs to choose to go back to the map instead of restarting the level straight away. When the level is loaded from the main map, everything is fine.

If anyone'd like to see the final level and bossfight, I've made a video here:

I played for two evenings in a row: 85% progress and no more places to go. Now what?

I cleared all areas (six in total), I've got all the weapons and upgrades, achievements 13 out of 24 (but I checked if an achievement is adding something to the progress, but that didn't count), upgraded all towers and factories (brings me 15.000 coins a day, already have 133.180 coins (nothing more to buy), so all good I'd say.

On the map two more area seem visible, but nothing happens, nothing even when all the other areas are checked the green 'tick'.

Okay, missed an assault position. Apparantly you have to do at least one time this level...

This is an entertaining game but the grammar and making sense in general of a lot of the text leaves so much to be desired. Some might argue it's not important in a game, but I bet it's not just me who finds it grating.

Zombie games are right up my alley. I am a big fan of The Last Stand series.

This game is pretty fun until the end.. they couldve made the boss fight way more intense and atleast show some credits or ultimate prize after defeating him. Instead they bring you back to the map page. I didn't know it was the end untill only after I watched Decision youtubevids to see that region 7 was actually the last region. It was so unclear and moreover unfulfilling.

Ow wait I take that back I see that you can completely cure the regions! I havn't done that yet.. lets see if theres credits shown afterwards or something :D

Alright finally finished the game completely. And I was pleasantly surprised by the ending. Not a lot of thoughts about what he said though. So taking all into consideration.. I had a fun time. Couple downsides were that the game was too intense and lacks resting moments. Therefore killing zombies becomes numbing and less enjoyable. A little too much action for my taste.

can any one tell me watt thay thank the best tower setup is cus i vana test it and see watt is realy tha best and then i will tell you watt i thank is the best and then you can give me your openion please and sorry for bad spelling im iclandik and not realy good at englis speling so sorry :)