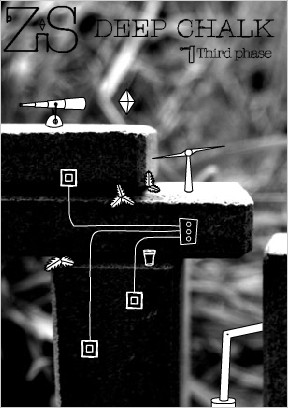 First things first: if you have headphones, plug them in. If you have a good speaker system attached to your computer, turn it on. Along with Auditorium, the first two Deep Chalk phases, and a very small number of other Flash games, Deep Chalk: Third Phase takes as much care with the sound as it does with the visuals. If you rely on your laptop speakers, you'll miss out on all the subtle whistles and buzzes in the background, the strange wobbling chatter when flowers grow... just all the depth and bass in the Boards of Canada samples that designer Zack Livestone uses for the backdrop in this abstract point-and-click adventure.

Of course, Deep Chalk is worth playing even with an inferior sound system. This is the most logical and straightforward chapter in a traditionally baffling series of games. You once again accompany a floating crystal through a world of photographic landscapes and chalked-in plantlife, coaxing various bits and tibbles into place in order to solve puzzles. Some objects need to be pushed, some clicked, some nudged. It's all very gentle.

The difference this time is that the crystal takes care of itself; once you clear the way, it wafts along with a grateful wobble (or maybe that's my imagination) and you can concentrate on breathing the next problem into order. There is also a focused left-to-right movement on each screen that makes it much easier to understand where the goal is. Small changes, but they mature the series. They help to define the player's role as a companion; not a baby-sitter.

A less welcome new feature is the custom cursor. In a game about smooth, subtle interactions, it's sad to have my pointer stuttering like a lifelong wallflower. I need a cursor that strokes with confidence, and the very nature of custom cursors in Flash means that every player won't get to have that.

With Phase Three, Zack Livetone gives us just as much reason to be excited about his new releases as we have for any of the other big point-and-click names. The Deep Chalk games have the look of the Ten Gnomes series, the gameplay of Samorost, and the music of Boards of Canada, but bring them together, and you have a delicate, almost mystical space to play in. Yes, in the end it's just a short string of puzzles with abstract graphics, but turn up your speakers.

Like the game, but am stuck on the second level.

Mouse over the round symbol up to the left and numbers 1-4 will tell you in what order you must hook the umbrellas, fly under them in rising order. There's a bucket to tip which does nothing?

is that the stick bridge and 3 seeds? need to get the seeds to the other side at same time... next, do the umberellas in number order.

nice game - does it stop after the numbers on the remote control???? shame.

Coming down the ramp to the radio:

Hover over sun to reveal stars. Click on each to remove barriers. Watch to left of bridge to see message "1969". Key into radio

im past the butterfly bridge. Then what?

Great game, a well worthy successor of the previous installments!

One of the easiest 5 mushrooms I've ever given a game.

Excellent little game. A tad short, yes, but the puzzles are just right, the music really augments the atmosphere and the style is just superb. Another 5 sta- mushrooms from me!

A beautiful little game but I am really stuck on the level with the floating orbs. Please help!

As sublime as the first two games in the series.

You can get by the sticks on the orb level by lining the orbs up on the other side.

Thanks JIGuest, but how do I get them to line up? I can't seem to control them and they fade away.

Second level, the cracked orb and the hole in the ground. Help!

Vogonviking:
to get passed the orbs..

move the mouse over them quickly if they stop, until they are lined on the other sides ground.

Seemed fun...till you get to just the 2nd screen and realize you have no idea what to do. :-/

Ah...nothing quite like pointless pixel hunting to find the one small part you can click on to interact with the puzzle.

Can anyone give any advice as to the second screen? I know it has something to do with the musical hooks, but what...

I gotta admit, as much as I like a good puzzle game one that relies on pixel hunting and worse, having the speakers on, makes me close the window. I'm at work, I can't play with the speakers on, and if what J said above is correct, I need to be able to hear the hooks in order to get past level 2.

About the puzzles that rely on sound:

There aren't any. You don't have to be able to hear anything to solve any of the puzzles. The sound is strictly atmosphere.

mouse over the orb from right to left to make it roll off. Click on the back of the telescope and hold down until you move away, that makes the image stay. Then pull on the small cord below to open the trap door, roll the ball into it.

At least, that's what worked for me.

if someone, then I really loath pixel-hunting and I routinely make remarks about it in my comments when i meet it in a game. Here i met no pixel-hunting. Maybe i only was lucky and clicked on the right place purely by chance, though...

As for speakers on... Well, right now I've got neither headphones, nor loudspeakers attached to the PC, so I simply HAD TO complete the game without any audio-clue. And it was no problem. Or again i got just lucky?

J: It has nothing to do with the order of the hooks. In fact, I don't think they're even necessary, but I'll leave that to someone else to test.

I recognise nearly all of the music samples used in this game, which I suspect means I listen to too much Boards of Canada. Ah well.

Good game though. Atmospheric is a word that gets tossed around a lot, but I think it definitely applies here. Mind you, though, I got stuck on level 2 for what seemed like an age, all because

I didn't realise you had to make the image from the telescope stay in place in order to roll the ball. I knew I had to roll the ball though, so there was a lot of frustrating mouse over action before I caved and looked at the comments.

Apologies to boatshoes, but that's not the solution to screen 2.

Very nice to hear Boards of Canada in a flash game like this. Thank you and my compliments, Zack Stone.

At last I've done it!! Thanks for your help chaps!

Boatshoes, I agree with you, I don't think the hooks are necessary either.

Wow. This game happens to be of the exact genre i like- pure point n' click with not too much item hunting. Sadly, this kind of game is not available much anymore (much to my dismay.) So i give a big thumbs up for this series- keep on going!

Frustrating, unresponsive controls and ultimately not funny at all. I'd rather play Samorost over and over again rather than this.

i really want to see the 6th screen but the orbs on the 5th one just wont listen to me(!) can someone help or not ? :(

I've read the walkthrough, but I'm still very much stuck on level 3.
I hover the mouse over the umbrella symbol in the top left, a sound plays but nothing appears to indicate what order I'm supposed to put the umbrellas in. I've tried clicking, randomly placing the umbrellas, but nothing works. I don't think I'm missing anything, but just can't figure it out...

Cute, pleasant, like the other two but just different enough. And I am pleased with myself for doing it without walk-through help.

Wave your mouse at them from top to bottom to get them started. The bottom one will go off-screen for a while.

First chase the other orb that went up. As soon as it starts moving (or maybe before), go chase the one that went right. The timing is just right that if you alternate, you can probably keep them going.

The third one will reappear coming from the upper-right at about the time you have the other orbs nearly in place. Quickly chase everybody into the path, and you're there.

It took me a few tries to figure this pattern out, and a couple more to execute it right. But it does work, and I am no speedy-mouser.

It's the three tiny dots surrounding the umbrella symbol. If you hover over one of those, little numbers will appear next to each of the four umbrella stations. If you accidentally do them out of order, just finish all of them and they will come off and you can try again. When they are all hung up (and stay hung up), hover next to that odd thing in the lower-right corner.

great game but WTF is up with

A good year, I remember it well!

I love the deep chalk games. I find myself wearing a little smile at the end of them, and I can get through them myself, if I wale away for a bit.

The atmosphere is very pleasant and very different. I had no trouble with the cursor (using a Mac with OS Tiger).

I keep getting messages that the deepchalk.net domain expired in January. Is it available anywhere else?

Did anyone else see a huge influence from Mateusz Skutnik's Submachine series? The artwork simply HAS to be from Submachine. Did ZAck Stone mention Submachine at all?

@Jae, yes Zack mentions inspiration from his games on his new blog.