Allow me to set the Wayback Machine for the year 1986. A new developer, Cinemaware, has decided to bring to the market a game with some of the most beautiful, detailed graphics ever seen. The platform of choice? The venerable Commodore Amiga. The game in question was Defender of the Crown, a strategy title set in the contentious medieval times of England. Unfortunately, the original game was released with many features either incomplete or missing entirely. Later ports would bring many features back into the fold, but none of them surpassed the graphic beauty of the original. 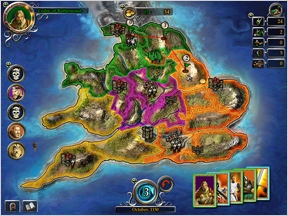 Fast forward twenty-some years, and Cinemaware, now under a new banner, has released a newly revamped version of the classic game, aptly titled Defender of the Crown: Heroes Live Forever. The graphics may not be as (comparatively) ground-breaking as the original, but the heart of the game remains true.

After the assassination of King Richard, a civil war arises, with Saxon and Norman lords struggling for control of the kingdom. You play as one of four Saxon lords. Each lord has strengths and weaknesses in leadership, fighting, etc. Much of the difficulty level in any game sets as much with your lord selection as your own strategic skills. Your goal is to defeat the Normans, either ally or defeat the remaining Saxon lords, and take your place on the throne of England. The core of the game takes place on a map of England, with various political territories marked out. You begin in control of a single territory, and move your army to capture adjacent territories. As you capture land, your gold value increases, allowing you to buy a larger army or to build fortresses to strengthen the hold on your territories.

When you come up against an occupied territory, you switch to a view of the field of battle, your army on the left, the opponent's on the right. At the beginning of each round, you are given the opportunity to activate a hero card. These cards are collected as you conquer territories, and offer such bonuses as reducing enemy archer effectiveness by 50%, or increasing your knight's effectiveness by 50%. Once you make your card decision, the round begins. Using simple yet effective animation, the battle plays out. If you find yourself outmatched, you can always attempt to retreat. This will often leave you with further casualties, and in some cases will be blocked entirely by your opponent, forcing you to fight to the bitter end.

There are other aspects of the gameplay that take place in the form of minigames. You can raid enemy castles for loot, or, in some cases, to rescue a fair maiden. This is accomplished in a series of one-on-one sword fights with various guards of the castle keep. Instead of the arcade thrusts and parries of the original, you are presented with a series of moves that the enemy will used during the round: attack, special attack, and defend. Some of these moves will be replaced with question marks. Your goal is to best match your attacks and defense against your opponent and hope that the outcome is in your favor. Once you defeat all of the guards of the keep, the treasure, whatever that may be, is yours for the taking.

You can also call or be invited to tournaments. These are either archery or jousting matches, and they can be played for honor or for land. Obviously, playing for honor is the easiest way to get experience with these games, for if you fall on your backside, all that will be hurt is your pride. Playing for land is just as it sounds: you put up a territory against one from your opponent, winner takes all. 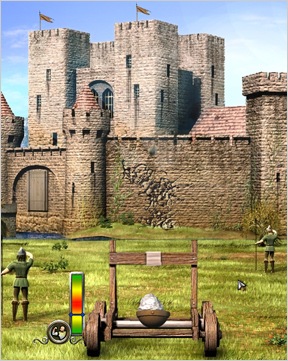 The last of the minigames happens when you siege a castle. You start by lobbing boulders at the castle walls, attempting to crumble them. Once you have punched a hole in the castle defenses, you can lob Greek Fire and disease into the castle in the hopes of defeating some of the army that awaits. The more damage you do, the easier it will be to defeat the remaining soldiers and take over the keep.

Analysis: Defender of the Crown: Heroes Live Forever is an excellent successor to the original game. It keeps intact many of the important things from the original game, including the minigames, much of the strategy of the main game, and the beautiful graphics, while giving the game an update that helps to bring it into the modern realm of casual gaming.

The computer AI is something that some players will find a benefit while others will find frustrating. There are five other lords battling against each other for control of the realm. This means that it is possible to go an entire game with little or no interaction with your opponents, save what has been initiated by you. Watching the lords battle amongst themselves can be entertaining, but it can also make you feel more like an observer than an actual participant in the game.

The minigames help to break the monotony of the strategic game. Feeling a bit anxious? Raid a castle for some much needed gold. Feeling competitive? Call a tournament and take your opponents honor or, if your feeling particularly skilled, his land. This is one aspect of the game that I'm glad survived the transition. Not only are the minigames fun, but they also show off some of the best graphics of the game. Moving through the dark depths of the castle keep during a raid is particularly spectacular.

While not as strategically complex as modern games such as Age of Empires or Empire: Total War, Defender of the Crown set the bar for strategy games of the time, and this latest incarnation makes for a perfect introduction to these types of games in a casual setting. For what dost thou await? Get thee out and download this gem! As you command, my liege.

Defender of the Crown is available to download from these affiliates:

The music is terrible.

Pity, because that was the best part of the old one.

I loved DotC on my old Commodore. Groundbreaking graphics, great music and pretty original gameplay. As far as I remember the game had only one slight flaw, which was that frequent tournaments were by far the most effective path the victory even though their minigame was the dullest of all. Still, I think I've replayed Defender to death.

I don't know that I would pay to play a remake, though. I'd rather hold an original in dear memory. I don't want it to go the way of Sid Meier's Pirates! - the remake was cool but it somehow erased my fond memories of the original, which was THE best game on Commodore, period.

Forgot to add: the lame "Heroes live forever" subtitle put me off buying right away. Who thought of that? Ugh.

I did, actually. :) Heroes Live Forever was the tagline for Cinemaware. It was added to differentiate this version from the original.

It was either going to be that or something like Defender of the Crown MMVII, but not sure if everyone would have gotten the Roman numerals.

The thing is "Heroes live forever" sounds more like a song from a Disney movie or an 80's James Bond title than a tag for a game set in Middle Ages.

The Roman numerals would have been a better choice. :)

Also, I've decided I'll check out the demo. There'd better be an original music on the title screen, though! :p

I played this game a few times in a row, too bad it only lets you play an hour :(

I found it rather easy to win to be honest. I was looking for a difficulty setting, but I couldn't find it.

Just spam those swordsmen which are super cheap and add a card to it in a battle and it's a walk in the park.

It reminded me of Lords of the Realm 2, which is one of my favorite games of all time :)

Uh oh. Due to legal issues, we couldn't include the beloved original music. Sorry!

Will this game be further developed?

I have a couple of issues with it:

The archery competition is a bit of a joke, the opponent's hit results should be randomised (perhaps dependent on skill), rather than a string of 5s.

I have no idea what is going on in the siege game - do the walls crack and make a hole eventually? What are we supposed to do, hit in one place or in various? It was obvious what you had to do in the original and I had it down to a t.

The movement dependency on fame really imbalances the game.

There is no reason for a modern PC game to show a castle siege battle taking place on a flat field outside the castle.

The raids take too long.

Jousts end after one round, not three.

Why was the Norman vs Saxon element dropped from the game BUT Robin Hood kept in?

The map seems smaller (could be wrong here) which means warfare is even more vicious and quick than in the original.

That said, battle cards are cool.