After a long day of slaughtering the innocent and raising the dead, the last thing you want to come home to is a bunch of bulky guards telling you that they own your domain. When the Lich King encounters this, he does what any purely evil overlord would do... asks them nicely if they can go home. When that doesn't work, he takes the small step from being polite to raising an undead army and slaughtering the lot of them without mercy. Make your own undead army that follows your every demand in Delicious Cortex an action strategy game. Sébastien Bénard's zombie laden game requires you to rid your lands of all living souls by gathering up the the occupants of nearby graves, which is done by simply walking over them using either [WASD] or the [arrow] keys. Once you have them raised, you can get them to obey you by walking in the middle of them and hitting the [spacebar]. As long as they're in your sphere of power, they will follow you and attack anything they can get their jaws around. But the human guards are armed, and are pretty good shots, so plan your routes carefully and take the least risks. 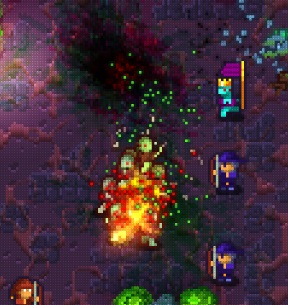 For being the Evil Lord of Terrible Darkness, you don't actually do much... besides reviving the rotting corpse of lives past that is. Besides that all you can do is move around, and you don't fight back or even attempt to move the crates. But with your creations eager to please, I guess in the end you don't have to. When they are close enough to the living humans or the wooden creates, the zombies will attack all on their own, but you have to be careful your large group doesn't split up with two or three goals in mind. This is done by you moving more towards what you wish for them to focus on. For being a game made in 48 hours by one person, it's shocking how well the AI responds. In fact, in the genera of zombie horde controlling games, Delicious Cortex is better than most I have seen with its outstanding graphics, clean gameplay, and levels that really make you think and plan on how to survive. It could have had more to it, like making a goal on each level for how many zombies should be left, but this simple game works without all the bells and whistles. The only thing that will make you frown is when it ends, as you could argue it was too short, but at least it wraps up the story with a clever little touch. It's a simple, sweet game that is sure to put a smile on your face as well as dreaming up what you could do with a mob of the undead.

You shall not pass!

I could do with a lot more of this. Maybe some different types of zombies for later levels?