When we last saw Emily, she had just said goodbye to her old restaurant and moved into a new home with her husband and daughter. Now it's time to settle into the neighbourhood and fix up the house while still trying to keep her business afloat. Emily is nothing if not a superb multitasker, but this might prove to be her greatest challenge to date. Join her in Delicious: Emily's Home Sweet Home, the latest episode in the highly successful time-management Delicious series by GameHouse, as she deals with six restaurants, a dilapidated home, and one particularly nasty neighbour. 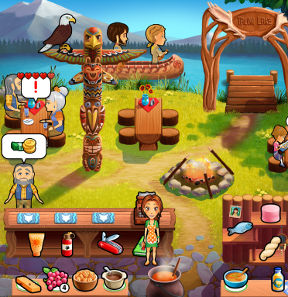 The basic mechanics of the game are still the same: make food, serve customers, keep everyone happy and Bob's your uncle. But what has always set this series apart is its ability to reinvent itself, so that none of the episodes have that repetitive, grind-y feel to them. And boy oh boy, is there a lot to do in this game. In addition to the three stars you can get for your performance, there are also mini challenges in each level, as well as entire challenge levels. The basic goal is still to finish all sixty levels, but this time round there's also Emily's new house to fix up. Every time you finish a challenge, you'll get a diamond to spend on furniture, which gives you a nice incentive to replay the game, as getting all the diamonds in one go is quite tricky. Even experienced players will have some trouble acing everything on the first try, but it never feels like the game deliberately sets the bar too high. Sure, some of the challenges are a bit too wacky ("don't serve customers until they get angry"), but even when you fail, it's usually by a little, and replaying the level just once often results in success. 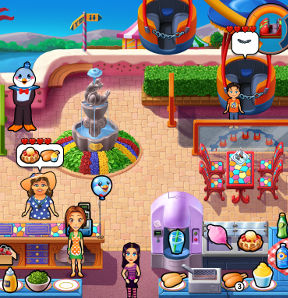 If you've played any of the Delicious games, you know that excellent storytelling is at the heart of the series. Emily's Home Sweet Home gives us two intertwined story arcs, both seamlessly incorporated into the gameplay. There's the more obvious one, where Emily and Patrick have to fight to keep their new home, as well as a more subtle and bittersweet one, about the joys and troubles of parenting. It's all sorts of funny, sad and endearing, and it's great to experience such a range of emotions when you don't really expect it. This is not to say that the story takes itself too seriously, but it's just that bit deeper and more mature than your typical casual game. It's also worth pointing out that I want Emily's house! Ahem, what I mean is, everything is so adorable, from little Paige's room to the cosy kitchen to the charming garden. The restaurants are also nicely varied, vibrant and colourful, even if a good number of players will hate the amount of broccoli quiche they'll have to bake. In fact, this is pretty much as close to perfect as time-management gets. The previous installment was maybe a tad too short and easy, but Emily's Home Sweet Home has rectified that and given us much more to boot. If you want a game which will cheer you up, entertain you and charm you (and who doesn't), get the demo and try to quit playing before the hour is up. I dare you.

Note: Currently, only the Collector's Edition is available. It contains bonus levels and other material. Remember that Big Fish Game Club Members pay only $13.99 for Collector's Editions (or 2 club credits), and collector's editions count 3 card punches of 6 total needed for a free game.