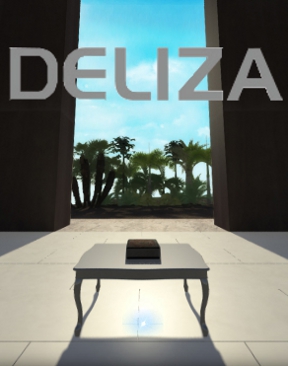 Some things in life are purely about experience, like bungee-jumping and rollercoaster rides. And there are games with no apparent meaning, that draw you in simply to enjoy something different, like Deliza. This point-and-click curiosity is essentially an advergame without the hard-sell elements, diffcult to define yet an experience in its own right.

An intrinsic element of Deliza is the three-dimensional viewing, requiring a simple click and hold of the mouse to scan each screen and giving you even more than a 360 degree panoramic view. Although the navigation is fairly static in that you basically feel you're standing in one spot in each screen, there's so much to look at as you move your mouse and examine the detailed environment from the sky to the ground and all around you, in an almost virtual reality type experience. The aim is practically secondary to the viewing; locate items to progress through the game, and like the navigation there's not much room to move. Progression requires that you click on everything possible, and often even re-click on items later to uncover clues and further items. Objects to be collected or clicked on are discernible by a silvery-blue glimmer and a tinkling sound, so it helps to have the volume up.

The viewing by moving the mouse around the screen can be a little disconcerting, perhaps even a little disorienting. But don't despair as there are navigation arrows to the bottom of the screen that you can click to limit any potential motion sickness. Clicking on items will either add them to the inventory at the left of the screen, or open small screens. Either way, the clicking can sometimes feel delayed which may be a frustration for some, but perhaps reminds us to slow down and enjoy the experience of feeling like we're in a virtual extra-terrestrial environment. Items in the inventory will automatically allow progress so no need to click or drag objects to use them.

Although Deliza can be considered to be almost purely experiential, there are inherent challenges. Take a wrong turn and you're stuck, or complete the game without actually finding all that can be found. Thankfully, the atmosphere of sights and sounds makes it less of a chore to start over. And on an extra-terrestrial planet where there are four seasons in one day, it's actually quite delightful to explore more than once. There's not a whole lot more that can be said, other than repeating that Deliza is an experience more than a game. With beautifully detailed 360 degree plus environs with sound effects to match, it's a pleasure to spend time exploring the offerings. It doesn't make a whole lot of sense, but hey... neither does bungee-jumping.

Deliza Walkthrough, to achieve 100% in the game.

Inside the Temple, part 2

Okay, I'm stuck. I've gotten into the temple with the key and I've got four blue gems. I seem to have run out of things to click on. Now what?!

I had the same problem until:

There is another "shiny" by the base of each statue. Getting those should advance you.

And now I am stuck in:

Have managed to open the wall, but cant use the spaceship

Can only find seven gems - good game though but to short.

i was distracted by the beauty of space and completely forgot that it was a game...i spent half an hour just spinning around space

any one figure out

how to get in that door outside the temple yet?

to get in the spaceship

managed to finish the game, but only with 11 gems. wonder if there's a special ending for finding 12...

hopefully a walkthrough is on it's way :)

Hey all,
Out the 1st time with 75%
7 blue "sparklies" in inventory
globe
"Sucai penguin boarding pass?" from crypt chest.

Tried going down right side stairs to crypt - not a good idea.

Never had any interaction with small "shrine" to left of temple, anything to the right of temple or anywhere else inside of temple other than statues area and book on table.
Missing something somewhere but don't know what???

I love this kind of game. Beautiful graphics. Short but very good. It is graphics processor intensive and slows down at times on my laptop.
Takes me back to the Myst series and other adventure games of that era. Love the 360 degree tilt / pan navigation!

Back into the fire to figure it out...

Does anyone know what to do with...

The last gem just has to have something to do with the small "shrine" to the left of the temple and the new pic in the temple book.
I just can't figure it out yet.

Here are some spoilers to show my progress so far...

Top of furthest right palm tree, right side of temple

Blue spot on sand in front of temple

Left side of temple door - go into temple

On head of right side statue

Under table with book on top - exit temple

Click base of both statues, get 7th gem, sculpture on pedestal lights up and book opens with clue shown. Exit temple

See sun and birds, gem in the flock of birds

Click sculpture, left side of door, opens stairs in sand to lower level crypt. Back to temple first!

Gem on sculpture between statues. Book on table has new picture

Plant on left side exiting the temple. Exit and go down left set of stairs to crypt

Will follow with the rest of my progress in next post. Have to go now, back soon...

Wait a minute... Are we really supposed to find invisible gems like

the ones at the feet of the statues

The graphics are really awesome, but that is more than questions this one as a "good" game...

Bumjelly here, OOPS!
I just saw a mistake in my hints. Rookie mistake, 1st time posting hints. Not sure how to "edit" a published post.

The "second" 8th spoiler does not "get" a gem into inventory. Sorry.

[We'd be happy to edit it for you, but I'm not sure what you're saying here and how the previous comment should be edited. If you give specific edits to make, will make them for you. -Jay]

There is more to the game than just finding the gems. Gathering them allows progress towards the goal of escaping the planet.

Bottom of entry gate when closed

Other things found for progress in crypt...

Globe in corner, left of crypt entry gate. Purpose is unknown to me at this time.
Key to chest in skeleton's hand.
"Boarding pass?" for escape ship in chest.

Have not figured anything else out. Yet!

Deliza Walkthrough, to achieve 100% in the game.

Inside the Temple, part 2

So what do we do after we go in the spaceship?

I'm back in the "galaxy" mode that I started in. There are two hotspots: the two Earths. One is the logo, the other doesn't appear to do anything.

And, of course, there is the clickable spot at the "bottom" of the screen that started that adventure.

Ah. Rank S is for 100% completion. You do NOT have to open the right globe to get this (I was worried).