The original Demons vs Fairyland by Storm Alligator made kidnapping both adorable and strategic as you took control of a nefarious army of evil critters who had absconded with all of Fairyland's tots for unknown purposes. Since the good fairy folk aren't going to let you just saunter off with their kids, in each stage you had to hold off waves of enemies who wanted to carry off the children by placing towers to defend against the forces of good with skeletons, gooey beasts, demonic archers, and more, all of which could be upgraded in various ways to suit whatever you were facing... to say nothing of a few deadly spells of your own, of course. It was fun. Addictive. Challenging. And now, thanks to help from Armor Games, Demons vs Fairyland is available for iOS! This isn't just a simple port... with enhanced visuals, new levels, a new interface, equippable gear and more, it's a tough but polished and engaging strategy game that's perfect for on the go. 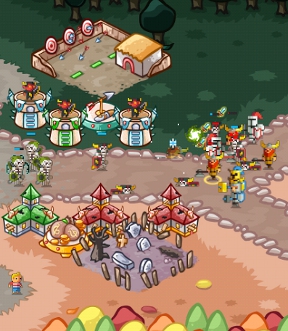 If you played the browser version, then most of the mobile version will feel very familiar to you since it controls the same way. Plop down towers within range of their supporting base to take out the bad (or, uh, in this case good) guys before they can carry all the children offscreen. Cemetaries can spawn skeletons, for instance, who will attack enemies head-on, while the energy wells will let you place puddles of the beast, who can lob powerful spells slowly at a distance. As enemies fall, they drop cash you can use to buy more towers or upgrade the ones you've got, while at the end of each level, you're granted experience that works towards leveling you up, which nets skill points to spend on permanent upgrades for each tower type. Unlike the original game, in Demons vs Fairyland for iOS you can only choose between stock difficulty settings rather than tweaking different variables to earn more experience. It's also a little disappointing that we've lost the ability to speed up levels. While the basic gameplay remains mostly unchanged, however, there are several things that change things up quite a bit. You can earn gear from treasure chests now that you can equip for bonuses, and candy gathered as loot from stages can be spent on either powerful spells or more treasure chests. The levels on the whole feel much better in terms of balance this time around... still challenging, but less like battering at a brick wall with your face and hoping you hit the sweet spot. The emphasis here is on strategy, placing different tower types in such a way that they support one another and choosing complimentary upgrade paths for each in longer levels, especially since so many enemies have powers that can spell big trouble if you aren't prepared.

As you might expect, you can pay money via an in app purchase to outright buy candy if you please, but happily the game neither feels unfairly geared towards forcing you to eventually have to shell out, but also offers enough candy that you can still buy both more spells and loot (which are entirely optional) without spending a dime. If you do decide to shell out, the prices are nowhere near as egregious as they often are in other games. Of course, the most important thing about a mobile game is how well it plays as a mobile game, since some titles make the transition better than others. Happily Demons vs Fairyland feels right at home on the iOS, largely due to a simple, friendly user interface with buttons and navigation that are easy to use on a smaller screen... heck, it even ran buttery smooth on my ancient first generation iPad. Demons vs Fairyland is a gorgeous, challenging, and professionally polished little title that deserves a place in any strategy fan's mobile library. The amount of work that's gone into making it shine is clear, with more than enough content and improvements to make it worth the price, and the end result is a game you'll spend a long time playing.