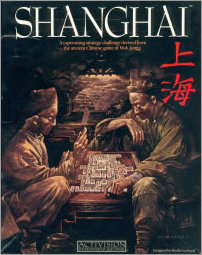 Almost twenty years ago, I would often play a solitaire game on the Mac called Shanghai that used Chinese Mahjongg tiles for play. Created by Brodie Lockard and released by Activision in 1986, Brodie is credited with the original idea, programming and artwork for the game. Since then there have been many clones and copycat versions, but most still rely on the same tile-matching and removal gameplay. Considered a meditative strategy game, Solitaire Majongg is played with a standard set of Mahjongg tiles stacked on the play field in a precise formation. The rules of play dictate that you can remove two like tiles from play only if each tile is "free"—meaning there is no other tile physically on top of either one, and they can each be slid freely off the stack either to the left or right. To win, you must remove all 144 Mahjongg tiles from the play field.

If you are new to Mahjongg tiles, you can visit this site to learn more about each of the suits and what they look like. The important thing to know when playing Solitaire Mahjongg is that there is generally four (4) of every type of tile—the only exceptions being the four seasons (spring, summer, fall, winter) and the four flowers (orchid, plum, chrysanthemum, bamboo) of which there is only one each. 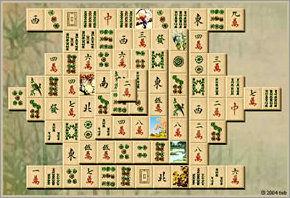 This version of Solitaire Mahjongg was created by Thomas Weibel of Switzerland in June 2002, and coded using only DHTML/CSS and JavaScript. Since then, Thomas has updated the game regularly with new and improved features, including additional tile sets, and to date has had over 5 million visitors to his site. No plug-ins are needed, just a JavaScript capable browser, and loads of time to kill.

what is teh perfect way to start ?

only succeeded once in ten times to clear the table

Hello all you players - the URL of my game "Solitaire Mahjongg" has changed: Visit http://www.mahjongg.li - and there's what you were looking for. ;-)
Thomas

Thank you kindly, Thomas, for the note about the change in URL. I have updated the entry appropriately. cheers! =)

I have been a big fan of Thomas' version of this game for a while. Recently, however, I have ceased to play because the game now annoyingly refreshes the page every time I select a tile. It is virtually impossible to play with the page flashing all the time.
Is this a problem at my end or should the game do this? Any solutions?
Thanks

Sarah - I believe the problem to be with the browser you are using. Different browsers handle the rendering of DHTML differently. I experienced the problem as you describe when using Firefox on my Mac Powerbook running Panther (10.3.9), but do not experience it when using Safari.

You might try a different browser to see if that helps. I will look for an alternative Mahjongg game to post in the meantime.

Thanks for the advice!

Sarah - your problem is caused by a simple misconfiguration of your browser: If you are using the Microsoft Internet Explorer, click 'Extras', 'Internet options', 'Temporary internet files', 'Settings...'. Make sure that you have the 'Automatic' option checked in order to prevent your computer from re-reading all the images after every click. Now everything should be fine. ;-)

Vasquez, the best starting move is to clear the highest Mahjongg, then the left and right ones. It would be easy to solve after. After all, I am Chinese...

Woohoo! I've always loved this type of game. This is the first time I've played and actually cleared the board on the first try!

There isn't really a perfect way to start the game.

What I do is start from the top of the stack and try to work my way down. You want to expose as many tiles as possible and not leave them stacked. Sometimes it works, but sometimes it doesn't.

Tee hee, I actually do the opposite - take off the top one, yes, but then work my way in from the sides. Once I start getting near the middle (maybe one row out on the bottom level), then I start doing both. That way I'll still have a lot of available tiles to choose. Buuuut then again, it doesn't always work, either. =p

remember when windows (95 i think) came with a version of this called taipei? this brings back memories!

I'm pleased to be able to say that this now works smoothly in firefox!
I'm still enjoying this game. I think I prefer the way this one looks out of all the mahjong games I've played online.

this a game i love to play all day long nyreque204

There is no perfect way to start. However, I find that the most efficient is to always look for the move that will "liberate" the most tiles for upcoming moves. I clear the board most times that way.

almost seems like this game deliberately baits you into picking the wrong tile, especially if you have 3 to choose from.
really tought to pick the right one 7 or 8 times during a game. when you finally beat it you get this dull boring "congratulations you won", you should get a "Hail to the Chief" by the New York Symphony Orchestra!!!