She's run hotels and point-and-clicked her way to success, but Flo returns to her roots with Diner Dash 5: BOOM, the latest installment in the popular time management series. An underhanded trick by a shadowy Person of Interest results in Flo's beloved diner literally exploding on the spot, and she needs to rebuild it if she wants to stay in business. With fifty levels, full of hypnotic clowns, angry businesswomen, hungry construction workers and more, Flo has her work cut out for her. It's just like that one summer I was a waitress in my mother's restaurant, only with less food on the customers!... probably. 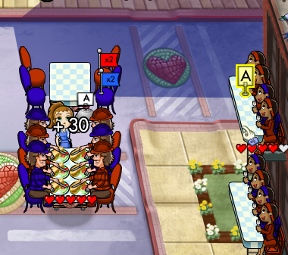 By now, you're probably familiar with the frenetic, quick-click gameplay. Seat customers as they arrive by dragging them to a large enough seating area, putting their butts in matching coloured seats for extra points. Place their orders, deliver their food, and make sure to bring them their check and clear the table when they're done. All this is done simply by clicking on the appropriate station on screen, and the tutorial does a good (if mildly patronising) job of walking you through the basics. There are different customers to contend with, and some are more patient than others; drag your feet too much, however, and you'll quickly start losing business. Not something you want to happen, since you have to reach a certain high score to proceed past each level and have more money to buy important upgrades.

This time, Flo has a bit more to contend with than low tippers. Weather is a factor, so you'll need to take the appropriate steps to shield your patrons whenever Mother Nature gets her undergarments in a bunch. Seating can sometimes get a bit cramped, which forces Flo to improvise unconventional dining tables which aren't always convenient. You'll also get to rebuild Flo's diner from the ground up, picking the styles you want for each section, and make improvements to the neighbourhood. Which, if you're like me, will consist entirely of plastering down pink hearts at every opportunity. (I wonder why the city planning department doesn't return my calls?)

Analysis: I admit, I was sort of hoping for a story about how the restaurant would explode if the number of customers served went under sixty, but I suppose BOOM's tale of a restaurant becoming so stuffed with eager patrons that it literally blows up is okay too. By now, the series has figured out a near-perfect formula, and Diner Dash 5: BOOM is the perfect mix of fun and challenging. The difficulty level is more like a difficulty wave, gently cresting and falling with each new area. The game does occasionally feel like it's forcing the "design your own diner" concept a bit when your sole interaction in some building sections is literally just to click "Build It!" when there are no choices to make at all. 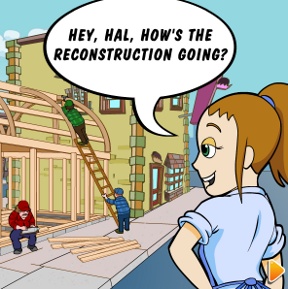 Any real issues with the game are the same "problems" that have persisted from the series' earliest installments. Some of the additional tasks, such as sending someone to repair a frequently leaking fire hydrant, for example, feel like pointless busy-work. It's also frustrating that any bonuses you buy for Flo, such as increasing her speed, vanish once you change locations. One of my biggest gripes is still how fiddly seating people is. It would be nice if the game would automatically snap people into the appropriately coloured seat instead of making you waste time trying to shuffle them all around to get the maximum bonus. When later levels get frantic, it's easy to wind up just slapping people wherever they'll fit because you're too busy to spare the few seconds needed to place them properly, which means it quickly becomes difficult to reach the "expert" score level.

The gameplay is still as fast and frantic as ever, and if you enjoy time management games, then Diner Dash 5: BOOM is probably a solid bet. It's bright, colourful, fun, and features the least sincere "NOOOOOO" in gaming history. Really, guys, it's Diner Dash, and if you're a fan of the series, you've probably already bought it. While it doesn't do anything really revolutionary, it is an extremely well made example of the genre that shows other titles how to do time management right. Just remember, folks; always tip your server.

Wow, another Diner Dash!! I'll be sure to check out the demo right away. My monthly budget may have to suffer for a gem like this. Thanks for the update JIG!

is anyone else getting tired of diner dash...?
and diner dash styled games...?

i suppose the good side is, they are pretty cheap

I love diner dash games and i can't wait to get this one too. but the same thing can be said for tower defense games, first person shooters, halo, warfare, etc etc etc. People gravitate toward the type of game they like most and time management games like diner dash really make me happy.

Is it my imagination, or are these newer Diner Dash games easier than the older ones? I could never get halfway through the first area of Flo Through Time.

I think this version is too much. In one level you have all the things from other version. Is time to let this game go. Please!!!!.

I'm a little sad about the removal of an endless mode. The customisation feature is nice though.