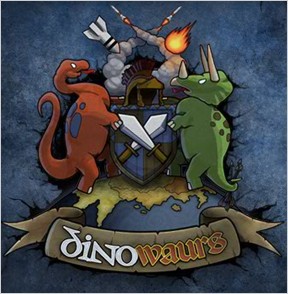 In the stone-age town of Bedrock, there's nothing more common than dinosaurs. We use the huge stegosaurus as a bus for public transportation. The rock quarries are full of brontosauruses, moving huge stones from one end of the quarry to the other, and back again. Some people even keep some of the smaller dinos as pets. Is it any surprise that we also use dinosaurs for military actions? Strap a cannon to the back of a triceratops and you've got a jurassic tank bent on domination. Dinowaurs from Intuition Games shows us that those stone-aged humans were well-versed in the art of strapping large implements onto the backs of dinosaurs for their own advancement.

Dinowaurs is, at its core, a projectile game in the vein of Team 17's classic Worms series. You control a dino of your choosing, be it ankylosaurus, stegosaurus, triceratops, or brontosaurus, equipped with various armor and weapons. The goal is not only to destroy your opponent's dinosaur, but also to take over their villages. Once you have managed to destroy and/or capture all three opposing villages, you win the match. These villages are not only important from a territorial standpoint, they are also the means by which you collect gold to buy weapons and ammo, and also where you go to equip weapons and heal your injured dino warrior.

Analysis: One of the first things you will notice when playing Dinowaurs is the art style. The backgrounds for each of the battlefields are lovely to look at. An artistic backdrop for the carnage that is happening in the foreground to be sure. The dinos have a much different look, a fun art style that may remind you of a certain animated cartoon on Comedy Central. Strap a meteor-seeking radar dish on the back of an ankylosaurus and you can't help but flash back to Cartman with a huge alien probe coming out of his… umm… back-side. The surrealistic graphics are part of the charm that is Dinowaurs. It doesn't matter what weapon you use, they all are designed to look like Atlas carrying an alien spacecraft on his mighty shoulders.

One of the more bizarre has to be the U.S.S. Iowa weapon. We'll forgive the fact that the U.S.S. Iowa was a lead-class battleship and not an aircraft carrier, because the weapon is required to be an aircraft carrier for the gag to work. Once equipped, your poor dino will find itself hauling an actual aircraft carrier around on its back. When fired, the carrier sends out a squadron of bombers that drop their ordinance where you choose. The entire scenario is completely preposterous, which is what makes it so much fun! 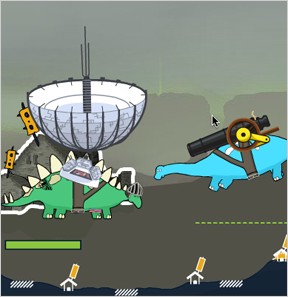 Along with the variety of weapons, you can also customize your dinosaur with various clothing items, tattoos, and armor. These can be purchased either by winning ranked matches (more on that) and earning DNA points, or by earning Kreds, Kongregates' own "currency." Once purchased, these "boost" items will change the stats of your dino, making it faster, more resistant to enemy fire, etc. This is one of the neatest features of the game, but it is also one of its most limiting factors. Let me explain…

There are two types of matches that a player can join. Unranked matches are fights against other players that act as skirmishes or practice matches. No points are earned, and the outcome does not affect your statistics in any way. This is a good way to get your feet wet and try out the features of the game against a human opponent. Ranked matches, however, are played for points. You earn DNA points by killing the enemy dino, destroying and capturing enemy villages and, ultimately, winning the match.

Now, of course, this should become easier the longer you play the game. And, as you earn DNA points, you will be able to slowly upgrade your dino with better boosts. The system would have been nicely balanced had that been the way of things. But Kongregate, whose goal as a portal is to direct traffic to other portions of their site, allows players to earn Kreds by doing other things on their site that have nothing to do with Dinowaurs. So, in essence, the battles eventually come down to whoever has enough Kreds to buy the maximum upgrades for their dinosaur. Ranked matches have basically taken the use of boost items out of the equation, since the player with the maximum upgrades will have a marked advantage over any lesser dino. Luckily, a fairly advanced matching system will help keep you from walking in on a veteran while you are at noob status, but it's still not a perfect solution. I won't judge the game on this aspect, but it does factor into the fun.

The politics of portals aside, Dinowaurs is a blast to play. The art style is fun and care-free, the music is catchy, and the weapons are weird. If you're looking for an escape from the ordinary projectile game, and a chance to interact with actual human beings, give Dinowaurs a go.

Unfortunately, as an awful lot of people find, it sticks at connecting for many.

glad I'm not the only one stuck on connecting...

It's funny to me that everyone refers to Worms when discussing projectile games. I was introduced to the game style with Scorched Earth — which I still enjoy playing.

Actually, I just remembered, I was first introduced to projectile games playing QBasic Gorillas on DOS boxes. Of course, that was extremely simplified. And nothing beat adjusting the blast radius in the source so that every banana left a 1/2 screen-radius hole. Ah, those were the days...

In regards to Kreds, the only way I've seen to get them is to spend actual money. I could be missing something, though, as I haven't spent a lot of time over on Kongregate.

Yeah, you're wrong about Kreds; you only get Kreds by spending money. Dinowaurs is a premium game because you can literally buy yourself an advantage.

There is no way other than spending real world money to get Kreds at this time. That's because Kreds are also used as "tip jar" money. You can buy $5 worth of Kreds, and give a $5 tip to a game, and AFAIK Kong doesn't take a cut, which is pretty nice of them.

But if they provided some way to earn Kreds without spending money, that would be asking for trouble with regard to the tip jar use. People would hack or fraudulently misuse whatever mechanism to get Kreds without paying for them, and then "donate" them to their friends' games.

So by giving (tipping) Kreds, isn't the receiver then earning Kreds without spending money, and hence "by doing other things"?

I think that's the point Marcus is making in the review.

I already didn't like this game when it got badges on kongegrate and tried it out. Aside that it currently is not working at all, and if it had hugh lags I don't consider the game mechanics themselves to be balanced or having any real depth in them. Its all only woo mega-powerfull weapon on the other, woo I got a supreme-mega-overpowerfull thing too! woo... and so on. First game I needed to figure out basics, second game I got bored after half an hour firing airstrike missles at longrange and fire at close range at each other without a real change happening to the game..

This game is very unlike to worms, as there it was a real art to throw a banana precisely where it belongs to, or to climp a cliff with the rope. I don't see much arcade challenge in this. And I don't see much strategic questions too. currently its either go with a sam directly at the other, or run back to get the airstrike and run that on the other...

The arts are nice, this is true, and since its IMHO the only good thing to say, its no surprise the arts get soo much credit in terms of % of text in the review.

I'm Chris Pasley, Director of Games at Kongregate. I want to clear the confusion up here. Kreds are a real-money virtual currency at Kongregate. Paying real money is indeed the only way to get them. It's our policy in these games to allow a player to be able to earn anything he or she can buy as well, which is where the in-game DNA comes into play.

Also, kreds that dvelopers are tipped cannot be used by that developer to buy microtransaction items - they have to be paid out in cash, for legal reasons.

Thanks for the review!

Can't connect to the server, can't launch a single player game either. The game does nothing when I click on any of the tutorial levels.

But what none of this mentions is that the game is unplayably buggy.

Okay, usually I don't comment on my own reviews, but I do feel the need to set the record straight...

Chris, my apologies to you for misrepresenting the Kreds system at Kongregate. The ironic thing was, I started writing the review under the impression that you did have to purchase Kreds, but then after further research, I thought that I had found evidence to the contrary. None the less, my criticism of the system stands.

As for the "bugginess" and me not mentioning it, all I can say is that in all the time that I played (which was significant in preparing for this review) I did not once run into a bug, crash, or disconnect. I am running the latest version of Flash with the latest version of Safari on Mac OS X Leopard for what it's worth. If a game is unplayably buggy, I will say so, but more to the point, it will probably never be featured here.

Marcus, does it work for you *now*?

[Edit: The game works perfectly for me right now. I just matched and played a full game without a hitch. Played one earlier this morning, too. - Psychotronic]

@fuzzyface: Same here. Just loaded up the game, matched up, and summarily got my butt kicked. But it all worked flawlessly.

Interesting since i cannot connect for days now, but it did work back then so its no a flashplayer problem or anything like that.

Maybe they block all transatlantic connections or something like that?

The one time I played I never had a problem with.
That said, I had fun with the Lawyers. It's how I won my one game, lol.

I think there should be a mode with no boosts.