If you've ever wondered what it would be like to egg the Flintstones' car, you're about to find out. Disaster Will Strike 2 is Anton Koshechkin's sequel to the physics puzzle Disaster Will Strike!, and it picks up where the original left off. Your goal is to destroy all the eggs on the screen by destroying the structures around them (� la Sieger), and your tools are various natural (and un-natural) disasters. (Haven't you ever wanted to use bees as an offensive weapon? I know I have.) 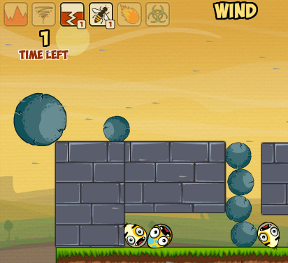 Disaster Will Strike 2 ramps up the difficulty much faster than the original, and it has more levels, but the only really new element it introduces is the Epidemic tool that lets you infect an egg, which then infects other nearby eggs. But each level presents a unique challenge, and fans of the first game will simply crack over the sequel. (There had to be an egg pun in there somewhere, don't look at me like that.)