Turns out the reason dinosaurs died out was because they decided to be colossal jerks, at least according to Qaibo's physics puzzle Disaster Will Strike 3, which informs you that since all the dinosaurs have turned evil, it's up to you, as the universe, to wipe their eggs off the face of the earth with a few well placed natural disasters that will destroy all of them. Hey, if eggs without arms or legs or really anything other than evil grins are somehow able to build complex structures to protect themselves, that is not any business I want to be a part of. In each stage, you've got a limited number of different types of disasters, such as earthquakes or floods, and you have to figure out how to use them and where to set off a chain reaction that will destroy the eggs by crushing them or dashing them against rocks. Earthquakes, for instance, need to be used on the ground, but will shatter any glass atop it, while wind will blow any round objects around. Ultimately, victory is yours when all the eggs lay an gelatinous mass of ruined yolks on the ground. Or hollow-eyed drowning victims. Which is... sort of disturbing, actually. Is enjoying this game some sort of psychiatric red flag? 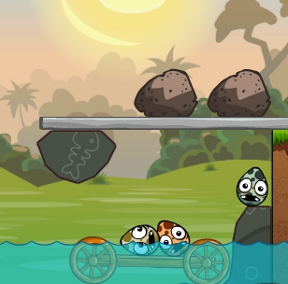 Unsettling sociopathic implications aside, if you don't mind the morbid subject matter, Disaster Will Strike 3 is actually pretty clever. It's not just mindlessly throwing down tornadoes and floods willy-nilly, since each level is set up in such a way that you actually need to figure out how to use your semi-phenomenal, nearly-cosmic powers to get the eggs in place for their eggs-ecution. (Sorry not sorry.) Since eggs float, for example, they'll just bob harmlessly atop the surface of your flood waters unless you figure out how to use your surroundings to keep them submerged long enough for... well, you get the idea. It's not drastically different from the original game or the sequel apart from some different disasters to use, although the level design does on the whole feel more creative. If someone starts cackling and dry washing their hands while playing this, and maybe grows a spontaneously Snidely Whiplash moustache, you might want to give them a wide berth. For the rest of us, Disaster Will Strike 3 is a solid little physics puzzler with a whole pile of clever levels that makes for a good chunk of gaming. Don't feel too bad about eradicating the smug little jerks... you can't make an omelet without wiping an entire species off the face of the Earth. I think I learned that from Doctor Who.

Okay, are the eggs in level 50 supposed to be indestructible?

No, just extremely bouncy. If you dig in the right spot, they can be gotten off the screen though it takes trial and error to get them all off. I'm trying to get all stars on level 41. Just can't seem to get the second star.

This is definitely the best title in this series (which has always been quite enjoyable). The addition of multiple ways to solve each level is really cool. There are a few I still haven't figured out.

The second solution to level 50 is really annoying though. I think they could have given us one more meteor cast since it seems to just be luck whether or not enough eggs bounce into the hole. The first solution is much better since you have plenty of tools to work with. I think some middle ground between "everything imaginable" and "almost nothing" would be better.

But over all it was great.

That spoiler is for level 41, for the second star.

Can anyone help with level 13 second star? It's the only star I have left.

OMG. Thank you. I'm so dumb I never realized I had 2 swarms. I kept trying to do it with one. That was way easier then I was making it. Thanks again!

Can someone tell me how to get the second star in level 45?

Is it impossible to get more than one star on level 1?

Actually I should ask what causes the padlocks to disappear.

As you move past the levels, you will unlock different disasters. The padlocks will disappear when all disasters to be used in that star/level have been unlocked.

I skipped up to level 50. Anyone got a solution to the 1 landslide 2 meteor problem that isn't

Nope, the second solution to level 50 really is just luck. You have to keep trying until the eggs all happen to bounce into the hole. It's annoying.

Puzzlin.cae - are you sure you meant level 45? Both extra stars are extremely easy...

For the second star use the meteor to destroy the top and leftmost brick so the bomb falls down and blows up most of the rest of the bricks. Then just use epidemic on the armor egg in the middle which will kill all but two, and bees on the egg all the way on the left so they don't get blocked by the last of the bricks.

I guess I'll go through and try to beat all the 2 and 3 star puzzles but so far it's really annoying that choosing a previously beaten 1 star level doesn't go straight to the star selection menu. It takes you back to replay the first star and you have to pause to select a new star.

exactly the same. Just use the meteor to blow up the egg stand and have the metal bars flip over the wall and smash the last egg. You don't need the other disaster on either of them. Just aim full force from the sun toward the left top corner and that will cause the bars to fall on the right side dynamite which will explode and push the bars over.

If anyone remembers where they aimed to beat level 50 star 2, let us know. I'm giving up on it. Angry Birds style random precision is lame.

Can anyone tell me how to get second star in level 47, please? That's my only left star. Bees seem to be too slow for that...