Have you been going through Dolphin Olympics withdrawal over the last few years? Don't worry! Series creator Alan Rawkins has been hard at work on a tasty little surprise: Dolphin Up, a mobile version of the water-based stunt game, now prepped and ready for your iOS enjoyment! It's all the splashes, all the high scoring, high flying acrobatics of the browser games squished into the palms of your hands. Plus, there's plenty of that squeaky, jittery, uh, clicking and whistling... sound... whatever you call that noise dolphins make. It's got that! 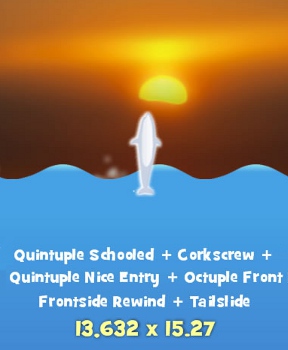 Dolphin Up takes the refined tricks-based sandbox formula from Dolphin Olympics 2 and translates it neatly to the touch screen. Swimming through the salty blue sea, tap the left side of the screen to turn left, or the right side to turn right (you can switch to a more free-form touch-based system in the options menu). Pick up some speed, then leap out of the water, performing as many flips, spins and other tricks as you can before landing a perfect re-entry. The more stunts you perform, the more points you get and the more speed you gather, allowing you to leap higher out of the water, giving you even more time to pull off cool acrobatics. Who knows, maybe if you're skilled enough, you can leap to the moon? Or even further?

Dolphin Up features plenty of achievements to unlock and secrets to uncover, all obtained through persistent, creative play. You can choose between free swims and timed dives, the former allowing you to play without a time limit and the latter ending after a two minute round. No matter your mode, the basic idea is the same, and you'll be amazed at how captivating it can be seeing what kind of tricks you can pull off with each jump.

Dolphin Up is a fantastic update to an already-classic browser game. The visuals have been improved while keeping the best aspects of the previous games intact, including fish followers, dash rings, and a few other niceties. As with its predecessors, Dolphin Up never over-complicates things with crazy gimmicks, it's just you and the sea, performing stunts over and over again. And that's exactly what makes it so much fun!