Dominoes is probably pretty darn close to the original tile matching game. With a genre that's been around since before computers, it's hard to keep related games feeling fresh. But now you can play dominoes by dropping tiles rather than placing them in Domino Drop, a strategic puzzle game for your iOS device (Android version coming soon!) by Vitalii Zlotskii. Touch and swipe to align your tile, and release to let it go. Reminiscent of Dr. Mario, when two or more matching pieces touch, they disappear, leaving the other half of the domino to drop down. Unlike Dr. Mario, however, you can't rotate your tiles. The game keeps track of both your score and how many dominoes you've dropped, and when the board fills, it's game over. 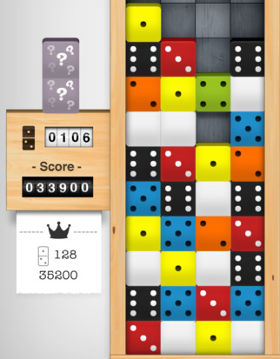 Of course there's always at least one exception to the rule. Blank white tiles need double the love, requiring at least four touching pieces to be removed from the board. The game is not about speed. It really pays to take your time to think about your next move, and setting up a cascade of clearing dominoes is immensely satisfying. There are three game modes to choose from. In the basic mode, you get to see what piece is coming up next, so you can plan a little bit, where in the pro mode, the next piece is a mystery. The third way to play is called tails. In this mode the number of white tiles you need touching goes up one each time you match them, and the goal is to see how many you can match before the board fills. It's great that there is more than one way to play, but I'd like to see it expanded even more. I'd love to see different sized boards, for example, or perhaps a challenge mode where you have to remove pre-placed tiles. Domino Drop is a near perfect blend of skill, strategy, and luck, just beware that I found the controls maybe a little too sensitive, which occasionally made me drop a tile where I didn't mean to. There's no lives to worry about, and no ads or in-app purchases. With a laid back jazzy soundtrack, crisp colorful visuals, and the simple to pick up gameplay, it's easy to get sucked in, and hard to put down as you try to beat your high score.