Open the door and get to the next room; repeat as necessary. That's the goal of DOOORS, a cute little escape puzzler from our old friends at 58 Works, the team behind games like On-Sen, Kalaquli, and Evolution. 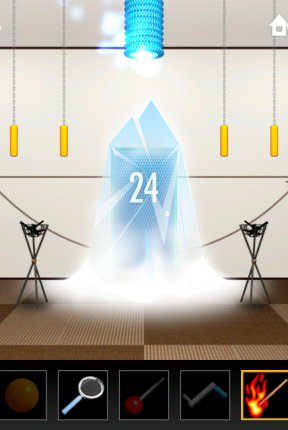 There's no four-wall navigation in DOOORS; it's just you, your inventory, and a single screen with a numbered door in the middle. Touch things to interact with them and see if you can solve the puzzle in each room to get the door open. Sometimes you have to touch, sometimes you have to drag, and sometimes you have to do things that would be downright impossible with mouse and keyboard, so keep your mind open. Highlight inventory items by touching them, then use them on-screen; there's no examining or combining items.

DOOORS would be very high on the list of games that showcase the versatility of the iOS platform. Just about everything about it is done right: the puzzles are as clever as anything else we've seen from 58works, the graphics are nice, the audio doesn't get in the way, and there are no control issues anywhere. The game autosaves, so if you've played before just pick "Load Game" and start from any level you've already seen until you've conquered all 50 levels (and possibly more coming, seeing as how the last fifteen were added in the latest update).

Now then... who's up for opening some doors? Or should I say... some DOOORS?

Dooors Walkthrough
(Note: Although this walkthrough assumes you are playing on an iPhone, you may substitute "iPad" or "iPod Touch" as you see fit.)

Dooors Walkthrough
(Note: Although this walkthrough assumes you are playing on an iPhone, you may substitute "iPad" or "iPod Touch" as you see fit.)

My favorite thing about this game is the sound when you go through a door.

I wish they'd make more levels or a sequel.

@haikiba: I think there is a chance that they will make more levels - I got the game two months ago and then it had only about 25 levels. Since then it has grown and hopefully will continue to do so! :-)

Looks nice, but nothing on earth could make me install iTunes on my machine... and from the number of votes and comments, it looks like I'm not the only one!

[This game does not run on your computer in iTunes. In fact, iTunes isn't needed for it at all. You do, however, need an iOS device (iPhone, iPad, or iPod Touch) to play it. -Jay]

UPDATE: Dooors has been updated with 15 more levels, for a total of 50 as of today. I have added those levels to the walkthrough.

UPDATE: Dooors has been updated (again) with 10 more levels, for a total of 60 as of today. I have added those levels to the walkthrough as well.

Just wanted to mention that this game is now on the android "Google Play" store :)

UPDATE: Dooors has been updated with levels 61 through 75, and so has my walkthrough!

level 16 does not work on Android.

How long does my tablet have to be "face down" for the door to open??? I have tried everything from a second to a minute. But the door does not open.

Oh wow! The red bar does turn green after I

lay my tablet down for a minute or two - BUT as soon as I turn it over the bar turns red again. I had to hold it face down and tap the door for it to open.

level 19 may be another android issue.

3 doors, the left and right slide up, tap the button - it turns green, get the orange ball, slide the left and right doors all the way down, now there is only the middle light above the middle door that is red. Now just throw the orange ball at the middle red light and the door is supposed to open. How do you throw "an object" with a tablet??? I have the ball selected in my inventory but tapping the tiny red light while orange thing selected does nothing!

I may be imagining things, but sometimes it seems that games designed for iThings first, don't adapt to droid very well.

made it to door 41. I can set the man's head on fire and he shakes his head to put it out.

this what I am supposed to do with my tablet. unfortunately, no amount of shaking forward and back or left to right - the only red button that turns green is the top left.

I thoroughly enjoyed this. Much more fun than the other 100 floors game I played. I laughed at a few parts and more of the levels felt different than in the other game. The game functioned well, even on a lower grade device, nearly no lagging. Glad to see there are sequels.