You can't even remember if you're guilty of what they say you did. But you were once a hero, and a hero deserves as glorious a death as you can hope for in the cold black of space. The laser prison planet looms large, and so does the never-ending stream of those wishing to break in and out. You will make your last stand an honorable one, in Dramatic Execution, a Unity scifi shooter by Abdullah Konash. 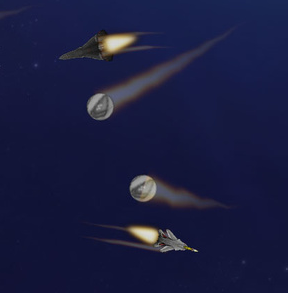 Turn and accelerate your ship with the [arrow] keys, firing with the [spacebar]. You have a fuel gauge, which will replenish itself whenever you cease accelerating, and a health bar which refills when you are not shooting. You will lose health whenever you attempt to leave the force-field of the prison planet, while its gravity will draw you ever closer to it. This, however, will let you pull off some impressive maneuvers. Stay alive for as long as you can. With Spacewar-like physics combined with Asteroids-like rapid-fire shooting, Dramatic Execution should prove a treat for those looking for old-school arcade fun and challenge. Make no mistake: the learning curve is steep and the enemies unforgiving. However, once players get the hang of the tricks of the engine (like shooting backwards while gravity slingshots you around), they're sure to become a true drama-addict.