According to the Diagnostic and Statistical Manual of Video Games (DSM-VG), it's a known fact that gems prefer to mingle in linear clusters of three or more, after which they cease to exist and exert a downward gravitation pull on other gems around them. However, they can't move around on their own, which is where you come in. In Drop Swap, a match-3 puzzle game by Aaron Steed, you mingle around a field of gems using the [arrow] keys. As your shadowy character walks into a gem, you swap places with it. Moving three gems in a row removes them just like any match-3 game, but you have to plan your moves carefully, because you get a limited number of steps to make a match! 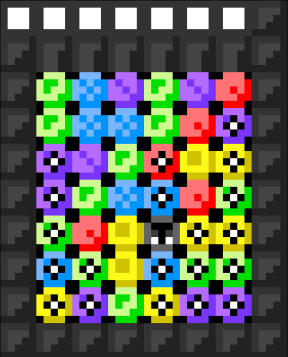 Clearing a match restores your full stock of moves, but running out of steps means you've failed the level and have to press [R] to restart. And unlike most other Puzzlescript games, there's no undo key, so every move matters. In each of Drop Swap's five levels, your goal is to either clear all of the marked gems (with a plus that unfortunately covers their colorblind markings) or drop a number of grey gems to the bottom row. The fourth level introduces skulls that instantly kill you if you're next to three in a row, but can be removed by dropping them to the bottom like a grey gem. Though there are only a handful of levels to play through, just enough concepts are introduced in those levels to make them strangely replayable. Drop Swap is a great example of a simple idea done very well.

This game really badly needs an undo button. The way you move the orbs around by switching places wit them is extremely unintuitive, and having so few moves to work with is really annoying when I have to start entirely over again every time I mess up.

To be clear: I'm not saying that being unintuitive is a bad thing in this case; it's clearly the basis for why this is a puzzle in the first place. The problem is entirely not having an undo button, or enough moves, because I can't really experiment with it and get a feel for how things should move around.

By comparison, the game Lime Rick had behavior that felt a bit strange at first, and misunderstanding them could easily lead to being stuck, unable to move. But that game had an undo button, so if you did that by mistake or just didn't understand the first time around there was plenty of freedom to get a sense of how to actually move around and get anything done.

Huh, interesting. I like the lack of undo. If you could take back bad moves, then you'd never really have to learn how to deal with the unintuitive movement, and you could resort to pure trial and error. This way the player is forced to come up with some coherent strategy, especially on the harder levels.

I think the puzzles are great. I have to say the graphics do my head in though, but it is the same with all of these puzzlescript games. I find the graphics extremely hard to distinguish, which is a shame because they tend to be the type of puzzles I do like very much.

“The fourth level introduces skulls that instantly kill you if you're next to three in a row, […]”

This is what the in-game instruction says, but the condition is not accurate. A skull kills you if you are next to any vanishing skull, not necessarily next to three matching skulls. For example, if you are in the bottom row and move up to swap with a skull, you are killed.

For those who badly need the undo support: you can cheat by modifying the code. Click “hack” at the bottom, remove the line “noundo” (line 8), and click “RUN” at the top.