Dungeon of the Endless

When their ship was attacked, the prisoners were grateful that each cell was also an escape pod. The pods were made to survive any landing and sure enough, the inmates awoke to find themselves buried far underground in what seems like an endless dungeon. Ironic, since they were being sent there to work off their prison sentence. Dungeon of the Endless by AMPLITUDE Studios is a roguelike, strategy sci-fi adventure RPG, with even more elements besides. The goal of the game is to get your team of heroes to find the exit, which leads into the next level. Not as easy as it sounds when you're in a mostly abandoned building filled with monsters. You only have so much "dust", which is converted into power to light the rooms, limited food to heal and upgrade, and also limited industry to build much needed defenses and mods to make more of the needed supplies. It is definitely a game of balance and one that will keep you busy trying to win for a long, long time.

Love to play games? Of course you do. Want to play games and earn sweet rewards doing it? Of course you do, and take that, mom, for saying games never get you anything! Playfire Rewards BETA is a free program that allows you to link your Steam account (get a free mystery game your first time!) and earn cool rewards like store credit through our affiliate partner, Greenman Gaming, just for playing! Check out the F.A.Q. to learn more, or sign up to start earning! 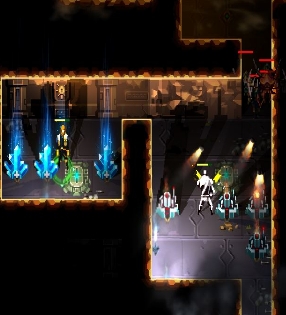 This game is rather complicated to explain. The tutorial only goes so far 'til it tells you there is more to learn and you'll get it all down after dying a few times. There is a lot going on, but it really is a game where you learn best by playing. You start off with two teammates that you can control by moving them around with the mouse... right-click to interact, left-click to move the map, and the mouse wheel to power up or down a room. You can also use the keyboard, though it seems to be much more convoluted to figure out with all sorts of buttons. It can take a bit to get used to, and while it may be hard to adjust to at first, soon you'll be playing without thinking about it... which you'll need, because there is a lot of other things you need to use your brain power on. As I said before, the game is turn-based but slightly different from what we expect from a turn-based game. A turn never really 'ends' so much as a new one starts, which you do by opening a door. This causes a few things to happen. Your mods get the supplies they were built to generate, you have a chance for a random encounter, and every room that is missing power and lacking a hero has the possibility of spawning a wave of destruction-hungry monsters. The more rooms without power, the more waves there are to eat you. In order to have the rooms lit you need dust, which you can find by opening doors or killing monsters. You need 10 dust to power a room, which must connect to another powered room. and in the end, it's rare to have enough to even light up half of the dungeons. That's why you need your heroes armed, upgraded, and ready for whatever batch of creatures this dungeon cooks up next. 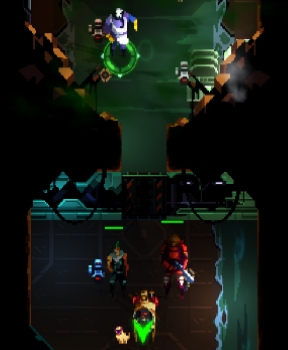 You can find more heroes in your search. Give them food and they will join your quest, as long as you have space for them. There is also a traveling merchant from which you can buy or sell the items you find. While these NPCs are not controllable by you, they are still under the effects of the dungeon. For example, if you're trying to get enough food to add a new face to your group and monsters spawn, the monsters will and can go attack the NPC who can only fight back so much before they are killed. The poor merchants can't even strike back, and if not watched over by you, they will have to close their shop, permanently. If you don't need the merchant and his adorable little pug then perhaps it's best to bid them a final adieu because you have enough on your plate as it is. Monsters don't just go for you, but all your mods and defenses as well. Some just make a beeline for your crystal, and if that's attacked you lose dust. Lost dust equals lost power, which means more darkened rooms to spawn more death bringing creeps. If you're not careful it can be a game changer, er... well, a game ender. So you have to make sure to keep your party spread out enough to watch everyone's back, but not so spread out that their fronts are overwhelmed. If things didn't seem hard enough, when you find the exit you have to bring the crystal to it, but once your crystal is picked up, all unopened doors open and the monsters pour out to hunt your party down. And the cherry on top is the crystal is so heavy whichever hero is holding it is slowed down greatly. It's best to plan what rooms should have power and who should be doing the slow running. Make sure everyone is in the elevator though, because while your supplies carry over, if a hero doesn't catch the lift with the rest, they are left behind. 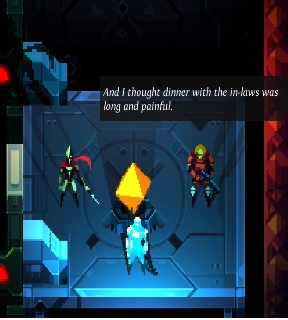 Analysis: Is your head spinning yet? I don't blame you... it can be rather overwhelming to understand even with the tutorial. The best way to learn this is to get your hands dirty, which really shouldn't be a negative against the game. There is so much to enjoy that it is going to take a little bit to learn. This game works on so many levels and it's hard to get bored with it since you have so many things to watch. It's not just a "build-your-team-the-strongest" game, and it's not just a "build-towers-in-the-right-spot" game, but a beautiful blend of the two with even more to add flavor. Even I'm still learning new things after days of play. There is even a multiplayer option, and even though it's the same game, things are greatly changed when you add other people into the mix. With every map randomly generated and new pods to unlock which add new rules, Dungeon of the Endless won't be getting old any time soon.

Besides the wonderfully mastered gameplay, the art of the game has to be admired. Even with the retro looks, every character has their own way of moving and fighting style and they all move fluidly. There are details in each room making you really feel like you're stuck down there with them. The only thing that pulls you out of this rather dark, macabre atmosphere is the light and witty humor. Every hero has their own personality, fleshed out with intriguing backgrounds that you can only discover when you pair the right ones up. They will converse in the elevator, giving you a glimpse at their past and helping you piece together what is really going on. Looking at the album, you will be able to see wonderful artwork of the characters as well as see the handwritten notes from a mysterious someone who drops even more hints to the plot of the game. Even if the story doesn't interest you, Dungeon of the Endless is still a complete package with days upon days of entertainment. It's worth every dime and once you get out into the fresh air of the planet, you'll want to dive right back down and start your ascent again.

I love this game, it's really great.

However, it's worth noting that there have been some crash issues and multiplayer connectivity issues. The devs have said that they're working on it, so it should be fixed soon.