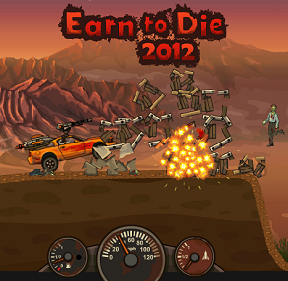 At the end of the original Earn to Die, our hero had thought he was off on his way to salvation. Unfortunately, it seems he forgot to check his gas gauge and there are still zombies in his way. On the bright side, he has a whole new fleet of vehicles to customize and a whole mess of undead out there to introduce to his tire treads. Earn to Die 2012 is an update to Toffee Games arcade-style hit, and has all the post-apocalyptic stunt action you could hope for, without the danger of infected bites.

Gameplay is simplicity itself with the [arrow] keys: driving your vehicle, pressing up to accelerate, down to brake, and left/right to tilt yourself, try to get as far as you can through each of the various levels, plowing through obstacles and zombies alike. The further you get and the more undead you squash, the more cash you will earn. This cash will then be spent on buying new vehicles and upgrades at the garage between levels. Undoubtedly the main purpose of Earn To Die 2012 is to better align the browser version of the game with the features found in the enhanced mobile version. This should be appreciated by those who, like our reviewer, haven't yet bothered to switch from the hilariously tiny Pantech C300 you got back in 2005. That means new levels, new enemies, and new vehicles, though, of course, not as much as the cool kids have on their phones and iPads. But hey, one can't begrudge game developers the need to eat and, in any case, Earn to Die 2012 undeniably brings the crate-crunching, zombie-smushing enjoyment of the original.

Felt a little shorter then it should be compare to the first game but I guess they saved all of the good stuff for mobile version. The browser version was fun, don't get me wrong but it is pretty much the same size as the first. So less of an improvement and more of a clone/remake if anything. The improved GUI and the new bumper weapon does make it better then the first so I guess that would be worth saying.

I understand they need to eat and get pay for their great games but you can really tell that the browser version took a heavy hit because of it, that all I am trying to say.

Not bad. Shame it's basically just a demo for the phone version. Maybe they'll try Greenlight on Steam someday so that us non-Apple types can actually play the whole thing.

Played this elsewhere the other day and it gets the same partial-rating-for-a-partial-experience from me here.

I wanted to like this a lot, but it quickly became evident that the browser version was just an ad for an iOS game that I'll never be able to play until/unless it's ported to Android.

1,612 Views
0 Comments
chrpa— Jayisgames needs your help to continue providing quality content. Click for details Welcome to Weekday Puzzle! In Neonesque's puzzler you are supposed to find your way out from abandoned labs and reveal its secrets (and not let yourself discouraged...  ...

1,477 Views
2 Comments
chrpa— Jayisgames needs your help to continue providing quality content. Click for details Hello, it's Wednesday again and the new Weekday Escape here! We start with tomoLaSiDo's escape - it's a bit shorter but as cunning as usual. Then you...  ...

1,245 Views
0 Comments
chrpa— Jayisgames needs your help to continue providing quality content. Click for details Welcome to Mobile Monday! We've got a new Nicolet's game and it's a joy to play it - so update their app in your mobile or install...  ...

4,830 Views
0 Comments
chrpa— Jayisgames needs your help to continue providing quality content. Click for details Welcome to the Roundup 41 with three games! As mentioned in the previous roundups, only odd-numbered episodes are featured since even-numbered are for Robin Vencel's patrons. More...  ...