In Earth Taken 2, Seething Swarm's action-platforming sequel, aliens have turned our planet into a foggy, noxious, post-apocalyptic wasteland, the government seems to be doing something ambiguously sinister, and you are a survivor, trying desperately to shoot through the hordes to some kind of safety... just like the original game. The more things change, the more they stay the same, huh? Move with the [arrow] keys and jump/double jump with [S] making your way to the objective or safe-house at the end of each level. Vehicles, exploding barrels, and other shootables like enemies can be taken care of by firing your gun or using your melee with [A], reloading when necessary with [R]. [Spacebar] enters doors, loots dead bodies, and interact with other characters. Supplies can be collected, including health-packs which can be traded in at outposts for upgrades, weapons, and ammo, or consumed with [E] for a quick recharge. The air in the environment is toxic, so make sure you have enough gas mask filters on hand to avoid the hit to your health. Take too much of the irradiated black rain, and you'll die, so use [X] to keep your levels steady using radiation pills on corpses. Found survivors will join you as allies, and will be quite useful in a fight. 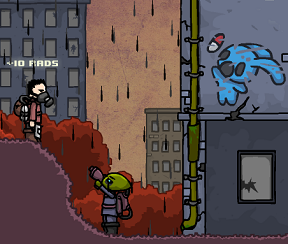 Jocularity aside, Earth Taken 2, while cloning many elements of the original, also refines them and, while not a remake, ends up sort of being the game the original could and should have been. The survival horror elements are emphasized, making the gameplay a lot more focused. The world of Earth Taken 2, isn't dark, but it's frightening all the same, and gives a good balance of claustrophobic and agoraphobic terrors There are also a few more control schemes to choose from, and though far from the ideal of full remapability, they are well appreciated. So even if Earth Taken 2 is a bit of an "Earth Taken 1.5", it's the best Earth Taken 1.5 it could be, and should be appreciated by platformer fans looking for some sci-fi with a side of subtle scares.

A lot more challenging platforming, and the slight lag is starting to get me. Not being able to grab the "dogs" while on the ladder was a bit of a curveball. Looking for the secret areas is still fun. Narrative still nicely perilous!

I keep dying on lvl 11, at the top of the first ladder, and I can't figure out why.

DAM, probably you're getting radiation poisoning. Keep pressing the 'x' button from time to time to clear yourself of radiation.
The only place not radiated in that level is the mothership.

As for the game itself, it's quite fun, but... it just bores after beating it. The design, when it regards equipment is logic, but it aches, because you're forced to replay previous levels in order to get certain upgrades, that later fall under the following moot point.

The weapon choices are also vague. A knife can cut through everything, given enough time. A shotgun can with at most two shots kill everything and when upgraded kills everything in one shot. The variety of enemies and their AI are also downs. And also it seems pointless to add between every level an HQ just to refill on stuff, thus making the actual number of levels where you do something other than loaf around around 5 or 6.

But the simplicity of the graphics, the references to Acid Bunny, the storyline and good ol'fashioned alien fighting makes the game for me.

I thought this one was easier than the first. I still enjoyed it though. The addition of the knife and the option of sneak attacks with it was fun.

Ok, game isn't loading for me. I'm using Chrome. It did load up the first couple times I played it but now after the ad all that comes up is a blank white screen.

Really nice game but the controls are a bit of a grind. Whats wrong with mouse aim and up for jump?