Emberwind is an adventure-themed platform game from indie dev TimeTrap. The city of Grendale has been overrun by gremlins commanded by the evil CandleFinger. As the short, stout gnome Kindle Elderwood, it's your job to comb through the villages and dispatch the evil little buggers from every nook and cranny. Along the way you'll get to learn new abilities and collect a whole lot of loot! 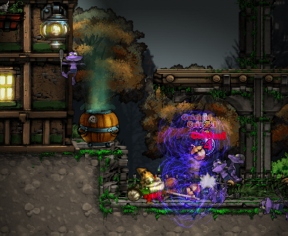 When you boil it down, Emberwind is really about three things: exploration, platforming, and combat. Oh, and collecting stuff. Four things. Kindle carries a nice little staff he uses to smack gremlins that come nearby. Soon, you unlock new combat abilities like a swirling attack, a rolling attack, and a rapid-fire hit that really does some damage. Kindle also has some defensive and movement tricks up his stubby sleeve, like a rocket jump, a dash, and a duck-and-hide ability that uses his pointy little hat. Pretty resourceful gnome, isn't he?

Level design is pretty open-ended and allows for exploration both above and below ground. Each sidescrolling stage is filled with secret passageways, tunnels, suspicious platforms hovering just above your jumping range, and so much more. All you have to do in each level is restore light to every house, but you won't want to leave until you feel like you've poked your nose in every hiding space the level has to offer.

And as for the collecting part of the game, you've got plenty of stuff to find: coins, acorn-like things, diamonds, more coins, and brownies (not the kind you eat, obviously). Most of the former are used mainly for scoring purposes, but the brownies are handy little guys that give you special attack abilities. One imbibes your staff with the power to stun enemies, while another shoots fire! Finding and using brownies is a lot of fun and makes combat in Emberwind thoroughly enjoyable. 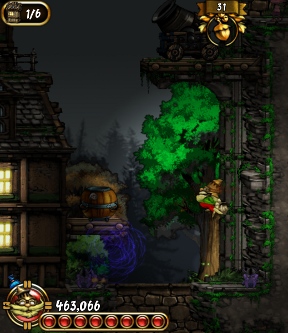 Analysis: It's an unassuming game on many fronts, but Emberwind delivers where few games of its kind do. For starters, platformers generally encourage you to avoid enemies, as one touch sends you packing. Here, though, it's not only beneficial to hop down and attack them, it's required and it's fun! Emberwind also offers a slight non-linear flavor to its gameplay, even though from level to level you're on a straight path to the end.

The music and visual presentation in this game are both spectacular. Some of the artwork comes across as slightly grainy on an HD monitor, but the attention to color and shape makes each location overflowing with personality. There isn't too much variety in the settings, but when they look and sound this good, you really don't care.

If Emberwind has anything holding it back from perfection, it's that the game gets a little repetitive after a few hours. All of your abilities will be unlocked, and you'll pretty much just go from level to level gathering gems and bringing light to houses. Boss battles switch things up a bit, and if you take a casual approach to playing the game, you'll never suffer burnout.

Emberwind is simple on the surface but has a wealth of entertainment buried just below. The level design is absolutely enjoyable, the difficulty is just right, and the strong dose of enchantment, exploration and combat is the perfect antidote for starved platforming fans.

In the trailer at the site there's a scene where the gnome say "orly".

Anyone know how to get to the secret underwater cave complex on the Boulderhood Lake level? I tried dropping in from the lake but no matter what I do it won't let me land on the small ledge to the right.

Can someone tell me where all the fire sprites (forgot what they're called) and skill books are?
And yes, over a long period of time and many levels, this game does get a bit repetitive.

The maps for all levels can be found here:
http://www.timetrap.se/emberwind/atlas.php

Thanks for the link PorkRoll. But, I see no way on how to get the sprite at Marlon's Market (now that I see where it is).

I haven't gotten there so I can't help you out yet. But I think that some areas of the full game are blocked off in the demo. The entrance to that underwater part that I asked about appears different in the demo than in the full game.