Aaron Steed's Ending is the sort of puzzle game that sucks you in with its quiet, elegant simplicity. Using [WASD] or the [arrow] keys, you guide your symbol through levels one turn at a time. When you move, so too do the enemies that will destroy you with a whack when given a chance, so gameplay becomes about careful strategy to lure enemies in to destroy them by running into them before they can do the same to you on your way to the exit, all without using all 48 available moves. You can even choose the second icon from the main screen to play a randomly generated enormous gauntlet. 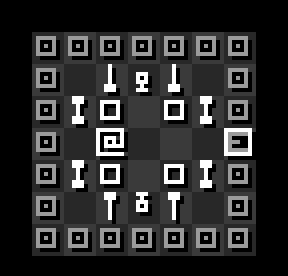 Easy, right? But as you go on, the levels become more intricate, more tightly designed, with enemies laid out over the map like sharks circling ever closer. With the game's minimalist approach to design and sound, it creates a sort of subtle, hypnotic experience that forces you to learn the rules of each new obstacle without words, as well as how to manipulate it to get by. Suddenly those 48 moves don't seem quite so generous, and the game winds up being much more difficult than you thought. Ending is a game that forces you to think ahead and plan, and is simple but brilliant concept and well thought out design makes it one of those puzzle games that can challenge your brain with the best of them.

Thanks to KMB, Adam, and Sean for sending this one in!

It does seem that you gain moves by destroying an enemy.

...She says, right before getting stuck on level 9.

To finish a level, you only need to get to the exit, there's no need to destroy things if they aren't in your way.

Here is the first half. They are broken into groups of three moves for ease of verification over a choppy Skype connection. Many thanks to my kid for being a tireless amanuensis while I kept muttering things like "okay i remember solving this one but HOW?". We will try to finish up the last half tomorrow, or perhaps this weekend.

A warning to future coffee break gamers: this game will destroy your work day.

Here are some more solutions. Note that unlike deaken.wylie, I simply use WASD instead of NWSE. Also, similarly to deaken.wylie's, some are quite suboptimal.
30-42:

As a bonus (or rather, an apology for not solving the rest yet), here's a shorter 29:

Found a secret which helps a lot to complete the levels (not by skipping levels):

You can press shift while on level to display "deadly" squares.

Ville Heikkinen:
Pressing control also works, BTW.
Keep in mind that this highlights the squares that are not deadly, but rather "under attack". When dealing with moving walls, sometimes you have to move into one of them to get pushed by such a wall onto a desired square.

I wonder why this feature isn't mentioned anywhere in the review or the game...

Um, hitting the blue triangle in the upper right brings up a small menu. The plus one toggles between showing the "deadly squares" or not.The bottom right is full screen,and the rest you can probably figure out.

Danwareld: "[S]uboptimal"? That's way more politely than I would have described some of my solutions. My 21 is... shameful. I guess I'll let more efficient folks try to finish up (while I go back to fighting with https://jayisgames.com/archives/2013/02/dungeondiary.php ), and take another swing at it if they aren't solved by the end of the weekend.

There's an ad running - The Internship film promo - it breaks the page and renders the game unplayable. We've had the same ad breaking pages at Nitrome. Not happy with those guys running that ad.

Oh. And you didn't mention the level editor or the free desktop versions :P

deaken.wylie:
Your 21 is beautiful compared to mine:

Note a lot of copypasta! I went as far as implementing a record/replay feature using AutoHotKey just for this level.

I should've really checked my "solutions" before posting them. Apparently, I made a bunch of mistakes. Specifically, 30, 36 and 37:

And then, of course, there's the labyrinth mode. I've only managed to get past 3 gates before getting killed by a random enemy. Also, if you spot any enemies / ally blocks tinged with black, it means they can explode.

This can be both good and bad, as I've found out far too often.

Great game. The only thing I don't really understand is when exploding blocks kill you and when they don't... sometimes feels a bit random. While I like the exploratory nature as you meet new enemies, it'd be nice to understand the underlying principles...

eamurdock, they seem to explode in all adjacent squares except the one that deals damage to them. When they are next to each other they trigger a chain reaction. The safe way of disposing them is to make sure no two exploding pieces are touching you and connected.

Has anyone solved level 49? It's the only one I can't get, and it's driving me crazy.

Despite my cons outnumbering my pros, most of them are just quibbles, and I would definitely recommend picking it up.

Wow. I swear those various app store badges weren't there before I posted. I guess I was right about losing my mind... Sheesh.

Hey, has anyone solved the maze level yet? I've gotten within single-digit moves of hitting the last "gate" a handful of times, but that's it.

Talk about replayability, by the way . . . love this game.

How do you do Level 57??? I have been able to do every single one except that one. Please help :)

5,180 Views
7 Comments
chrpa— Jayisgames needs your help to continue providing quality content. Click for details Hello, it's Wednesday again and a new Weekday Escape here! We still have halloweenish games - some devs are a bit late, as every year, and so...  ...

3,066 Views
1 Comment
chrpa— Jayisgames needs your help to continue providing quality content. Click for details Welcome to Mobile Monday! After a few months, a new lovely Nicolet's game is out and you can return to their cute rodents' world. With APARTMENT BACON...  ...

5,888 Views
10 Comments
chrpa— Jayisgames needs your help to continue providing quality content. Click for details The beautiful warderobe bought cheaply at the local market had one flaw - the seller didn't have the key. But then a miracle happened - after river fishing,...  ...

The Slimekings Towers Review: So Much Fun