Enlightenus II: The Timeless Tower, a sequel to the original Enlightenus, is an utterly intriguing adventure game. Calling it a hidden object title is not only inaccurate, it doesn't do the game's style justice. Think of it as a modern-day casual Myst, complete with hidden worlds warped by magic, puzzles that require toting inventory items around, and mini-games worth their weight in pixels. Enlightenus II is exactly the kind of game any casual adventure (or even hidden object) fan is craving. 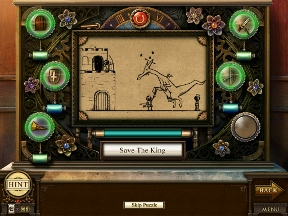 As a reporter, you relish in discovering new stories and bringing them to the world. One day, an aging clockmaker named Clarence Flatt contacts you with an interesting offer. He promises you the story of a lifetime if you'll help him finish his invention, the Ageless Clock. He's too old to complete the work himself, but with your investigation skills, you won't have any problems. Soon, you discover the clock has actually created pockets of warped time and space, allowing you to travel to medieval England, the ancient Mayan lands, and other places in history. Sounds like a good start to an adventure to me!

Enlightenus II is a "found object" game. Half of the time you'll be working with inventory items to open new areas to explore inside the tower. The other half is spent inside the clock worlds putting items back where they belong. You have something called "bird armor" in your inventory, for example. Click it, then move your cursor around the scene to see descriptions of things there. When you find something that looks like it could use some bird armor (a "warrior bird", perhaps?), click it and the item is put back where it belongs. Some of the puzzles here are a bit obtuse, requiring more than a small leap of logic, but the generous hint system more than makes up for that unintentional difficulty.

There's a surprising amount of exploration to be had in Enlightenus II. The still found-object scenes are only one part of the game. The rest of the time, you're free to roam the halls of the Timeless Tower, probing its mysterious halls for secrets. After completing a clock world, you'll uncover a token that can be placed in the clock. These provide a means to move on to the next level of the tower and help you complete Clarence's strange invention. 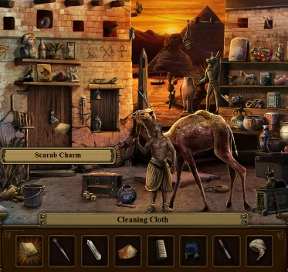 And now for the mini-games. The glorious, glorious mini-games. In a brilliant stroke of casual gaming genius, Blue Tea Games has included several short, playful games that will remind you of the Grow or Hapland series of browser games. Each one has an objective listed at the bottom of the picture, "Don't get electrocuted", for example. There are several icons surrounding the sketch that, when clicked, will cause something to happen in the picture. Depending on the order you choose, the scene will play out in different ways. Experiment with the order and see if you can get things right. Simple, playful, and skippable if you happen to get frustrated (but you won't), they would almost steal the show if the rest of the game weren't so well-crafted!

Analysis: Once you start playing Enlightenus II: The Timeless Tower, you won't be able to stop. It's that good. The step away from traditional hidden object gaming would be enough to get my attention, but the level of intrigue painted by the story, the setting, the artwork and the music has this wonderful ability to draw you in. The puzzles are generally pretty simple, but there's just enough challenge there to make you motivated to win.

Most players will bump into the sometimes awkward solutions to the "found object" puzzles. Early on, for example, I thought a "snake eye gem" would be a perfect fit for the "eyeless shield". Makes some sense, right? Unfortunately the game didn't want it there, leaving me a bit clueless. After a little investigation, it turns out the tiny "eyeless snake statue" was where it belonged. It's nothing a bit of searching won't solve, and you've always got an ample amount of hints to nudge you along when you need it.

Enlightenus II: The Timeless Tower is great, that's all I have left to say. The structure of the game is superb, the puzzles are interesting, the mini-games are glorious, and the whole experience is something you won't want to miss.

A Collector's Edition is also available. It contains a bonus quest, achievements, an MP3 soundtrack, a sneak peak at Enlightenus III, and a free copy of Forgotten Riddles: Mayan Princess. Not bad at all! Remember that Big Fish Game Club Members pay only $13.99 for Collector's Editions (or 2 club credits), and collector's editions count 3 card punches of 6 total needed for a free game.

Looks like a fantastic game, just my kind of play. Should I play the first before going for this game? Or does this one stand alone pretty well?

You'll get some of the little references throughout the game, but really you don't need to know anything about the first Enlightenus to play the sequel.

What a treat this game was. Gorgeous design, rooms with Art Noveau decoration... how lovely. And the "found object" aspect is a welcome change to those who are a little tired of "hidden object" games that devolve into just clicking all areas of the screen in frustration. Plus it's easier on the eyes!

Played it though. Decided I didn't care for it.

Sure the "Found Object" idea is novel but moving said object around the screen trying to find some arcane reason to fit it somewhere gets tiresome right quick-like. You can't just look for things - you have to actually hover over EVERYthing searching for where it belongs. As mentioned in the review the matching of things doesn't always make sense.

Graphics were good, story was somewhat intriguing, music was perfect for the story, minigames were a brief distraction (with the exception of one ridiculously hard one) but the overall experience was rather blah.

I won't be playing any more "Found Object" games.

Wow. I normally rely on you guys but I'm sorry I did in this case. Enlightenus II is great, huh?

For the most part, I agree that the game and the visuals are charming enough to make up for the badly-written "narrative". But *nothing* would justify the deeply creepy misogyny of the end. It boils down to "women shouldn't have careers". No way this game would have been made with a male Reporter, not with that ending.

I feel dirty for having given them money for that. And I'm disappointed that you didn't mention it.

Re: misogynistic game elements...oh no! Don't tell me we have to go back to consciousness-raising...Thanks for the warning. Whaddup, Jay? I thought you were more 'aware'.

[We are well aware of what misogyny is. And while everyone is entitled to their opinion, ours is that this game does not have misogynistic elements. -Jay]

Wow, I don't think I played the same game Shweta there did...