Enlightenus is Latin for — wait, no it isn't! Actually, Enlightenus, from Forgotten Riddles creator Blue Tea Games, is a story-driven hidden object adventure game made backwards. Instead of looking for and collecting a list of items in cluttered rooms, your job is to find where items belong and put them back. Compare your inventory with the objects on the screen and decipher which items go in which location. It's a simple gameplay switcheroo that shoves Enlightenus away from the pack and into the spotlight. 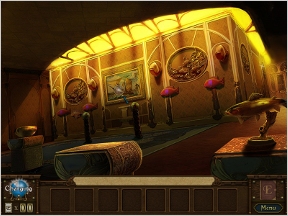 You are Inspector Doubleleaf, a famous detective called by novelist Edgar Lee to unravel an intriguing mystery. The author has a machine that can transport him to different worlds, a trick he uses to find inspiration for his novels (cheater). An energy surge threw everything out of whack, however, scrambling his stories and hiding the pages of his novels in an alternate version of his mansion. And now it's your job to put everything back together.

The introduction eases you into this uniquely constructed game, and subsequent chapters expand on the concept in measured increments. As you explore each room of the mansion you'll come across pages of Edgar's novel. Each page is a hidden object scene (well, the opposite of that, but you get my drift) that, when completed, gives you buttons that are used to complete puzzles elsewhere in the mansion. It all weaves together into a fantastic plot that feels like a cross between Myst and Harry Potter.

Putting objects in their place is much more of a brain trick than you might think. Your only clues are the names of inventory items and short labels found around the scene. For example, an item might be labeled "hostage cow" and a UFO floating in the background might be casting a "bovine beam" to the ground. See how that works itself out? Some objects have to be used before you can uncover uses for other items. Can't very well see the bovine beam if the barn door is shut, can you? A hint system serves as a gentle nudge, but don't rely on it too much. Completing found object scenes will require some actual thought and light riddle solving, something many hidden object gamers aren't used to. 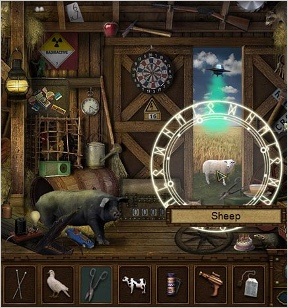 Analysis: Enlightenus isn't a comedic game, but I couldn't help but grin at its premise. I mean, here I am putting found objects back where they belong, almost like I'm cleaning up after some hidden object gamer played the very same stage! Besides the twist on the genre, Enlightenus also has a distinct Azada or Dream Chronicles feel, and you really can't go wrong if you follow in those footsteps.

If I were to choose one area Enlightenus needs improvement, I would have to say accessibility. Despite its reverse mechanics and adventure game leanings, this game falls into the hidden object genre. Hidden object games tend to be straightforward. From exploring environments to finding items in a scene, everything takes place on a nice and neat track. Enlightenus encourages you to move around and explore, solve puzzles in your own order, and unravel a number of riddles. This non-linearity will frighten a small set of casual gamers away, though, in truth, it shouldn't. Perhaps its a fault of our genre labeling habit, as I don't feel Enlightenus got anything "wrong" in its design.

Enlightenus is a beautiful and inspired game, from its story to presentation to the scattering of apropos mini-games. You'll love the atmosphere, you'll adore the adventure sensibilities, and after you get accustomed to it, you'll love putting objects back where they belong.

Journey to the Ancient Parthenon

This game is fun. Its navigation is similar to Return To Ravenhurst and architecture design similar to Flux Family. I liked the twist of putting things back.

I need help! I did ravenhurst and had no trouble. I'm stuck on this one. I got the first painting accomplished. Now I'm stuck with a gear and cant get it into the place it goes and the owl needs an eye, but I can't find anything else to do? Help!

go into the aquatic museum, go int the back of the museum, put the gear in the antique machinery

iluvdrafters:
owl eye: solve the picture in the attic

I cant solve it because I have enough buttons to get into it. I have the BAIT and the HOOK for the fish one. I have a saw, bullet, binoculars and a piece of log? Any help appreciated. So frustrated! I didnt have this trouble with Ravenhurst. I have gone to every room and cant seem to make anything else happen.

How many buttons do you have total?

You need to solve the picture in the aquatic museum:

Left side, bait, hook. Right side, wood, saw. The picture will raise up and you will find a teacup emblem. Take it. Go back to the potions shop. On the display wall behind the counter is a teacup shaped slot (lower right of the display, just above the counter). Put the teacup emblem there and a secret panel in the display slides open. In the panel is another novel page to solve and a red gem which is the missing eye of the owl.

I am so stuck...I can not get all the fruits for Jill. I solved Jack and got the saphire and put it the mechanism thingy, but IU still can't get anything else done. Please help

I have just the ones I mentioned. What do I have for the aquatic besides the Bait and the hook. I have the binoculars, bullet, saw and piece of log.

Did you play the match minigames at the base of the Jack and Jill statues?

Check under the spoiler in my previous post, it tells you what buttons you need to solve the picture and what to do from there.

Thank you so much! I'll go try the helps you gave me :)

Super! Thank you grinnyp! You helped me so much! I was STUCK! All fixed up now! Thanks!

for the "skillful" guy,

there are a total of six places for buttons, which doesn't match the spoiler'd answer above.

(hoping i'm not giving too much away)
salome

[Edit: No worries, salome. I added spoilers for you :) ~ Greetings, Kayleigh]

The question I was answering was about the "fishing" guy, which only had places for 4 buttons.

Also, when you are in the underground garden, did you:

Turn around and play the two novel scenes by the no longer functional floral elevator?

Does anybody else have problems with the screen freezing during play? I have to quit in the middle of play and reboot. Luckily when I go back I can pick up where I left off with not having to restart a level or a page. I've run Spybot, C-cleaner, AdAware, defragged, and checked Space Monger but no luck. My Java is up to date. This has not happened on any other games that I have played. All of my large file games are on a different drive.

[Edit: Maureen, please contact Big Fish customer support and make them aware of your issue: http://bigfishgames.custhelp.com/app/ask ...they may have an answer for you. -Jay]

I finished the game, or so I thought. I am in the secret room and have a key left but I don't know where to use it.

Go back to the entryway (where the suit of armor is) and turn around to look at the locked door (where you pulled out the nail in chapter 1). Use the key on the door and the game is over.

In the secret room there was a painting of a man with a cactus "person". It needed five buttons. I used the key to open two locked "E" doors, but then I used it on the final door and the game ended. I think there are three doors for the key, but couldn't find the door again. I imagine the buttons are to be found in there. It seems every way is blocked and I can't find the door where I am allowed to go. If there is another door and or a way to find the five buttons, how do I do it, or is this the way it is supposed to end?

As far as I know that's how the game is supposed to end.

Journey to the Ancient Parthenon

I've ended up at the same point as grinnyp. JIGUEST states he/she thinks that's where the game ends. It seems rather unjust that there are five discs areas that need to be filled and there is no indication that this would not be so. I figured this must be the final challenge....but, there is no obvious E-key slot left to access. I hope the creators give us a hint.

I also believe there must be more. Why leave a space for discs if they dont need to be filled. Also once you use an item to its full potential it disappears. So why leave us with the key??!!??

I checked over with Big Fish and they said that there are no buttons to fill that picture. It exists to let us know there will be a sequel.

Can you go back to previous chapters? I think I missed some things

Help! I finished the hunter picture and the fishing picture and have the owl eye, etc. Where do I find the gear for the elevator!?

The gear is in the antique shop, on a shelf to the left of the lamp. Here's a screenshot.

No, once you are through a chapter you cannot go back. However, you cannot move on to the next chapter unless you've finished the one you are in, so I don't think you've missed anything.

I can't find the bullet or the emblem. Can you help?

Which chapter are you in?

How far did you get in the hour free download? It took me several hours to get through the game, although I was going slow and writing the walkthrough as I went.

The end is the end. The Secret room is just a a pat on the back for the games designer(s) by the game designer(s).