You've come a long long way, baby, and kupo707's wildly popular tongue-in-cheek RPG series is finally back for more in Epic Battle Fantasy 4. After the events of the last game, our heroes have sort of turned into... jerks. Believing that saving the world means they basically have a right to anything in it, they've wandered about the land taking whatever they feel like from people, which... goes over about as well as you'd expect. Meanwhile, in a totally unrelated set of circumstances, young forest dweller Anna is shocked and upset to find her people's priceless, important gem has been stolen and sets out to discover who could have done such a thing. You see where this is going, right? But are our former heroes really to blame? Packed with more challenging battles that require real strategy, a gorgeously polished design, and one weird adventure with the signature risque cheek and goofy charm you've come to expect, this is the series biggest and beefiest offering to date. 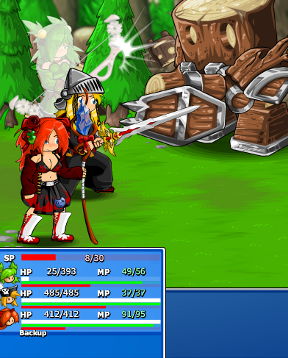 Everything in the game can be controlled with the mouse, clicking to move, select, and interact, or you can enable old fashioned keyboard controls under the options. On the main map, you can wander around freely, chatting with characters to gain information or quests, and of course continue the time-honoured tradition of rooting through other people's personal belongings for treasure. You can see enemies on the map, and interacting with them will initiate battle, which is turn-based, so take your time and think out your strategies. Like any RPG, leveling up and buying better equipment is important, but will only get you so far. Epic Battle Fantasy 4 wants you to pay attention to a variety of factors, like specific strengths and weaknesses, turning battles into more strategic affairs than you might expect. Since you can save manually outside of fights whenever you like, you'll want to take advantage of that. As you take down enemies, you'll also gain ingredients you can use to upgrade your characters' arms and armor by clicking the "Forge" icon, so keep an eye on your supplies! Each battle earns you Ability Points your characters share as a pool that you can spend on upgrading each person's abilities and spells, or learning new ones too. 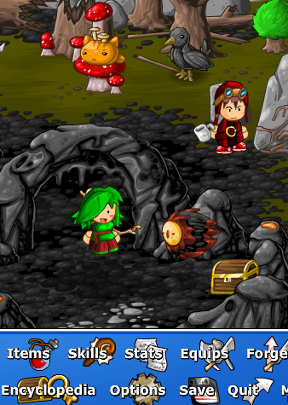 Though still definitely a bit immature in places, Epic Battle Fantasy 4 is... somewhat more restrained than its predecessors. It leans more towards depth of combat than depth of story, and fans of strategy over grinding will relish the amount of factors that can come into play to make an impossible fight merely a difficult one. It's not drastically different from the older games visually, but gosh it's all shiny and polished! Epic Battle Fantasy 4 is one of those games where you can really feel all the effort that's gone into it, even if you haven't played the other titles, and the result is a game that sets a high standard for Flash titles. While you can play the entire game for free, there is an optional pack available for purchase with real cash (around $10.00USD) that not only adds additional items and skills but unlocks new quests available in "New Game Plus" mode. If you don't like cheesecake, some immature humour, or RPGs that put their focus more on combat than anything else, you might want to take this one with a grain of salt. For fans, however, and players looking for something rich in colour and quirk with more strategy than you typically expect from a turn-based RPG, this is one great treat. Kupo707 is a developer with talent and passion to burn, and Epic Battle Fantasy 4 is weirder and wonderful-er than ever before.

I found this 5 days ago, and I think I'm a little past halfway through (I just beat the third boss, and now I'm going to finish the optional area before heading for the third city). It seems to be a bit easier than EBF3, or maybe that's just because I'm already familiar with the mechanics, but I'm playing on Epic difficulty and it's merely challenging.

Keep a list of what you need for quests, so you don't accidentally use rare items for upgrades (silk is especially hard to find early in the game).

Assign specials so each ally has as many different options as possible for attack elements and support spells.

When you reach a boss, teleport back to the starting village and re-clear all the places you've visited so far. This should refill the limit break bars and give you enough extra skill points and items for upgrades to make the boss manageable, even on epic.

How do you open the secret doors in the waste disposal plant? There is a list of numbered switches, but I cannot seem to turn them all on or all off without getting stuck in a room.

Scotty - you can't do it until fairly late in the game, after reaching the desert area. Just south of the Temple of Godcat entrance is a door (and switch 10), which lets you back in to the correct area. Use that, the entrance from crystal caverns, and the doors in Whitefall town (you have to re-open one with one of the batteries you were using inside the factory), and you should be able to get to all the areas you need to get just the right switches flipped.

Hey, i have trouble reaching the boss rafflesia, please help!

Thanks Vinca, but how do you get switch II on? It boxes you in and you cannot leave.

hey scotty, if you have the hammer, you can break the stone and there is a tile hidden behind the left barrel you can walk on to get by, i forgot it was there a bunch of times and thought i was stuck haha

Can someone help me out?

I can't seem to find the second chocolate cornet for a Stephenie's quest. I know there was one in the market, but I used that for another cpu's quest.

Also can someone tell me what the creature between a big muddy bush and a dark bush is and where to find it? It's the only creature I'm missing.

i need to get the ladder. i am desperatly stuck in deep crap. plz tell me how. ;] also, how do u get in the desert place properly?

I need a copper/brass key. I must have missed one. Where are all of them?

I wen through that frustration as well. You cannot get to the last switch until you are way past the jungle.

that would be a red bush, it looks like dried leaves.

if you are not to the desert then you will not have a ladder yet. You need to go through the jungle in the upper left first, then the cave, then more jungle, then you will find it on the beach/desert

There are several pieces of ladder

For future reference if you want help you need to be more specific as to where you are at in the game and what you need. IF you just say you need a key, that doesn't mean much, you could be

and I could be giving you advice to find something in an are you have not even been to yet.

I take that back you only need one ladder, I had just received it and not used it when I wrote the comment. You can find it a bit after you get to the ocean.