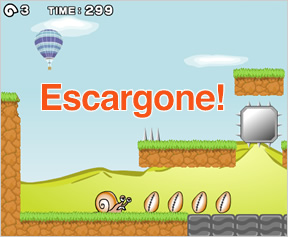 Before we begin the review proper, a bit about me (and not for the sake of my ego): I have a physical disability that impairs my hand function. Therefore, I aim in my intermittent contributions here to represent the interests of the disabled gamer by reviewing casual games for their accessibility as well as their other qualities.

From the vault of SKT Products, creators of simple oddities such as the Moai games and the recently reviewed Mr. Sweets, we're dusting off one-switch game Escargone. The story is in Japanese, but thanks to the efforts of a few of our readers, I can provide a synopsis: You are Gone, the snail servant of a Moai on a UFO. The Moai wants to buy booze and a new golf club, but he's strapped for cash, so he's sent you to gather some of his native currency—shells and circular stones—scattered about in the 30 platforming levels that you must navigate.

The instructions, illustrated in little cut-scenes before the beginning of the first few levels, are also in Japanese. I won't rob you of the joy of discovery, but it will spare you a lot of frustration to know that every mechanic in Escargone can be activated by a single click, by repeated clicks, or by holding the mouse button down. Jumping, the most basic and essential, is accomplished by a single click. I can't say at all by what means a snail is capable of jumping, but we'll let Gone worry about that.

Analysis: This game could be regarded as belonging to the Early Period of SKT's work, due to a few significant flaws. Aside from a few gameplay issues, the graphics and music are polished, but rather devoid of the quirks and charm of, say, a Moai game. After a few repetitions, the music will send you looking for the mute button, only to find none. No complaints about the sound effects, which include spoken bits presaging those in later SKT games.

As far as accessibility, Escargone is in a category of games that is inherently easy to operate. Most players should have little trouble playing it, although the repeated clicking has to be done at a rate that those with particularly slow hands might find to be a strain.

On the other hand, the level design can make the one-switch controls frustrating. Missing a jump can often mean not only having to try again, but also having to wait for the snail (an aptly chosen character, it sometimes seems) to crawl to a wall, hit it, turn around, and crawl all the way back to where you tried to jump. On a few occasions, this means traversing the entire width of the level twice, a punishingly tedious process when there are no more items to collect.

And while we're speaking of item collection, in spite of the added points they confer, collecting all the seeds is challenging only in terms of false difficulty: They are difficult to collect because doing so is a strain on your attention span. As someone who obsessively collected every possible ring in the Sonic games, I am especially saddened to say that (although that may say more about me than about the game).

But where these issues don't take you out of the game, Escargone is genuinely fun, particularly after all the elements are introduced—you must use every skill you have learned in combination to solve tricky timing and jumping puzzles. At this point, it starts to feel like a real platformer, rather than a one-switch adaptation of the platform genre.

In sum, Escargone is hardly an infinitely replayable game, but it is eventually rewarding to the patient player.

No worries about telling us about your disability. It's very thoughtful of you to find games that others can play. I also know what it's like to be physically disabled; it's my leg, but I had been physically active before I got hurt. I know how you feel, man.

Cool game. Glad you rec'ed it.

It seems there's a bug at level 19: if I understand correctly, you need to hold the mouse button to activate the switch... But the snail doesn't stop when I do that, it only slows.
Anyone else meeting the same problem?

It's great to see that Jay is Games is working to be accessible to more people! Thanks Gabriel, keep up the good work.

Regarding the button on Level 19:

yep, can't do the switch, HELP!

OK, got it.
I knew I should've taken Japanese in college instead of Spanish!

Does anyone else laugh everytime you hear "Stage Clear"?

I think that's a great thing that you folks are reviewing games with accessibility in mind. I think generally you folks note when a game requires hearing ability too. Maybe you folks could make a couple tabs or links on the sidebar that indicate "Accessible" games- or at least indicate whether a game is accessible or not so they can all be brought up with a site search. I think that might be a great help to folks.

Just in case anyone is interested those oval things you pick up are shells.

Escargo is actually a type of french snail and they sure are delicious!

Nice to see a creative gameplay concept developed so thoroughly!

On the accessibility issue, I have some RSI, and I find the keyboard much less strain than a mouse button (that fishing girl game was too painful). This game would work as well with the space bar (or any key). Is there a way to simulate a mouse-button press with the keyboard, for Flash?

My Japanese reading skills are very basic. Here is what I have gathered; hopefully somewhat more fluent will come around.

1. The Moa is the snail's boss (the little plate in front of him says "President of the Company"). The snail's name is Gone.

2. The Moa has sent Gone down to earth to collect money to buy more booze and golf clubs.

3. From anthropology class: in some cultures in the South Pacific, shells and big circular stones with holes in the middle are used as currency.

4. The Moa uses an informal speech-style with Gone, which means that he doesn't have a whole lot of distancing respect with him. This means that either they are close friends or that the Moa treats Gone like a pet or slave. Since they are in such tight quarters, I think it's a bit of both.

5. The little blurbs going along with the tutorial movies are basically just stating the obvious or giving encouragement. There could be some kind of humor that I am definitely not capable of picking up.

6. All the squares that do something are called "Panels," e.g., "Jump Panels" "Booster Panels", etc. I didn't get all of them.

I know this is just a sketch, but I hope it helps.

it's about time people involved disabled into media and games instead of pretending we're not here. keep it up.

Thanks to all who sleuthed out the plot--I'll update the review accordingly when I have a chance.

Don't feel bad if you got caught up on the switch. I did too. :)

Does anyone know how to beat level 23? I can't press the button quickly enough.