Eschalon: Book II, the second in a planned trilogy of RPGs from Basilisk Games, takes place two years after the original game. You, as the hero from the first title, have been living a quiet life in the neighbouring lands. So quiet, in fact, that your skills have begun to slip away, and you've been having strange dreams. Still, you might be inclined to forget your former life entirely... if not for the note you wake to find on your doorstep one morning, from a stranger who says he knows who you really are. Throughout your journey, you'll discover your true identity, uncover a secret invasion, contract various diseases, camp out in thunderstorms, and become a connoisseur of scavenged cusine. Might I recommend the spider's legs? They're rich in protien and vitamins! 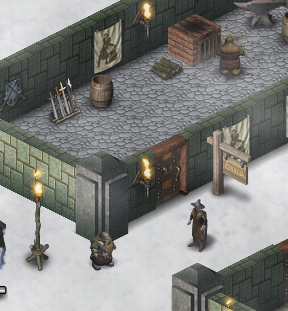 Not much has changed on the surface; Eschalon is still a top-down isometric turn-based RPG that encourages you to go out there into the big open world and explore. Go on quests, find treasure, level up, and kill or be killed. (Although for the first little while it'll probably be the latter.) There's not much of a tutorial to be had, but a few minutes of fiddling around is enough to learn the ropes. The game is controlled with the mouse, and you simply click and hold to move your character in that direction, or click on something to interact. Whether that interaction is friendly or the sort of thing that involves an arrow through the back of one's head is entirely at your discretion.

If you're hoping to continue on as your character from the original game... well... you can't. Not really, anyway, even though everyone assumes you are that person. You have to start over as a fresh level one hero, and while this makes the game more accessible to newcomers, it might be a disappointment to players who had expected to import their old character and face off against even bigger challenges. Members of the fairer sex may be happy to see the game allows you to create female characters this time. Of course, no matter what, you're stuck with the same mannish brown-haired character sprite. I call her "Maude".

Other changes include the ability to set or remove various gameplay restrictions to get bonuses, new skills, and, my favourite, the addition of weather that affects gameplay. How, you may ask? Ever tried to light a torch in the middle of a rainstorm? Or cast a fireball during one? How about navigating in the dark during flashes of lightning? And you probably don't want to be forced to camp out on a frozen lake during a blizzard. 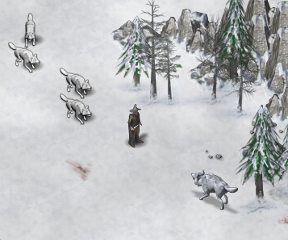 Analysis: There have been a lot of comparisons drawn between Eschalon and Oblivion, which sort of surprises me since the first thing I thought of when playing were the earlier Ultima titles mixed with a dose of Avernum. While I've always been the sort of party-pooper who prefers strong story over open world gameplay, I have to admit Eschalon does the latter really well. Upon receiving the main quest, I promptly ignored it and spent a week tramping around the landscape until I was Level Ridiculous and adorned in the rainments of the Gods. Not without trial and error, of course, since the game can be fairly punishing in the beginning, but once you gain a few levels and equip yourself with armor that doesn't shatter when you sneeze, you'll find the going a lot smoother.

On the whole, the writing is actually rather good. But if you're hoping to create a charismatic and witty hero... don't. Your role in conversations is to sit there like a muppet while the NPCs deliver exposition, then deliver some variation on the ol', "Yes sir, no sir, may I have another, sir?" The plot is fairly standard for a game of this type, centering around your quest for the Daily Magical MacGuffin, and of course you'll find crosses and double-crosses aplenty. But purely as a vehicle to drive the experience, it works well within the setting and serves to take you to a lot of different locales. 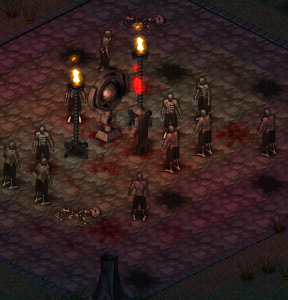 Most of my complaints with Eschalon are purely mechanical in nature. The complete absence of path finding is annoying, especially coupled with how slowly your hero moves. Mediocre enemy AI makes even boss battles relatively easy. But for me, personally, the biggest downside is how sparsely populated the world is. Most areas are massive, and it's such a shame that you can spend so long tramping from one side of the map to another and only encounter a few enemies, and virtually no people. Even the towns and cities are largely bare, and the overall feeling is that the world is a stage staffed by a skeleton crew of actors. A few more travelers, a few more random encounters or NPCs with something to say, would have gone a long way towards improving the immersion of the whole experience.

But even with those quibbles, ultimately, Eschalon: Book II is just a whole lot of fun. Fans of classic top-down RPGs will find a lot to like, and the large world not only encourages exploration, it rewards it, with secrets and treasure hidden in some surprising places. There's also a bonus add-on adventure called The Secret of Fathamurk that will be included for free in an upcoming update, and add another 5-10 hours of playtime. You can expect to play for a long while anyway if you're intent on uncovering everything. Eschalon: Book II is a solid, fun title with a lot to offer, and is definitely worth a look. After all, how many RPGs can you say you've caught tapeworms from a corpse in lately? Sounds like good, clean family fun to me.

I'd like to weigh in and say I really loved this game series. It's possibly the only game I've ever paid to download online. The review is spot on with the good and bad points.

For the rest of September the DVD costs the same as the download only, so I suggest buying the DVD - you can download and play the full game while you wait for the DVD to be delivered :)

Loved this game, spent a good 35 hours on it. By all means, see it through to the end, the story is quite worthwhile and surprises plenty near the end :)

Really liked it!! i'm doing my third playthrough with a cleric , and it's still fun to play, and i seldom do more than 1 playthrough!!

A great game to anyone that likes a game that it's not a cakewalk ,but with experience and try and error , gives rewards.

This is a great game and it is for Linux aswell, which is awesome.

Minecraft and this are my two best Linux Games.

Morning. I've been playing the game now for about 50hrs, and I am stuck. I put the book on the table and the 4 bells on the tree in Port Kuudad, the bell sounded...then nothing. I saw a bony diasore in one room, went back upstairs and saw the Saint...but now I am lost and don't know where to go next. Please help...I do like this game, as well as book 1.
Gary.